Wipe out or turn the human population into Orphnochs.

Kyoji Murakami, secretly the Rose Orphnoch, is the head of Smart Brain and the main antagonist of Kamen Rider 555. He seized control of Smart Brain from Hanagata and seeks to use the company as a front to forcibly convert humanity into Orphnochs.

He was portrayed by Katsuyuki Murai.

Murakami seized control of Smart Brain after Eiichi Toda's death, enlisting Lucky Clover to carry out his plans and eliminate any rogue Orphnochs. However, Hanagata retakes Smart Brain and ousts Murakami from the company, giving control to Yuji Kiba.

Murakami soon learns that Teruo Suzuki is the host of the Orphnoch King. Murakami attempted to abduct Teruo, causing him to come into conflict with the Riders. Injured and barely escaping their attacks, Murakami sacrifices his life to Teruo in order to awaken the Arch Orphnoch, correcting its genetic instability.

In the alternate conclusion shown in the SIC Hero Saga, Kamen Rider 555: Lost World, Murakami hatches a plan to turn the whole Earth populations into Orphnochs by dispersing the blue-colored flower petals. He also created the Riotrooper V2 Gear which he used in combat. Armed with the Faiz Edge, he battles Delta and Kaixa. Both of them smash his helmet, revealing the face of Rose Orphnoch. When Kaixa and Delta cannot stand up to the Riotrooper V2, they run away with Mari. But then Kusaka grabs Mihara and tosses him back at Murakami, saying that he deserves it for daring to send roses to his beloved woman. Mihara screams that it is a misunderstanding, and for Kusaka to help him, but Kusaka just sneers and a blue petal lands on his outstretched hand, turning him to ash.

Faiz arrives on the scene and runs into Murakami, now in Rose Orphenoch form as the Riotrooper V2 Gear was badly damaged. Murakami uses Delta's mission memory to power up a Faiz Edge he had and they fight a bit. Mari then shows up and tosses Faiz the Faiz Blaster. Murakami curses her; He was hanging around the area because he was looking for it. Faiz assumes Blaster Form, and use the Photon Field Floater to cut off Murakami's head, and goes home.

Murakami's head is rolling about when the Lion Orphnoch picks it up. Murakami asks him to bring him back to the Smart Brain headquarters, and to recover Delta's belt at the same time; they will be using it to make the "Emperor's Belts". The Lion Orphnoch, seemingly a foreigner, speaking in broken Japanese, says that he will do so on the condition that he gets one of the belts; Murakami promises him the belt of the sky, the Psyga Driver.

Kyoji appears as the central antagonist of the movie, now a head being kept alive in a tank. He had Leo aka Kamen Rider Psyga lead an attack on the human refugee settlement "Paradise" to demonstrate the power of the first Emperor's Belt, the Psyga Gear. While trying to find an ideal user for the second Emperor Belt, he realized that Yuji Kiba is the perfect Orphnoch for this and has Smart Lady to disguise herself as Mari in order to turn him against humanity.

With Kiba was proven equally matched with Kamen Rider Faiz Blaster Form, Murakami unleashes Elasmotherium Orphnoch to finish Faiz off but but it fails when Orga sacrifices himself to protect Faiz and Mari.

His head was later smashed by Smart Lady under orders from the Wirepullers of Smart Brain for his failure to defeat Faiz, dying with a loud scream. 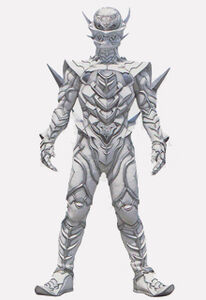 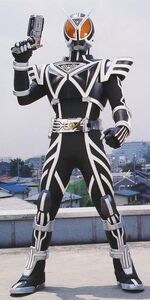 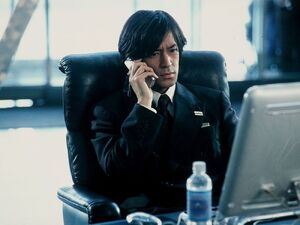 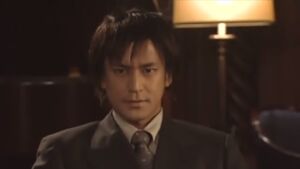 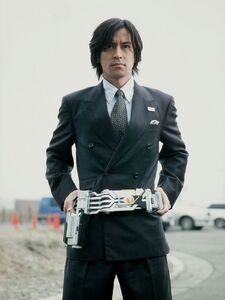 Murakami with the Delta belt. 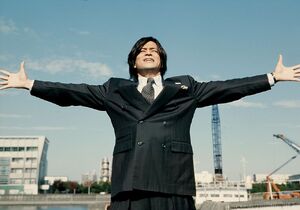 Murakami offering himself up to the Arch Orphnoch to correct its genetic instability. 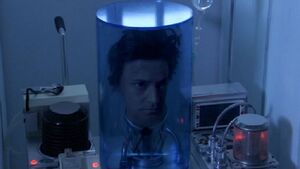 Murakami as a disembodied head in Kamen Rider 555: Paradise Lost. 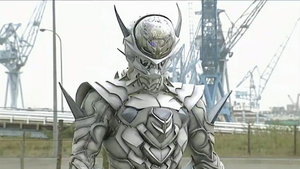 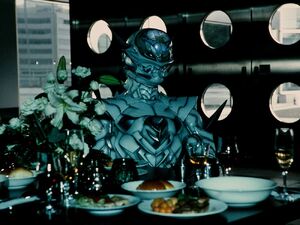 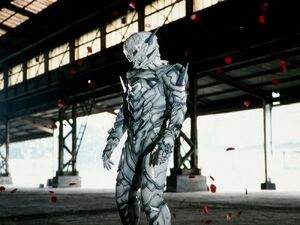 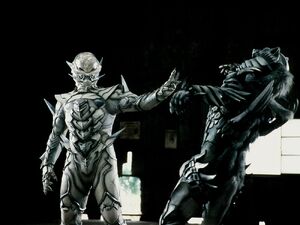 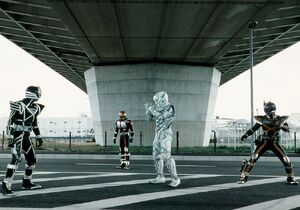 The Rose Orphnoch facing off against all three Riders. 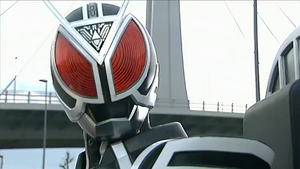 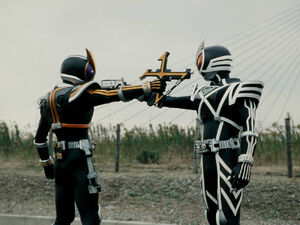