Very skilled swordswoman, able to blast fire, sand projectiles etc. out of her sword, controlling weather such as shooting lightning out of the sky, skilled hand-to-hand combat

Murdering people at night, hanging out with Ayumu Aikawa

Serial Killer
Kyoko is one of the main antagonists of the novel and anime series, Is This A Zombie?, being the serial killer who killed Ayumu Aikawa.

She was voiced by Noriko Shitaya in the Japanese version of the anime, and Lindsay Seidel in the English version.

She has yellow hair which was made into twin pigtails, and has gold yellowish eyes. She was mostly seen in her Masou-Shoujo outfit.

Kyoko presents herself initially as a quiet, gentle, soft-voiced, authentic, and kindhearted girl, albeit one overcoming physical injury along with psychological and emotional trauma. However, this turns out to be a mere facade, as Kyoko reveals herself to be a skillful practitioner of deception, easily being able to act and present herself in ways that do not reflect her true self.

Once her charade ends, she reveals her actual personality, being that of a cruel, ruthless, egotistical, and sadistic individual who takes great pleasure in killing other people and being involved in intense combat. When fully immersed in combat, she quickly enters into an almost manic, crazed state of mind, laughing hysterically and contorting her face in a psychotic manner. She also possesses a volatile, rapid-fire, and temperamental temper.

This can work against her, especially in situations in which she loses her advantages, and when her opponents or victims try to reason with her, especially in the context of normal ethics and morality. In addition to this repertoire of malevolent traits, she also has a strong fear of her own death. If she loses all of her extra lives, much of her power, and is subjected to prolonged, intense physical assault, she will lose her composure and degenerate into a pusillanimous, trembling, fearful, and teary state.

After her defeat at the hands of Ayumu Aikawa, her personality underwent a dramatic change, specifically during her extended struggle against Ariel and her eventual imprisonment following her second defeat. During the interrogation performed by Ariel, she showed some of her past traits, such as anger, tearful submission, and manic, psychopathic tendencies. Despite these examples, she displays the full change once she is able to gain a temporary parole to return to Earth.

While in the company of Ayumu and his friends, despite her maneuvering and verbal antagonism towards Ayumu's friends, she made no attempt to harm anyone despite her behavior and verbal hostility. While displaying that she still had manic, psychopathic tendencies, she also makes clear that she had long since abandoned her blood lust and impulsive urges to harm others, no matter how she behaved. She also admits that she had reflected on her past actions during her confinement, which indicates that she has learned the value of accountability and the need to be responsible for one's actions. 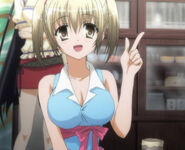 Ayumu about to finish Kyoko

Kyoko possessed by the King Of The Night

Add a photo to this gallery
Retrieved from "https://villains.fandom.com/wiki/Kyoko_(Is_This_A_Zombie%3F)?oldid=3705440"
Community content is available under CC-BY-SA unless otherwise noted.