Kyokotsu is a minor antagonist of the Mt. Hakurei arc in the anime/manga series Inuyasha. He is the first of the Band of Seven to appear and the weakest of the group overall. He faces Kōga with his superhuman strength, but loses to him easily.

He first appears when two monks discover a massive giant who had been eating all of the demons of the mountains near Mt. Hakurei. He had been doing so to regain his strength.

Unlike most of the Band of Seven, the jewel shard is located in his head as his neck was far too thick to put the shard in.

He was voiced by the late Daisuke Gouri in Japanese and by Dave Ward in English.

Kyōkotsu first appears in chapter 234 of the manga and 102 of the anime. Following the unusual disturbances that had forced most of the eastern wolf tribe (in the anime) to flee their territory/hounded an old wolf that tried to escape some attacking yōkai, Kōga decides to investigate the wolf's claims of a giant spectre devouring every yōkai it came across, reeking of bones and graveyard dirt.

Later, two wandering monks discuss rumours of an oni being seen nearby, with the older monk reassuring his companion that his power would be enough to take it down. Sure enough, they encounter the grotesque sight of Kyōkotsu in the middle of eating a yokai, scaring them out of their wits and making them run away. Kyōkotsu lingers long enough to meet up with Kohaku, who informs him that the "others who have jewel shards" are coming soon. He tells Kohaku that he's lucky to have his brothers along with him for the job and dismisses him, but changes his mind as he tries to take Kohaku's shard for himself. Kohaku slices his arm off with his kusarigama and warns him to behave, the presence of saimyoshō indicating that they're being watched. After Kohaku leaves Kyōkotsu reattaches his arms and comments to himself that his life is precious, considering he just left the grave.

Kōga and his wolves are approaching a copse of trees on the leeside of the mountain just as an enormous hand bursts through the rock, revealing Kyōkotsu, who learns about Kōga's shards and arrogantly announces that he'll be taking them along with his life. Kōga identifies Kyōkotsu as the spectre due to his scent. Kyōkotsu, surprised that he still has a distinct smell, simply replies that since he was resurrected not long ago, he needs to bulk up by eating everything he can and says that Kōga will make a good snack for him. Kōga easily repels his first attack, but Kyōkotsu recovers fast enough to deduce that his two shikon shards are in his legs. Kōga demands to know what Kyōkotsu is exactly since he doesn't have the odour of a human nor that of a yōkai or any incarnation of Naraku.  Kyōkotsu replies that he's human, to which Kōga expresses his incredulity at a "normal human" just crawling out of his grave. Kyōkotsu points to a jewel shard lodged in his forehead, explaining how he was revived. Kōga demands to know where he got the shard, but Kyōkotsu claims it's pointless since he's about to get eaten.

Kōga has no problem dodging Kyōkotsu's attacks but is surprised by the few tricks Kyōkotsu has. After snapping his neck and seemingly killing him, he's caught off guard as Kyōkotsu's hand sweeps him up from under the rocks and brings him closer to his face in order to consume him. Kōga recovers quickly and manags to thrust his arm out into Kyōkotsu's forehead, with Kyōkotsu mocklingly claiming that it doesn't even hurt. Before he gets another chance to gloat, Kōga rips out part of his forehead along with his jewel shard and Kyōkotsu soon decomposes into a giant pile of bones that pin Kōga down.

He sees a solitary saimyōshō insect carry off Kyōkotsu's shard and realises the one behind Kyōkotsu's resurrection is Naraku. 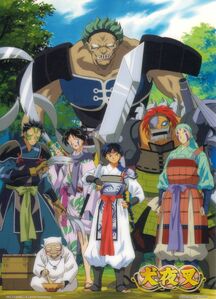 Retrieved from "https://villains.fandom.com/wiki/Kyokotsu?oldid=3870020"
Community content is available under CC-BY-SA unless otherwise noted.