Kyrie Ushiromiya is an antagonist in Umineko no Naku Koro ni. In the anime, she was Ange and Battler's mother and Rudolf Ushiromiya's wife.

She was voiced by Atsuko Tanaka, who also voiced Caster in Fate/stay night, Trish from Devil May Cry, and Reiko Tamura from Parasyte.

At first, Kyrie doesn't appear as a villainess, but the seventh game seems to prove otherwise. She and Rudolf kill the entire Ushiromiya family and all of its servants in order to keep the gold for themselves. After Rudolf is killed, she reveals to Eva Ushiromiya that she never really loved her daughter Ange, and considered her a bond with the recently deceased Rudolf. It has been confirmed that Beatrice herself opposes them. She is later killed, and Eva adopts Ange. It is unknown if she and Rudolf were truly the perpetrators, or if Bernkastel had any say in this or made this up...

Kyrie also had a villainous younger sister named Kasumi Sumadera, who hated the older for passing down family duties to her. Despite Kyrie's death, the only thing that would appease Kasumi would be Ange's death.

Kyrie is a cool and collected, individual; having a very analytical way of solving problems such as her famous "flip the chessboard" strategy that Battler takes to heart. Despite that a core trait that defines her is envy, due to her mad devotion to Rudolf, often holding grudges such as with his first wife Asumu.

Kyrie is a woman with boyishly short white hair and onyx eyes. She wears a long black coat, a purple long sleeved purple shirt underneath with a black tie with a cross on it, black buckled belt, black pants and black shoes. 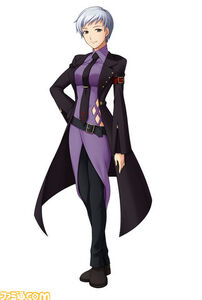 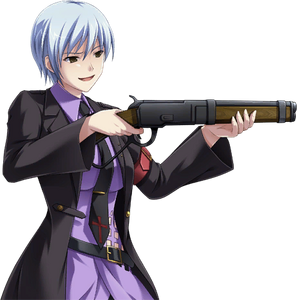 Retrieved from "https://villains.fandom.com/wiki/Kyrie_Ushiromiya?oldid=4260113"
Community content is available under CC-BY-SA unless otherwise noted.