King Leopold's envoy in the Kongo

Antagonizing Tarzan by using his wife.

Deliver Tarzan to the hands of Chief Mbonga in order to fulfill his part of the deal with Mbonga which will allow him to obtain diamonds and bring them to the King himself (both failed).

Captain Léon Rom is the main antagonist in the 2016 reboot film The Legend of Tarzan, based on the fictional character of the same name created by Edgar Rice Burroughs.

He is a faithful servant of King Leopold who wants to capture Tarzan for a reward in diamonds and take the power in the region of the Kongo. He is Tarzan's arch-nemesis.

He was portrayed by Christoph Waltz, who also played Ernst Stavro Blofeld in Spectre, Mandrake in Epic, Bert Hanson in Horrible Bosses 2, Benjamin Chudnofsky in The Green Hornet, Walter Keane in Big Eyes, Cardinal Richelieu in The Three Musketeers and Hans Landa in Inglorious Basterds.

Léon Rom is the envoy of the Belgium King Leopold in the Kongo. As Belgium is facing bankruptcy, Rom has been sent to retrieve the Kongo's resources. During one of these expeditions in which Rom and his escort are searching for diamonds, they are ambushed by tribesmen of the Mbonga clan. Although the tribesmen are at first swiftly massacred by the rifles of Rom's men, the group later stumbles into an ambush and are in turn slaughtered by the Mbonga. During this massacre, Rom hides underneath a tribesman's shield and endures the battle as the only survivor of his group. After emerging from underneath the shield, Rom sees that he's surrounded by the Mbonga. One of the Mbonga attacks Rom but Rom swiftly the men's neck by stringing him with the spider silk string attached to a wooden crucifix he is wearing as a lucky charm. After the man is dead, Rom is approached by the tribe's chief. Rom talks to the man, revealing that he came only for meeting him. The chief claims that Rom has come for diamonds and offers him not only his life but also the diamonds Rom so desperately wants. In turn, he demands that Rom delivers Tarzan, now a lord in England, to him. Rom agrees and is allowed to leave the jungle.

To fulfill his part of the deal, Rom invites Tarzan to Kongo, seemingly to see what progress has been made during his absence. But when Tarzan, his wife Jane and the American Dr. Williams, who suspects Rom of slavery and wants to expose him, arrive at a village of Tarzan's and Jane's old friends, the village is attacked at night by Rom and mercenaries he hired. The mercenaries round up the villagers and Rom, who is speaking to the village elder, personally shoots the man after he refuses to kneel before him. His men then capture Tarzan and Jane and Rom and his group leave with their captives, torching the village on their way out. However, on their way back to their steamboat they are attacked by Williams and more villagers. Although Rom manages to flee to the boat with Jane and villagers they took as slaves, most of his mercenaries are shot and Tarzan can free himself. Back at the village, Tarzan decides to go after Rom to free the slaves and Jane.

On the boat, Rom has Jane tied up on the railing as they make their way downstream. He reveals that he is completely confident that Tarzan will come for her.

On the evening, Rom has Jane delivered to his cabin to dine with her. He threatens her with drowning the slaves they took from the village (Jane's friends from her life in Africa) should she behave unladylike. During the dinner, Jane spots Rom's crucifix and asks him if he is religious. He tells her that he got it from his priest when he was nine year old. To insult him, Jane indicates that Rom was abused by this priest but Rom misses it. When Jane attempts to grab a knife from the table, Rom swiftly ties her arm with his crucifix, cutting into her flesh with the silk string. After a short painful seconds, Rom releases Jane's arm but also threatens her that the silk can also be used as a necklace. Further into the dinner, Rom also claims that after he saves his king and nation from bankruptcy he will never be forgotten. He reveals to Jane that he plans to deliver Tarzan to the Mbongo chief and Jane is visibly shaken. Having anticipated this reaction, Rom curiously inquires what exactly Tarzan did to the chief to have earned the man's wrath. Jane tells him that Tarzan killed the chief's only son. Jane also threatens that this is nothing compared to what Tarzan will do to Rom. Rom confesses that Tarzan's wildness disturbs him. He then asks Jane to put his knife, which Jane secretly stole during their conversation, back on the table. As her friend is still in danger of being drowned, Jane is forced to comply. He then orders his men to take Jane out of the cabin.

During their pursuit of Rom, Tarzan, Williams and members of the tribe intercept a Belgian military train carrying captured slaves, providing Williams with the evidence he needs to expose King Leopold. They also discover that Rom intends to use the diamonds to pay for a massive army to subdue the Congo, and allow Belgium to mine its wealth for Leopold's benefit.

On the way downstream, Jane tricks one of Rom's mercenaries into punishing her by dropping the cage containing Jane's friend into the river. To Rom's horror, Jane jumps after him, opens the cage and the two head for the riverbank. Rom's mercenaries open fire but Rom stops them, afraid that they could kill Jane. Rom can only watch as Jane escapes attacking hippos and runs into the jungle, astonished at her willpower and stubbornness.

With his men, Rom lands on the riverbank and the group heads into the jungle. They soon find Jane in midst a group of monkeys (Tarzan's old pack) but Jane's friend has fled to warn the clans. Although everything seems to go well with the apes, chaos ensues when one of Rom's men shoots a monkey. The other mercenaries open fire too, to the horror of Jane. Rom orders retreat, unaware that the noise has led Tarzan to their location. Together with the apes, Tarzan kill one of Rom's struggling men as revenge. Tarzan then cries his Tarzan scream, alerting Rom and the rest who have just reached the border of the Mbonga lands. Tarzan furiously pursues them and arrives at the place where Rom's first expedition was slaughtered by the Mbonga. He sees Rom entering his steamboat once more, escaping with Jane, his remaining men and the diamonds the chief promised him. Tarzan is then attacked by the Mbonga, allowing Rom to escape.

However, Tarzan is able to settle things with the Mbonga and continues his pursuit of Rom. He unleashes his scream once more to let Rom he is coming and gets the exact result he's hoping for - Rom is horrified. He arrives at a settler colony where he sees the ships supposed to bring him and the diamonds back to Belgium on the horizon. Before they arrive however, Tarzan leads an army of animals into the city., Rom and his remaining men run onto the streets, attempting to reach the harbor with the diamonds to complete their mission and to escape. Although he loses his hostage Jane on the way, Rom manages to escape chaos once more on his steamboat, heading for the nearby fleet. Before he can arrive, Williams uses a stationary MG at the harbor and riddles the steamboat with bullets. Meanwhile, Tarzan enters the sinking boat to get revenge on Rom. Unable to find him, Tarzan instead takes the diamond chest. Using the opportunity, Rom ambushes Tarzan and attempts to suffocate him with the silk cord from his crucifix. He does not realize however, that the bay is riddled with crocodiles who are approaching the sinking ship. While he gloats over Tarzan who gasps for air, he becomes to overconfident and Tarzan uses the opportunity. He frees himself from the cord and kicks Rom onto the deck below which is almost completely overflown. Seeing the crocodiles heading his way, Rom grabs the cord Tarzan is still holding, pleading for Tarzan to save him. However, Tarzan lets go of the cord and watches as Rom is devoured by the crocodiles.

Leon Rom is a highly intelligent and smart person, seeing himself as much smarter than Tarzan and his own men together, which means that he is also an arrogant egotist. He is an extremely powerful, controlling, cunning, intimidating, dark, cold, remorseless and very cruel man.

More than that, he is best known for his ruthlessness as he sees that nothing will stand on his way to achieve his goals, and he also controls his men with an iron fist, which means that he is a tyrannical individual. In addition, he is a relentless man as he never stops in his way to gain his goals and wants to prove that he is the best servant for the King. He is as well a megalomaniac as he gloats about knowing that Tarzan will come and he will be waiting for him.

Despite his ruthless personality, Rom seems to be a very emotional man and a gentleman. After kidnapping Jane, he has a dinner with her in which he shows her that he is a gentleman and a civilized person like her.

Rom has dinner with Jane

Rom can only watch as Jane escapes 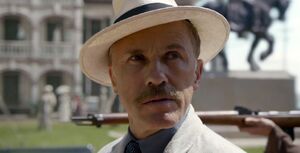 Rom begs Tarzan to save him moments before his death