Get revenge on the Argents

Find the pike that was used to kill him

Lycanthropic Serial Killer
Sebastian Valet, more commonly known as La Bête du Gévaudan, or The Beast is one of the two main antagonists (along with the Dread Doctors) in the second half of the fifth season of MTV series Teen Wolf. La Bête du Gévaudan is a French legendary ancient werewolf and is described as “History’s most vicious, most famous werewolf.”

He was portrayed by Gilles Marini.

Sebastien Valet was a French soldier/serial killer known by the name of the Demon Tailor of Châlons. As his shtick, he lured children into his shop in Paris where he would kill them, boil them and eat them. The court ordered that all records of the case be destroyed, thereby erasing his memory from history. He became a werewolf in the 1760s after drinking rain water from the paw print of a wolf. This allowed him, through unexplained means, to transform into a monstrous werewolf whose body is surrounded by smoke-like shadows.

Once the man became the Beast, there were a number of very different descriptions of it. Witnesses apparently described everything from a red-furred giant wolf to a cloven-hoofed panther the size of a horse. According to Argent Family lore, the Beast's body was oil-black, solid but shapeless at the same time. It was like a shadow pretending to be real.

Officially, the Beast is accused of killing 113 people. According to the Dread Doctors, via Theo, the death toll was closer to 500. During the time of the original attacks in Gevaudan, many people believed that the Beast simply killed for sport, as it never ate its victims nor even for vengeance and would only target the head and neck of its prey.

The only weapon in fact possibly that historically proved effective against the Beast was a steel pike wielded by The Maid of Gevaudan. The steel was made from Wolfsbane and Mountain Ash and was forged with the Maid's own blood under the light of a full moon.

After his death, Sebastien was effectively erased from history. His sister burned everything he signed and everything he owned in a practice known as Damnatio Memoriae.

The beast is first mentioned in Season 1, when Allison Argent learns that one of her ancestors killed the beast after his wife and four children were first to fall prey to the creature back in south-central France during the 1760's.

Centuries later, the beast is resurrected by the The Dread Doctors in order to have it kill for them as they wish to steal its power. It managed to possess Mason as he had a genetic disorder, possibly a chimera, and had twin syndrome. During this time, the beast continuously hunts down most of the townspeople during this time as Liam and Hayden are chased by the Beast and, later, Scott and Stiles investigate the remains of its previous attack. The Beast menaces the Chimeras Theo and Tracy when two of the Dread Doctors tell Theo to stay out of their way and not to interfere in their plans. Later, the hunter Chris Argent visits his father Gerard Agent, getting his help and information on what he knows about the monster and how to defeat it.

The werewolf later shows up and attacks while Malia and Breaden rescue Dr. Deaton and while Malia is fighting the desert wolf. The Beast later appears and nearly attacks Deaton until Malia pulls him away just in time. The Beacon Hills Sheriff's department leads a chase on the creature that leads to the hospital. Meanwhile, Scott discovers bloody footprints that change from animal to human. The Beast then sets a trap to lure Scott's pack to their doom but is thwarted by Hellhound Parrish. Later, it appears at the school causing the crowd to run inside. He comes back and then terrorizes the school, it runs the halls and attacks Scott multiple times but during the last encounter, Scott catches it scent. The creature later forms around Mason without a frequency and appears to kill two of the Dread Doctors. When it changes back into human, it is revealed to be Sebastien Valet in Mason's place. Sebastien causes havoc through Beacon Hills in order to find the pike that killed him in the past. As he fights Scott, she sees memories of Allison and believes her to be Marie. Distracted, Scott is able to subdue him long enough for Lydia to bring Mason back. Left as a shadow, Sebastien tries to escape only to be stopped by Parrish and impailed by Scott with the pike, killing him once and for all. 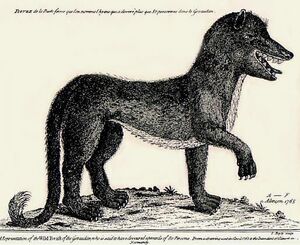 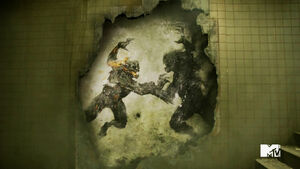 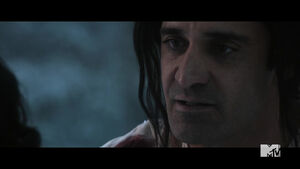 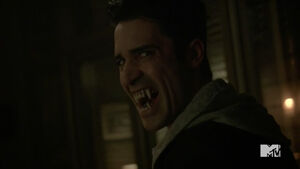 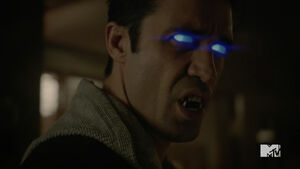 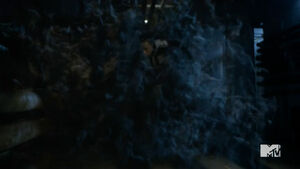 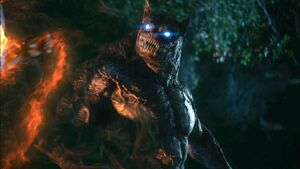 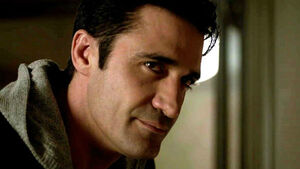 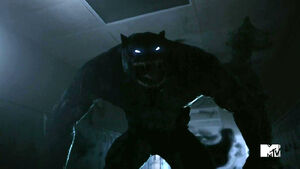 The Beast
Add a photo to this gallery