Villains Wiki
Register
Don't have an account?
Sign In
Advertisement
in: Female, Tragic, My Hero Academia Villains,
and 27 more
English

Accomplish Gentle's goal of making him a famous icon in history.

Manami Aiba, also known as La Brava and sometimes Loverlover, is a major antagonist in the manga/anime series, My Hero Academia. She serves as the secondary antagonist of the U.A. Cultural Festival Arc.

Originally a simple schoolgirl that was a fan of his videos, La Brava is a villainess that now acts as Gentle's partner in crime, in which she will do everything she can to make sure Gentle accomplishes his goal of becoming a famous villain in history.

She is voiced by Yui Horie in the Japanese dub of the anime and Megan Shipman in the English dubbed version.

La Brava is extremely loyal to Gentle, dedicating her whole life to his, which Gentle much appreciates. It is later revealed that she is indeed in love with him and that her love for him would serve as the means of strengthening Gentle and his abilities.

While she is a criminal, she is not outright villainous. Like Gentle, she believes that what she is doing is right for both him and her, regardless of the path they walk on. She is genuinely friendly and expresses worrisome whenever she sees Gentle in a dangerous situation. Unlike Gentle, La Brava isn't necessarily seeking to become famous, but to simply make sure Gentle's dream becomes a reality.

Manami Aiba was once a schoolgirl at Junior High where she would often write letters to a boy she had a crush on. In return, the boy thought of her as nothing more but a stalker, causing her to lose motivation in herself. It wasn't until she came across one of Gentle's videos of himself, which lead her to meeting up with him, wanting to do everything she can to help him.

La Brava is first seen recording Gentle on her phone as he finishes robbing a store. When he meets up with her, she informs him that the video's views are stagnating, despite how "awesome" he was. Gentle didn't show much concern, however, and continued on as he accidentally spills his tea on her.

Eventually, the two returned back to their hideout, in which La Brava began to upload the video, while also admiring one of Gentle's past videos. The two then prepare to film their next video regarding Gentle's next project. While they travel around the city brainstorming their idea, the video La Brava uploaded receives negative comments. Despite this, Gentle continues to ignore them.

Gentle is later seen working on his plan, which involves invading the U.A. Cultural Festival, believing that if he were to launch an attack, he will gain the fame desires. When La Brava asks if he plans to get the students involved, Gentle believes that him invading the school would be enough to get their attention, much to La Brava's admiration.

Eventually, the two partners begin to head off in the city, as they follow their own route to U.A. They end up encountering one of the students, Izuku Midoriya, who was tasked to bring back rope. They attempt to make their leave, but Midoriya was able to figure out Gentle's disguise, causing the two to drop the act. Gentle then prepares to take on Midoriya, while La Brava prepares to film the battle.

While Gentle faces off against Midoriya, La Brava does her best to keep the camera recorded. Once he was able to blast Midoriya away with his Quirk, Gentle continued to move forward to U.A. with La Brava. La Brava eventually remembers Midoriya as the student from the Sports Festival, causing Gentle to keep a further distance away from him. However, Midoriya was eventually able to catch back up and knock Gentle back into a construction site.

La Brava continues to film while staying out of the battle. She attempts to call out Gentle for him to get out of the situation, which he does by using a construction beam and launching the two away once more. The two then land nearby close to the school, but Midoriya was able to reach them once more, pinning the two down to the ground. Eventually, La Brava uses her Quirk and bestows her power on Gentle, giving him a tremendous boost in strength, and causing him to overpower Midoriya.

As the two continue to battle, La Brava begins to hack into U.A.'s internal network, in order to disarm the alarms. However, she is unable to receive a connection, so she makes a further attempt by moving closer to the school, until she is caught by Hound Dog and Ectoplasm. Immediately, she runs back to Gentle, only to find him defeated at the hands of Midoriya. She attempts to stop Midoriya, refusing to let him turn in Gentle, while Gentle simply wishes for her to run while she has the chance. However, he soon realizes that if she were to escape, she will begin committing far worse crimes in his name.

Gentle then decides to take the blame for himself, in which he blasts Midoriya away from the scene, while he remains comforting La Brava, as Hound Dog and Ectoplasm confront the two surrendering. The two are then eventually taken to a police situation. Two officers look over La Brava's computer, in which they were impressed by her computer skills. They asked if she was ever interested in using her talents for the world's sake in which she says no, as everything she does is for Gentle's sake.

La Brava is not much of a fighter and mainly remains hidden in battles, while Gentle is the one that directly gets into conflicts. Despite this, however, she holds a trump card that serves as Gentle's mean of winning battles, as well as her own techniques that provide good use outside of battles. 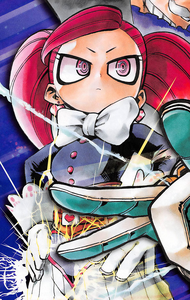