The Woman
The Woman In Black

Kill Sarah Scarangelo and raise her baby as her own (succeeded).

La Femme (French for The Woman) is the main antagonist of the 2007 French horror home invasion/slasher film Inside (French: À l'intérieur). She stalks the film's protagonist, Sarah Scarangelo and eventually burglarizes her home, and spends the film terrorizing her.

She was portrayed by French actress Béatrice Dalle in the original 2007 film, and by Laura Harring in its 2016 remake.

The film starts with a fetus in its mother's womb recoiling as if it was injured. It then transpires that expectant mother Sarah was in a car accident. As she is in the hospital, she is informed that there were no survivors of the crash and that her husband and the driver of the other car were both killed. Her baby is reportedly okay, and Sarah is released from the hospital.

On Christmas Eve, later that year, she sits in the park, Sarah uses her camera (she is a professional photographer) to snap photographs of a couple playing in the park, as she grieves the loss of her husband.

That night, Sarah prepares for her mother, Louise to visit her for Christmas, later that night when a woman knocks on her door, claiming that she has been in an accident and needs to use the phone.

Sarah tells the lady that she needs to use her cellphone, because her husband is asleep and that she doesn't want him to wake up. The woman (La Femme) tells her that she knows Sarah is lying, and that her husband is dead.

Sarah becomes terrified that the stranger knows her name and that her husband is dead, and asks her to leave. The woman goes around back to her house and attempts to break in, shattering the window. Sarah takes her picture with the camera and calls the police. When the police arrive, La Femme has escaped the scene, and police have no evidence, but arrange for a surveillance patrol car to stay outside her house and check on her throughout the night.

Sarah develops her photos from earlier in the day and sees La Femme standing in the background of one, meaning she has been stalking Sarah. She calls her employer, Jean-Pierre Montalban, and asks him to help her develop the photos of La Femme. Sarah lays down and dozes off, but La Femme appears above her, and presses scissors into her naval, waking Sarah up. The two engage in a brief struggle, but Sarah manages to escape and lock herself in her bathroom.

Soon, Jean-Pierre arrives and meets La Femme, who tells him that she is Sarah's mother. Montalban, who has never met Louise, takes La Femme's word and the two converse. When the real Louise arrives and goes looking for Sarah, Montalban accuses La Femme of being Sarah's stalker, and she graphically stabs him to death with the scissors. Meanwhile, Sarah accidentally kills Louise, having mistaken her for La Femme, and locks herself back into the bathroom. When she asks why she is being targeted, La Femme expresses that she wants a baby, and Sarah insults her, prompting La Femme to stab her hand to the door. La Femme waits outside the door, smokes a cigarette, and violently snaps the neck of Sarah's pet cat when it annoys her.

When the police check on Sarah, La Femme answers the door and tells them that everything is okay. The police return to the car, where they have a juvenile delinquent in custody. However, they realize that the woman who answered the door wasn't pregnant, and they return and detain La Femme. When one police go upstairs and find the dead bodies, he tells his partner to arrest La Femme and rescues Sarah. Unfortunately, La Femme, who had taken Sarah's knitting set, attacks the police officer and kills him with a knitting needle to the eye. She takes his gun and kills the other police officer with a headshot.

The other police officer hears the gunshots and forces the delinquent to come inside with him, not wanting to leave him unsupervised. Sarah directs them to the basement to turn the power back on after La Femme turns it off. La Femme appears in the darkness and attacks the final police officer by bean-bagging him at close range, then gouging his eyes out before stabbing the delinquent in the head with the scissors.

Sarah and La Femme engage in a violent confrontation, that stops when Sarah threatens to kill her own baby. La Femme bludgeons her with a toaster and begins to smoke a cigarette, allowing Sarah to burn her face with an aerosol spray can. Sarah gives herself a stoma to drain the blood out of her esophagus, allowing her to breathe, before taping it, arming herself with a knife, and going after La Femme. When Sarah is about to kill her, La Femme tells Sarah to kill her because the hospital lied to her about the survivors; she was the other driver of the car, and the crash resulted in the loss of her baby, as she was in her third trimester.

The two of them realize that someone else is in the house, and Sarah follows the noises, where she is jump scared by the graphically mutilated third officer who survived La Femme's attack. Disoriented, he hits Sarah in the stomach, believing her to be the assailant, giving the real killer time to impale him with Sarah's knife.

The blow to the stomach triggers the birth, and La Femme, desperate to save the baby, attempts to deliver it, but when it becomes stuck, the risk of it being strangled by the umbilical chord arises, so La Femme takes the scissors and performs a botched emergency C-Section, resulting in Sarah exsanguinating. 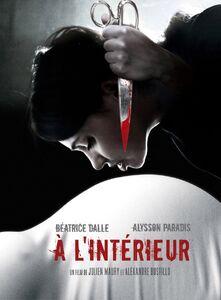 La Femme smoking a cigarette while waiting outside Sarah's bathroom. 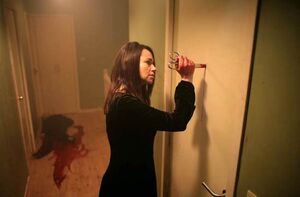 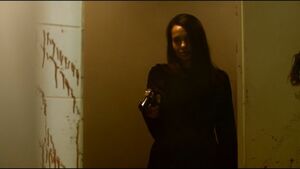 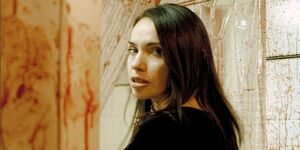 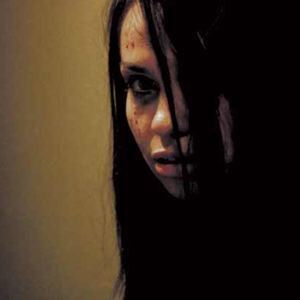 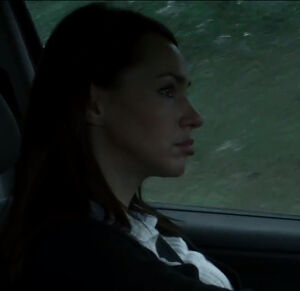 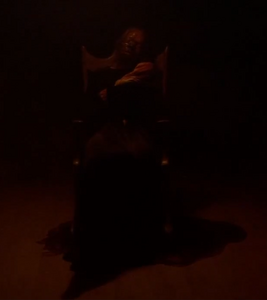 La Femme rocking the baby in the ending.
Add a photo to this gallery
Retrieved from "https://villains.fandom.com/wiki/La_Femme?oldid=3991107"
Community content is available under CC-BY-SA unless otherwise noted.