Kill anybody who stand in her way.

La Sayona is a spirit found in the Venezuelan legends, she was a woman who killed her husband and mother after she thought that they had an affair.

Once upon a time, a young woman named Melissa, lived in a small town in the plains of Venezuela and was the most beautiful girl there. She was married to a great man, caring and loving. Melissa and her husband had a baby boy. One day Melissa was swimming naked in a nearby river, when a man from the village saw her. After that the man would allow follows her and watch her bathe in the river. One day Melissa saw him and told him to leave her alone. He ignored her and instead told her a lie that he was to tell her, he was to warn her of her husband's affair with her own mother. Melissa ran home and found her husband asleep with the baby in his arms. Blind with anger, she burned the house with them inside. Villagers could hear their screams while Melissa ran to her mother's house. She found her on the patio and attacked her with a machete, striking her in the stomach. As the mother bled to death, she cursed Melissa by saying that from then on she would have to avenge all women by killing their unfaithful husbands. And from that day forward Melissa became "La Sayona".

In other versions of the tale, it appears to lone men working in the jungle when they are thinking of women they left behind in their hometown or simply when they talk to their work mates about wanting to be with a woman. Later on, a woman would appear to them in the likeness of an unknown, beautiful and desirable woman, or a loved one, and try to lure them into the forests so it could then reveal their animal-like features and devour them or just mangle them, leaving their wretched bodies for their companions to find.

In another version told in the peacock mountains, the woman would appear to men in the jungle who were lonely and willing to be unfaithful with their companion. Stories often claim that several men would take act in unveiling their selves to this ghost woman, and she would let all the men have sex with her. She would then devour their body parts, though it is most often noted that she would tear each mans genitals off with her hand or mangle them beyond use ever again, in order to punish them. Although many men in the jungle are said to have encountered La Sayona, most of them still have their genitals. It is said that she also has many strange diseases, and that she sometimes gives them to men, making their penises swollen with blisters and boils. Their wives find these boils and can assume that their husbands have had an encounter with La Sayona, effectively informing her that her husband has been unfaithful. 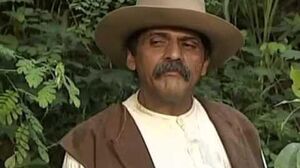