No. 8 of the Eleven Fatui Harbingers

Avenge Rostam's death at the hands of the Gods.
Seize control of Inazuma (both failed).

Rosalyne-Kruzchka Lohefalter, better known as La Signora, and also known as The Fair Lady and her previous moniker The Crimson Witch of Flames, is a major antagonist of Genshin Impact.

Despite her beauty and sophisticated nature, La Signora was in fact a member of Fatui, a malicious group of diplomats from Snezhnaya led by the Eleven Fatui Harbingers and occupies the 8th Seat inside of the organization. While a loyal member of Fatui, she was not popular among the other members and was widely disliked by most of them. Highly arrogant and sadistic, La Signora was a prideful and narcissistic witch who aims to steal other Gnoses from other gods from The Seven and other nations for unknown purposes, likely relating to the Tsaritsa's goals. In her defeat by the Traveler, she was executed by the Raiden Shogun. She was later buried by the 9 of her fellow Harbingers.

She is voiced by Yui Shouji in Japanese, who also voiced Abnes in Hyper Dimension Neptunia.

La Signora is a woman of great taste and sophistication, dressed in high-quality clothes and flaunting her looks, authority and powers to other people she consider to be mostly inferior to her; her personality is also a catalyst to why some Fatui members dislike her for her arrogant behavior. She is also power hungry when she stole Venti's powers.

Despite her arrogance, she was shown to be rather protective over her master and brutally assaulted Venti for daring to speak bad qualities about her Tsaritsa of Snezhnaya, a god he used to be friend more than 500 years ago. It is likely her insolence towards Venti (the human vessel of Barbatos the Anemo Archon) is somehow related to her lover's death due to the Cataclysm, which was said to be instigated by the Gods, which attributes to both Signora and the Tsaritsa's mutual goals of ending the "corruption of the Abyss and the ignorant gods".

In the end when she was defeated by the Traveler, she is shown to be a coward when trying to order Raiden Shogun to stay away from her as well telling the Shogun if she kill her, the entire Fatui will come and destroy Inazuma before calling the Shogun, the Traveler and Paimon as "filthy rats" only to be executed by the Shogun.

The woman who would later become La Signora originated from approximately around 500 years ago as a maiden from Mondstadt who falls in love with a member of the Knights of Favonius named Rostam. At some point, her lover Rostam would bestow her a hydro timepiece to keep track of the time she would be away studying at the Sumeru Academia.

After returning, she would later hear the news that Rostam died during the battle against the monsters spawned at the aftermath of the Cataclysm. Mourning for her lover's eventual demise, she used her life's "flame" to cleanse the world's wickedness, eventually becoming the Crimson Witch of Flames, seeking revenge against those who were responsible to Rostam's death. Rumors have said that she had abandoned her mortal form to let the fiery liquid flow through herself. Despite burning away all the monsters, the people still feared her presence.

At some point in time, Pierro, the Jester recruited her to become the 8th Harbinger of the Fatui. She was given a Cryo Delusion to abate the intense heat flowing through her and to conceal her "erased" past. She claims to have a similar goals with the Tsaritsa: to cleanse the world from ignorant Gods and the corruption of the Abyss.

La Signora is an old member of the Fatui that rules the land of Snezhnaya and serves the Tsaritsa of Snezhnaya with the best of her abilities. She makes her first appearance at the end of Act 3 of the Prologue when she was sent by her master to steal Venti's Gnosis.

After the Venti and the Traveler walk away from the Mondstadt Cathedral, La Signora accompained by her agents and mages strike the group by surprise, quickly apprehending them and taunting Venti who was too weak to be considered a "god" by Mondstadt country. While she easily defeated Venti, her agents hold back the Traveler allowing her to easily pull out Venti's Gnosis for her master. She then decides to leave before the Knights of Favonius can spot her and recognize her as a member of the malicious Fatui, knocking out both Traveler and Venti.

Weeks later, Zhongli (also known as the mortal form of Rex Lapis the Geo Archon of Liyue) was approached by Signora under the influence of Tsaritsa once said deity decided to "retire" from his duty as the guardian of Liyue and leave the land to be taken care of by the mortals. Both Signora and Zhongli formed "a contract to end all contracts" and both used Tartaglia and his Fatui division as their pawn and form an incident that would shake Liyue to the core by faking the death of their Archon. Rex is purportedly "assassinated" during the titular Rite, and his vessel - known as the Exuvia - was taken away to the Golden House by the Liyue Qixing to hide the body from potential threats like the Fatui that were the first to receive the blame. When the battle was over with the defeat of Fatui and the ancient god unleashed by Childe to destroy Liyue and lure the Geo Archon to him, Signora revealed her plan to Childe and the Traveler at the Northland Bank as Zhongli handed his own Geo Gnosis to Signora. From that point on, Childe's disdain for Signora only got worse to the point he refused to share the same boat with Signora when returning back to Snezhnaya.

In Inazuma, the Traveler discovers that Signora (and Kujou Takayuki) were behind the Fatui's involvement in the Vision Hunt Decree and their plan to distribute Delusions to the members of the Watatsumi Army. At the Tenshukaku, they discover the Raiden Shogun against Signora, angered by her punishing Kujou Sara. The Traveler takes to the Raiden Shogun's side, to which Signora reminds them that they are still a wanted criminal. They decide to call a duel before the throne of Inazuma, which Signora and the Raiden Shogun accept. Signora chooses to battle the Traveler due to her hatred of them, and transforms into her true identity as the Crimson Witch of Flame. Despite her powerful magic, the Traveler bests Signora, much to her shock. The Raiden Shogun then arrives and strikes Signora down with the Musou no Hitotachi, with Signora telling the Shogun if she kills her, the entire Fatui will come and destroy Inazuma until Signora calling her, the Traveler and Paimon "filthy rats" before disintegrating into ashes. The Traveler then takes the Funerary Mask (Signora's crown) as a trophy.

La Signora's death made a huge impact to the Fatui: some remaining members swore revenge against the Raiden Shogun while some returned back to Snezhnaya in hopes of waiting for a successor Harbinger replacing her position. Some other Fatui then used this as an opportunity to promote lower-ranking officers. After her death, the Fatui retrieved her body and the remaining Fatui Harbingers arranged her burial inside their base of operations, the Zapolyarny Palace. The Fatui's working time had been halted for half a day in mourning of her passing.

La Signora was "blessed" by Tsaritsa of Snezhnaya via her subordinate, Pierro with cryokinesis powers, and shown to create solid frozen surfaces with a single snap. Much like other Harbingers, she received the "god-like executive authority" by the Tsaritsa of Snezhnaya to rule over Snezhnaya region. As the Crimson Witch of Flames, Signora possessed pyrokinesis, capable of drawing out intense heat and fire-based abilities throughout her surroundings. 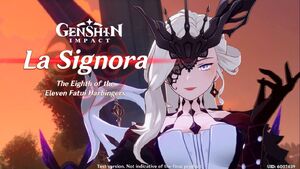 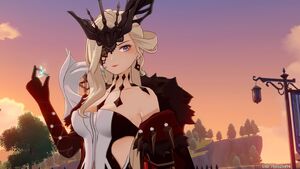 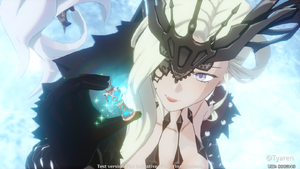 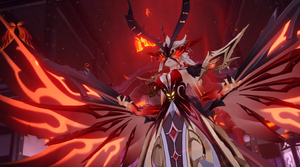 Signora as the Crimson Witch of Flame. 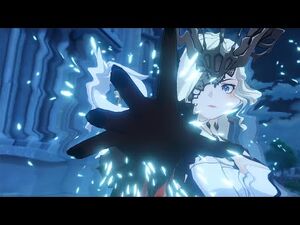 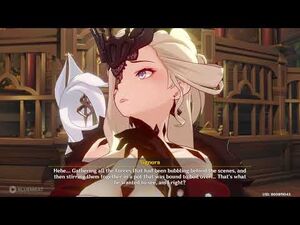 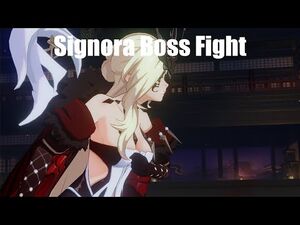