To capture the remaining humans and take over the planet.

The Seeker is the main villain of The Host. She is one of the aliens called the "Souls" who invaded the earth by possessing humans in the invasion.

The Seeker looked like all the other Souls: a silver, worm like creature. In Lacey's body, she was petite, with dark hair and dark eyes, and was always dressed in black

She was, unlike other souls, prone to irritability, anger, emotional outbursts, stubborness, and often started arguments. She is also the only soul as of yet seen to have actively/purposely been cruel and intimidating to another soul, when she tried to tell Wanderer she would be erased by Melanie's growing strength. Not having been Aable to suppress her host's personality caused these behaviors, as the Seeker was frightened of and frustrated with her own host, Lacey. This was her original motivation for becoming so obsessed with Wanderer's case; knowing that Melanie was as present to Wanderer as Lacey was to the Seeker, she had hoped observing Wanderer would help her finally silence her own host. She didn't have any remorse what so ever at later having killed Wes (as she and the other souls do not understand humanity, simply seeing them as nothing but a violent threat) and was also willing to eliminate all of the human rebels. She was also very stubborn, not giving up her hunt even when the other Seekers had given up. Her greatest fear was to die. Earth was her very first World, which explains all of her actions and behaviors as those of a very young and inexperienced soul who had not yet learned the compassion, patience, fairness, and self-control/objectivity necessary to master the 'unruly emotions' and 'vivid senses' of a human host described by the infinitely more experienced Wanderer.

The Seeker is one of the invading Souls and the main antagonist of the story. When Wanderer a.k.a. Wanda (one of her former soul comrades and a major protagonist in the story) awakes in Melanie's body (another protagonist and a human), the Seeker has been assigned to her so that she can try and locate the remnants of the Human resistance, whom she believes are prepared to fight a war against the souls.

The basis of Wanda and Melanie's relationship comes from their common hatred towards the Seeker. The Seeker follows Wanda everywhere, believing that she can help her find the humans. When Wanda disappears in the desert, she tries to convince the other Seekers that she has found the humans and that they must pursue her to destroy the resistan</span>

When they turned her down, the Seeker set off on a quest to find Wanda and the humans. After several months, while Wanda and her human friends, Jared Howe and Ian O'Shea, where on a raid, the Seeker found the human hideout. She killed Wes, one of Wanda's new friends, and was held in custody by Melanie's uncle Jeb.

Wanda confronted her when she returned and was given the right to decide her fate. Wanda revealed to Doc how to remove a soul from a human's body without killing the host. Doc and Wanda removed the Seeker and sent her away from Earth. Her host, Lacey, told the humans that she had never truly been able to control her host's spirit and that was why she had become a Seeker and been so angry and violent. 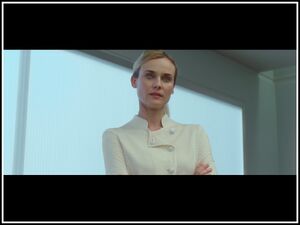 thumb|Lacey having The Seeker inside her body
Add a photo to this gallery
Retrieved from "https://villains.fandom.com/wiki/Lacey?oldid=3772867"
Community content is available under CC-BY-SA unless otherwise noted.