Villains Wiki
Register
Don't have an account?
Sign In
Advertisement
in: Tom and Jerry Villains, Anthropomorphic, Minion,
and 14 more

Prime Minister of the Cats

Serving the King of the Cats.

Stop Jerry from overthrowing the King of the Cats (failed).

Lackey is a supporting antagonist in the 2007 direct-to-video film Tom and Jerry: A Nutcracker Tale. He is a cat who serves as a prime minister to the King of the Cats.

He was voiced by Trevor Devall.

Lackey first appears when he participates in a song being sung by the cats just outside the theater about the King of the Cats.

Later, when the King and the cats are affected by the magic and take over the wintry wonderland created by it, Lackey was appointed the King of the Cats's Prime Minister. He attempted to use his position to raise his concerns about the King's treatment and enslavement of the toys, but the King refused to listen and Lackey soon gave up.

The King later spoke with Lackey and decided it would be a good idea to send someone out after Jerry to make sure he doesn't try to overthrow them. The King decided on sending out "Tim", to which Lackey tries to tell the King that his name really "Tom".

After La Petite Ballerina freed herself, Lackey came across the King sleeping and woke him up. The two realized that La Petite Ballerina had escaped and Lackey shouted at the guards to find the ballerina. Tom soon showed up and informed Lackey and the King that Jerry was coming to take back the kingdom with an army of toy soldiers. The three went out to look at the toy soldier army and the King shoved Lackey in front of him and told him to do something. Lackey then turned to Tom and told him to do something, to which Tom responded by rallying the Cat Guards to go and fend off the attacking toys.

The King and Lackey meanwhile attempted to retreat into the castle, only to find that the ballerina had freed the toys and taken it back. Lackey then fled with the other cats, but they were pursued by Jerry on a toy train. Jerry directed the train to take the cats out of the kingdom and out of the theater, causing them to land inside a garbage bin outside the building that then closed with them inside. 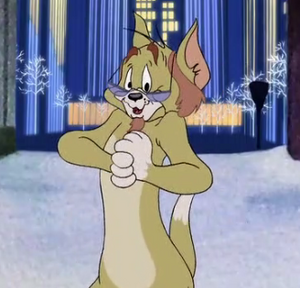 Lackey before he was transformed by the magic.