Take over the Hand (failed).

Lady Bullseye is a minor antagonist in the Marvel Comics universe who is an enemy of Daredevil. She is the female counterpart of Bullseye, hence her name.

Born in Japan, the young girl who would become Lady Bullseye was imprisoned by the Yakuza, who planned to sell her and many others into sexual slavery. However, Bullseye, on an unrelated errand, arrived to slaughter the mobsters. The sight of Bullseye effortlessly killing her captors inspired the girl to escape and become a killer.

Years later, now in the employ of the Hand, the famous ninja order, she arrives in New York, to take the lead in Hand ninja-lord Hiroshi's plan. However, she has demonstrated little tolerance for the Hand's ritual, interrupting some in order to catch her enemies, who are used to those traditions, off-guard. She kills and resurrects both White Tiger and Black Tarantula to assist her.

At the same time, it has been revealed that in her civilian guise she is a lawyer, targeting Daredevil by assisting the parents of Murdock's mentally-ill wife Milla Donovan in gaining custody of her. When one of her associates discovers this, she kills him to prevent the Hand from learning the truth. Hiroshi claims that all she has done has been according to his will. Lady Bullseye offers Daredevil the leadership of the Hand, which he refuses. The organization regroups to Spain, preparing to initiate "Plan B". There, she finds the Kingpin, trying to live a normal civilian life, and killing his new girlfriend and her kids, and brutally stabbing Kingpin, telling him that this is a message for Matt Murdock.

It turns out that Matsumoto's real goal was to take the leadership of the Hand herself, something she had been promised by Daredevil's ally Master Izo, who was revealed to have trained her. However, Izo was lying, and instead intended for Daredevil himself to take that post and reform the Hand. This occurring, Daredevil had Lady Bullseye cast out of the Hand for being untrustworthy. Angry, she vowed to kill Izo.

Subsequently, she is shown to now be allied with the Kingpin against Daredevil, instigating a conflict between Daredevil and Norman Osborn, which ultimately leads to Daredevil declaring Hell's Kitchen the territory of the Hand. 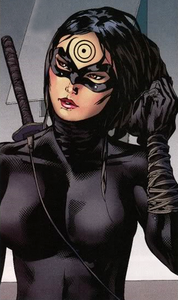