in possession of advanced technology

Gain money (succeeded) by killing the aliens on Platform One (failed).

Get revenge on Rose Tyler (failed).
Expose the Sisters of Plentitude's crimes against nature (succeeded).

Lady Cassandra O'Brien.Δ17, better known as Lady Cassandra, is a recurring antagonist in the TV series Doctor Who. She appears in the episode, "The End of the World" as the main antagonist, and in "New Earth" as an anti-villain. She claims to be the last pure human, but due to lots of surgeries, she is now only skin with a face that is stretched in a frame.

Cassandra was born in Texas and her mother was from the Arctic Desert. She lived in the Los Angeles Crevasse before moving to England. Cassandra had married at least five times and extended her life through seven hundred and eight surgeries, until she was nothing more than a sheet of skin stretched (which had to be constantly moisturized) in a frame with her brain in a jar at the frame's base. According to Cassandra, her parents were the last people to be buried on Earth

Sabotage on Platform One

In the year 5,000,000,000 (also known as 5.5/Apple/26.), Cassandra was on Platform One along with several other wealthy aliens to watch the sun destroy Earth. Upon arriving, Cassandra presented gifts, the last ostrich egg (which was actually hollow and hiding a teleporter) and an "IPod" (actually a jukebox). She later spoke to Rose Tyler about how she considered herself to be the last pure human as the other humans later mingled with other species and produced what Cassandra considered "mongrels". She also told Rose that she'd had 708 operations and would be having her 709th one which was getting her blood bleached. Unimpressed and sickened by Cassandra's lifestyle and attitude, Rose declared herself to be the last human and said that she would rather die than end up like Cassandra (whom she branded "a bitchy trampoline") before walking away.

Unbeknownst to Rose, the Adherents of the Repeated Meme (who were secretly androids controlled by Cassandra) followed her, knocked her out and placed her in a room with a descending sun filter as revenge for insulting Cassandra. Fortunately, The Ninth Doctor was able to save Rose by making the sun filter rise. Cassandra used Robot Spiders (hidden in silver balls given to other guests by the Adherents of the Repeated Meme) to sabotage the sun filter, intending take the other visitors like the Doctor, Rose, the Face of Boe and many others hostage to get ransom money for more surgery. After the spiders were stopped, Cassandra had the shields protecting Platform One from the sun turned off and teleported away, leaving the others for dead as she had shares in their companies which would triple in their deaths. The Doctor was able to stop her and teleport her back to Platform One without her assistants to moisturize her. Due to this and the high temperature, Cassandra's body dried up and she exploded.

As her brain had survived, Cassandra was revived by getting a new piece of skin from the back of her old body and having her eyes being retrieved from a bin. Twenty-three years after the Platform One incident, she resided in the basement of a hospital on New Earth ran by the Sisters of Plenitude, where she had her clone servant Chip lure Rose to her and use a psychograft to transfer her mind into Rose's body. Her original skin and brain were destroyed in the process, returning her at last to a body of pure human stock.

Cassandra was initially critical of her new appearance upon examining herself in the mirror, but she soon came to enjoy Rose's stolen form, noting her curvy physique and attractive posterior. Reading Rose's surface memories, she was shocked to learn that the man accompanying her to hospital was the Doctor, albeit with a changed face. Although she still blamed him for her earlier demise, Cassandra believed the Doctor's intellect would be crucial in helping her uncover the secrets of the Sisterhood. She decided to flaunt her newfound sexuality by adopting a more provocative appearance in the hopes of seducing him, and concealed a special perfume spray down Rose's cleavage.

Joining the Doctor in his investigation of the hospital, Cassandra used Rose's form to ambush him with a passionate kiss when her impersonation of Rose (particularly her unconvincing Cockney accent and anachronistic knowledge of advanced computer systems) aroused his suspicions. Together, the pair discovered that the hospital's remarkable success rate was down to a secret Intensive Care ward which contained thousands upon thousands of infected humans; each infected with every known disease in the galaxy and used by the Sisters as living petri dishes for developing new cures. The Doctor was outraged, and ultimately exposed Cassandra's imposture due to her perceived lack of empathy for the human test subjects. In response, she knocked him unconscious with the noxious spray hidden in Rose's bra and trapped him in one of the containment pods to be infected with diseases as a final revenge.

Cassandra then attempted to blackmail the Sisters, offering her silence on their unethical methods in exchange for a ransom. When they refused and turned violent, she had Chip open up some of the pods (including the Doctor's) as a distraction. The escaped plague-carriers then released the rest, who then began to roam free throughout the quarantined hospital, infecting and killing everyone they touched. The Doctor, Cassandra and Chip fled to the basement of the hospital, where she callously abandoned her servant after he was separated from them by the infected.

She and the Doctor then took refuge in her former quarters, where the Doctor ordered her out of Rose's body. With nowhere else to go, Cassandra possessed him instead, delighting in her new male form and taunting Rose with her feelings for him. The two of them climbed a ladder up an abandoned lift shaft to escape the carriers, but found themselves trapped at the top. The Doctor refused to open the doors with his sonic screwdriver until Cassandra left Rose's body, so she briefly inhabited one of the diseased patients before returning inside Rose.

Her brief spell inside one of the test subjects had a profound effect on Cassandra, as she sensed the desperate loneliness they'd experienced all their lives. She eventually worked together with the Doctor to devise a cure for the carriers, zip-lining down another lift shaft with him to spread the solutions through the disinfectant system. Her actions were driven primarily by survival, though in doing so she assisted in the creation of a new human subspecies she could no longer deny. After the NNYPD arrived to arrest the surviving Sisters and take the new life forms into care, Cassandra finally agreed to leave Rose's body when Chip volunteered his own to her. Unfortunately, due to being a clone, Chip only had a short lifespan and his ordeal in the hospital had weakened his heart. Realizing that she had already lived far longer than she should have, Cassandra finally accepted her death, but not before the Doctor and Rose took her (still in Chip's body) back to see her younger self, whose arms she promptly died in.

Cassandra (who was probably a tyrannical aristocrat) was very elitist and discriminatory, so she "looked down her nose" (no pun intended) at the working-class Rose Tyler, who she considered "common". She was extremely arrogant and selfish at times, claiming to be the last "pure human" and considered all others to be "mongrels" due to their intermingling with other species, despite being a pair of eyes and a mouth on a flat sheet of skin, with her brain at her life-support frame's base. She was also a very callous, sly, devious and manipulative individual, being perfectly willing to let all residents of Platform One be burned to death by the sun just to make money.

Cassandra's greatest failing was undoubtedly her complete unwillingness to accept death, despite the fact that, according to Rose, it was better to die than live like her. The Tenth Doctor was appalled by her willingness to possess bodies just to prolong her own lifespan, as it robbed the people of their own lives. Only when she discovered that Chip's body was close to death did she finally accept that it was time to die.

The Metal Spiders (also known as Robot Spiders) were used by Lady Cassandra for infiltration, observation and sabotage. They first appear in the Doctor Who episode called "The End of the World". The robot spiders were small robots with four tentacular appendages and two saucer-shaped body parts. The top part had a red eye which could emit light. Individually, they weren't very strong or dangerous, but could be formidable in large groups. Their small size, great mobility and large numbers made them highly effective as sabotage devices. The metal spiders were transported by metallic orbs, which were in turn transported by the Adherents of the Repeated Meme. Cassandra used them to destroy Platform One, destroying the systems which protected it from the Earth's destruction.

On New Earth, Cassandra used the metal spiders for surveillance both inside and outside the New New York Hospital. She used them to spy on the arrival of the Tenth Doctor and Rose Tyler on New Earth. However, Cassandra's death not long after this observatory mission led to the end of their use. Regardless, it is unknown what became of them afterwards. 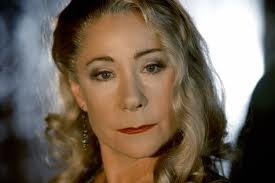 Cassandra when she was younger and still had a body. 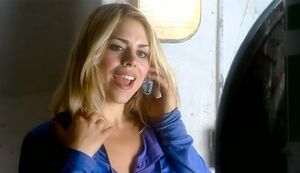 Cassandra in Rose's body talking to the Doctor on her mobile. 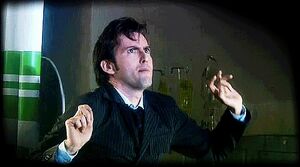 Cassandra in the Doctor's body. 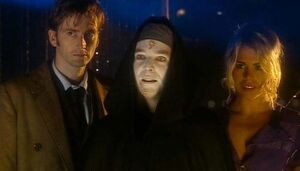 Cassandra in Chip's body with the Doctor and Rose. 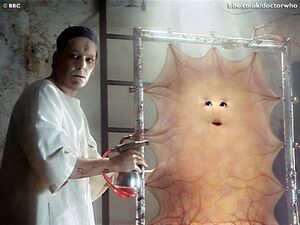 Cassandra with her servant Chip.

Cassandra as a more sexualised version of Rose