Ruler of The Endless Graveyard (formerly)

Return to Earth and kill Lucifer.

Lady Death is sometimes a protagonist, and sometimes an antagonist in Brian Pulido's Chaos! comics. She was the main antagonist of Evil Ernie series.

Lady Death originated as the sexy and violent villain that was perceived as a hallucination by the boy Ernest Fairchild. She promised to "love Ernie forever", love he never had, in exchange for his loyalty. That loyalty was to kill everyone on Earth. In the beginning, she had no real purpose or personal story except to be the eye-candy for Evil Ernie's comic book, and she was just seen as the evil sadistic woman who would always give Ernie the incentive to kill.

As the story progressed, Lady Death detached herself as the girlfriend of Evil Ernie, and began her own story. With the change, her personality changed dramatically from the sexual villain to a full blown hero.

The setting for the original Lady Death comic was medieval Sweden. The woman who would become Lady Death was born a mortal named Hope. Her father was a local nobleman named Matthias who was forcibly conscripting peasants into military service as feudal levies. The exact nature of the war that Matthias was prosecuting is not specified, although evidence from the recent revision of the character by Avatar Press suggests that it may have been one of the Northern Crusades (also known as the Baltic Crusades).

Unknown to his innocent daughter, Matthiashad a dark secret. Although congratulated by the Church for his work against the pagans, he was despised by the common folk as a cruel tyrant. Matthias was outwardly pious, but secretly dabbled in black magic and demonology. He was actually a descendant of the fallen angels who had led the rebellion against God. By contrast, Hope's mother was a woman so pure and innocent that her bloodline reached Heaven. Hope's mother died when Hope was still in her late teens, and she was left to live with her father.

Eventually, Matthias' cruelty triggered a peasant uprising. Matthias narrowly escaped death at the hands of the rebels by summoning a demon, but Hope was captured by the rebels and accused of witchcraft. Faced with the prospect of execution by burning at the stake, Hope uttered an incantation that she had overheard her father use. This incantation summoned a demon who offered her a bargain—he would rescue her from death if she would renounce her humanity and serve the powers of Hell. Hope accepted the bargain and was transported into the infernal realms.

Once in Hell, Hope became entangled in a civil war that was raging between Lucifer and an army of renegade devils led by a powerful sorcerer. Hope was devastated when she learned that the ambitious sorcerer challenging Lucifer for the control of Hell was her own father.

Gradually corrupted by the nature of her surrounding, Hope was tainted with evil. She allied herself with an exiled craftsman who forged weapons for the infernal armies. While speaking to him, she declared that the innocent woman she had once been was dead and that she would henceforth only be known as Lady Death.

In her new persona, Lady Death led an uprising against the Lords of Hell. During the final battle, Lucifer cursed her never to return to Earth while the living walked. Lady Death swore an oath that she would circumvent Lucifer's curse by exterminating all life on Earth.

Lady Death finally ended Lucifer's control over her by casting him through Heaven's Gate (a place where evil cannot go), and in doing so became the new ruler of Hell. Many of the beings living in hell believe that the ascension of Lady Death signaled the beginning of the age of judgment - the final battle between good and evil for the fate of the Earth.

Avatar Press now publishes Lady Death. Since they only have the rights to Lady Death alone (without the rest of the Chaos! Comics characters that were so intertwined with her original story), Lady Death has been given a new origin story, with notable differences to the story told at Chaos! Comics.

Hope is the daughter of Mary and Marius. Marius is a crusader who has been waging endless campaigns against the pagans, always returning with only his most loyal soldiers, while the peasant levies were slaughtered. This angered the survivors.

Hope, realising that her father has changed and is no longer the man he once was, follows him into the dungeons, with her mother close behind. The townsfolk meanwhile batter down the gates and invade the castle, intent on revenge. Hope discovers her father summoning dark wraiths, and sacrificing the souls of countless peasants in exchange for a kingdom in The Labyrinth. The wraiths refer to her father as Sagos.

Sagos grabs hold of Mary, revealing that he has possessed Marius' body, and they disappear through the portal, leaving Hope behind. Cheated of their revenge, the villagers decide to burn Hope at the stake as a witch. Not wishing to die, Hope casts the spell she overheard her father cast, and summons the wraiths herself. The wraiths agree to transport her through the portal, if she forsakes her humanity and pledges her soul to The Labyrinth. Hope passes through the portal, her skin and hair turning albino in the process (the mark of all those who willingly chose to pass through the portal), and finds herself in the Blacklands.

There she encounters Wargoth, who observes her uncontrolled and instinctive use of magic, and agrees to help her destroy Sagos and rescue her mother. He recruits the sorceress Satasha to teach Hope spellcraft. Wargoth also teaches her how to fight, but every weapon she wields melts in her hand due to her uncontrolled energy.

In the city of Asuwa, Lady Death recovers the sword Deathbringer, which was specially made for her by Satasha and The Silent One. Deathbringer is able to withstand her energies without being destroyed, and allows her to channel her magic through it.

Lady Death then bathes in the Fanghorn river, which grants knowledge of elemental magic to those who survive the experience. She uses this power to save Satasha's home city from destruction, but learns that Sagos does not plan to just conquer the Blacklands, but to wipe out all life, and that he has the means to do it. 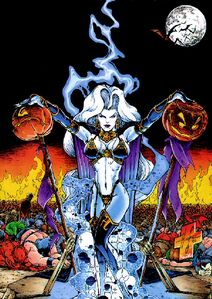 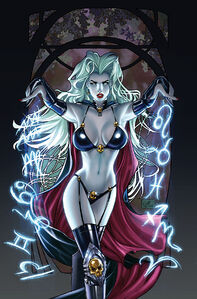