Yuriko Oyama, also known as Lady Deathstrike, is a supervillainess from Marvel Comics. She is a frequent enemy to Wolverine, the X-Men, Big Hero 6 and Daredevil.

Yuriko Oyama is the daughter of Kenji Oyama, a former Japanese kamikaze pilot during World War II whose face was horribly scarred in a failed suicide attack on an American battleship. Later Kenji ultimately scarred the faces of his three children in a ritual design.

Lady Deathstrike later went to the aid of her former associate William Stryker, who had since become a minister and led an anti-mutant crusade that resulted in his imprisonment over the murderous actions of his Purifier soldiers.

Lady Deathstrike appeared in the two-part X-Men episode "Out of the Past" voiced by Jane Luk. She had a romantic relationship and past with Wolverine. Yuriko Oyama joined the Reavers and became a cyborg in order to avenge the death of her father, Professor Oyama, who she believed was killed during Logan's rampage at the Weapon X headquarters.

Lady Deathstrike is the secondary antagonist in the 2003 film X2. She was portrayed by Kelly Hu. Lady Deathstrike is under the control of Colonel William Stryker. She and Wolverine eventually fought each other, and even though she was stronger than Wolverine, he managed to inject her with a large amount of Adamantium which kills her.

Lady Deathstrike somehow survives the Adamantium injection and returns to get her revenge on Wolverine. You fight her twice and it turns out she was the apprentice of the Silver Samurai. She kidnaps Storm and before fight begins, Storm unleashes a powerful tornado, and Wolverine and Deathstrike fight inside the Tornado. The second time, Wolverine fights her in the Silver Samurai's mansion. After she loses about 3/4 of her health, she retreats and calls forth a small army of minions. When Wolverine defeats the minions she comes back with half of her health healed. She presumably gets killed again when a huge piece of wood fall down on her, crushing her. 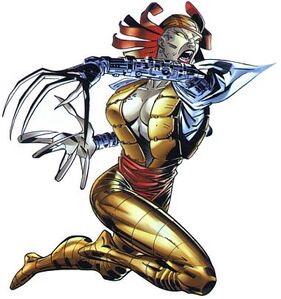 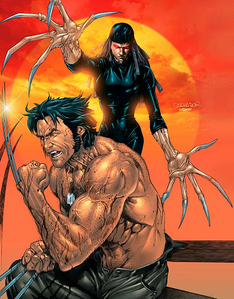 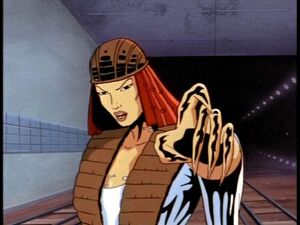 Lady Deathstrike as she appears in X-Men: The Animated Series.

Lady Deathstrike after being fatally injected with Adamantium 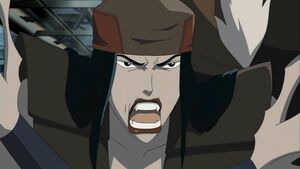 Retrieved from "https://villains.fandom.com/wiki/Lady_Deathstrike?oldid=4125334"
Community content is available under CC-BY-SA unless otherwise noted.