Yuriko Oyama, or better known as Lady Deathstrike, is the secondary antagonist in the 2003 superhero film X2: X-Men United. She is Colonel William Stryker's personal assistant and has powers similar to Wolverine.

She was portrayed by Kelly Hu, who also played China White in Arrow, D'Vorah in Mortal Kombat X, Karai from the 2012 Teenage Mutant Ninja Turtles, Miss Mirimoto in Scooby-Doo! and the Samurai Sword,

In the film, Yuriko Oyama is Colonel William Stryker's brainwashed mutant assistant. She was also involved in the same government program as Wolverine called weapon x giving her adamantium claws that extend from the tip of her fingernails, instead of from her knuckles, giving her five claws on each hand rather than Wolverine's three. On Stryker's orders, Deathstrike is surely ambushed and successfully captured both Cyclops and Professor Charles Xavier.

Although she is portrayed as a supervillainess in the film, her actual orientation and origin are unclear because she is under the effects of mind control. After a fight with Wolverine that takes place in the laboratory where Wolverine underwent his own transformation, then Wolverine disabled Deathstrike with a fluid adamantium injection, presumably killing her, but if that didn't kill her, it is likely that she died in the collapse of the dam.

Yuriko's true personality was never fully discovered as she was constantly under the effect of the mind control serum used on her by Stryker. Under the mind control serum, Yuriko's eyes were encircled with a white mark showing that she was totally under control. When the effect of the serum wore off the circles would disappear, leaving her in a confused state. Luckily, Stryker used a control collar on Yuriko which would keep her docile for a certain amount of time so that he can use the serum on her again. Under the control of the serum, Yuriko would remain totally silent and she showed no emotion at all. Even in battle, she showed almost no facial expression. The serum turned her almost into a mindless robot. 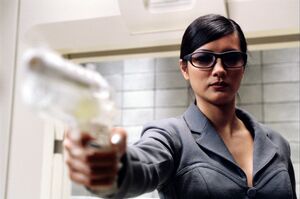 Deathstrike after being fatally injected with Adamantium. 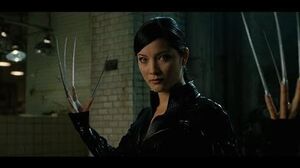