Ruler of the Bottomless Pit

A pair of swords
Magical powers

Lady Earth Flow (in Chinese: 地涌夫人), originally known as the Golden Nosed Albino Rat Spirit (in Chinese: 金鼻白毛老鼠精) or the Half-Guanyin (in Chinese: 半截觀音), is one of the major antagonists of the 16th-century Chinese classic novel Journey to the West by the late Wu Cheng'en, and its multiple adaptations. She is a demoness who desires to marry Xuanzang.

The Golden Nosed Albino Rat once stole the Fragrant Blossoms Precious Candles (in Chinese: 香花寶燭) at Vulture Peak (hence she received the name "Half-Guanyin"), and was captured by Li Jing and Nezha, but the Buddha told them to spare her life, and she was so grateful to the point of acknowledging Li Jing as her godfather and Nezha as her godbrother. After achieving a humanoid form due to learning Taoist arts for 300 years, she moved to the Bottomless Pit (in Chinese: 無底洞) at Flaming Air Mountain (in Chinese: 焰空山) and renamed herself "Lady Earth Flow", armed herself with a pair of swords.

When Xuanzang's group pass by Black Pines Forest (in Chinese: 黑松林), Lady Earth Flow disguised herself as a woman who was tied up to a tree, and fabricated a story of being kidnapped and tied up by a gang of thugs to win Xuanzang's empathy, but Sun Wukong sees through her cover. Though Xuanzang was at first convinced by Sun Wukong that she's a demoness and left her there, the Lady later managed to lure Xuanzang to rescua her and let her accompany them to a nearby temple.

During her short time in the temple, Lady Earth Flow ate six monks in three nights, and managed to capture Xuanzang, tried to force him to marry her. After numberous attempts, Wukong managed to force her to take Xuanzang out of her cave, but when Wukong, Zhu Bajie and Sha Wujing were distracted by her trick, the demoness re-captured Xuanzang once again. While sneaking into her cave again to find his master, Sun Wukong found out her two memorial tables that content the name of Li Jing and Nezha. Knowing that she is Li Jing's daughter of some sort, Wukong went to Heaven to sue Li Jing for letting the latter's daughter to cause rampage. At first, Li Jing angered of being accused, however later on, Nezha explained that this "daughter" is actually Li Jing's adoptive daughter and not a biological one, thus Wukong also found out her true identity as well. With the help of Li Jing and Nezha, Sun Wukong managed to rescue his master, while they subdued Lady Earth Flow and take her back to Heaven, where she would receive a punishment for her crimes. 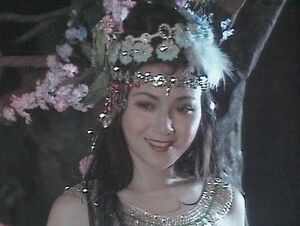 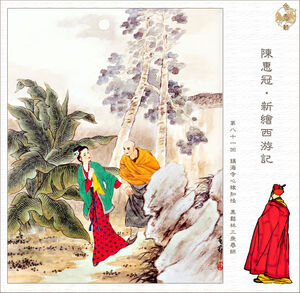 Lady Earth Flow and a monk (actually Sun Wukong in disguise) in the novel. 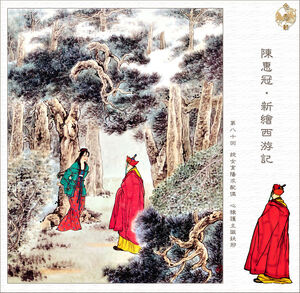 Lady Earth Flow pretends to be tied up, and Xuanzang in the novel.
Add a photo to this gallery

Retrieved from "https://villains.fandom.com/wiki/Lady_Earth_Flow?oldid=3549664"
Community content is available under CC-BY-SA unless otherwise noted.