Leader of an influential criminal cartel in Freeland

Gangs under her control
Wealth
Unspecified power over death

Make more profits and get rich.

Eliminate problems to her business.

Evelyn Stillwater Ferguson, better known as Lady Eve, is a major antagonist in the first season of the 2018 CW series Black Lightning. She is the series' adaptation of the DC comic villain of the same name.

She is portrayed by Jill Scott in her first villain role.

In her past, Eve was at some point taught by Peter Gambi, although he did not teach her everything he knew.

After Tobias Whale "killed" Black Lightning, Lady Eve gave him control over the 100 Gang as a reward. Despite being an influential crime lord, it also seems that Lady Eve has the power over life and death, allowing her to inject Whale with a serum that keeps him from aging and resurrecting dead people inside the morgue she works at.

Through a partnership with the A.S.A., Lady Eve has been tasked to distribute the drug Green Light into the streets of Freeland, which she does through Whale's 100 Gang.

Lady Eve attends a fundraiser at Garfield High School on behalf of Black Bird Funeral Parlor, which she owns. While there, she Jefferson Pierce deliberately avoids conversation with her.

After several setbacks due to the incompetence of Whale's henchman Lala, Whale and his henchwoman Syonide head out to meet with Lady Eve, whom he hands a bag full of money to make up for the money she lost due to Lala's stupidity. However, she replies that unless he wants her to throw the bag at Black Lightning, it does not really solve his problem.

Whale states that he killed Black Lightning years ago but Eve then asks him whether he is a church-going man. Whale tells her that this is not the case and Eve says that the Bible helps people stay in line and that people like Black Lightning make them believe that compliance is no longer required. She then reveals to Church that Reverend Josiah Holt is planning a protest march against the 100 Gang - which would cost them protection money - and that she has been informed by one of Holt's pastors. Church thanks her for informing her but Eve tells him that she doesn't need thanks, she needs him to deal with the problem. As Whale turns to leave, Eve remembers him that the people cannot think that they can take back the streets from them.

After the failed attack on the protest march, Lady Eve calls Tobias to Black Bird Funeral Parlor where she talks to him while cleaning and cutting up a body. Referring to Whale's skin color, Eve states that in the past people in Africa would kidnap and grind the bones of albinos because they thought they were magica. Eve compliments Tobias on the way he reinvented himself after his career loss. She reminds him that he only obtained the 100 gang due to her generosity and admits that he did a good job as their leader but also states that her partners have started to question Tobias' value since Black Lightning's return.

Whale reminds her of the millions of dollars he made her and is outraged that she is chiding him for one small mistake but Lady Eve replies that it is not just one mistake; Tobias' entire reputation is at stake because he supposedly killed Black Lightning years ago - this was why he got the 100 gang from Eve in the first place. She compares the situation to lying one resumee and states that her partners are starting to feel deceived. Tobias once again reminds her of the money he brings in and vows to kill Black Lightning again if he has to. However, Eve doubts that and also reprimands him for the blunder during the protest march in which Whale's henchman shot a reverend. She claims that the Black Lightning problem needs to be dissolved soon and Eve advises Tobias to use some of the Albino magic of his, else her partners will grind his bones into dust. When Tobias turns to leave, it is revealed that the person Eve is cutting open is actually alive.

A few nights later, Eve is visited in her morgue by her former mentor Peter Gambi. She is surprised that he managed to overcome her security but Gambi reminds her that while he taught her everything she knows, he did not teach her everything he knows. This amuses Eve and she states that Gambi should joined her after she left the agency. Gambi reminds her that according to their deal, the Pierce family is off limits.

Eve realizes that Gambi is talking about the attack on Lynn Pierce and tells Gambi that Lynn is doing dangerous research. She states that he wanted her men to steal her files and that they did not expect her to be in the building. Interested, Eve asks Gambi whether he knows anything important but he denies any knowledge. Not convinced, Eve warns Gambi that she would take out her own mother if she had to and reminds him that Gambi made promises. Gambi replies that he is aware of that and that he kept his part of the deal - he did not out Tobias Whale's survival to anybody. Eve states that this is fortunate, because if Whale's dirty secrets are revealed, she will reveal Gambi's as well.

After the two henchmen Eve sent to steal Lynn's evidence have been identified by the police, Eve sends her two personal assassins to deal with the matter, claiming that it needs a "delicate touch". After the two have gone, Eve sends a text message to Gambi, warning him that "the cleaners" are on their way. As a result, Gambi visits her in the morgue once more. While Eve is preparing a body, Gambi states that he has come because Tobias Whale is a problem. Eve replies that Whale is a very important henchman of hers and that he brings in almost 300 per cent profits. However, Gambi argues that Whale has become arrogant and selfish and that Eve cannot hold him under her leash. He also warns her that if he is caught by the cops and talks, he could endanger everything he and Eve have built over the years. Eve replies that she is aware that Whale crosses a line from time to time, but that she is not ready to give him up. She is, however, ready to give up Whale's second-in-command Joey Toledo and thinks that maybe, Tobias will get the message after Toledo is gone.

A few days later, Eve is attacked in her funeral parlor by two hitmen carrying energy weapons. While her bodyguards cover her and open fire at the attackers, one of the two bodyguards is eventually shot. Coldly, Eve uses her own bodyguard as a human shield to attack one of the hitmen. She manages to get close to him and disarms him and breaks his neck. She then uses the man's energy weapon to kill the second assailant as well. After both men are dead, Eve believes the worst to be over but suddenly, one of the coffins in her parlor opens and reveals a third hitman. Taken by surprise, Eve has no way to defend herself and is shot and killed by the hitman's energy weapon. Since Eve has been killed by electric weapons, her death is blamed on Black Lightning.

To clear his own name, Black Lightning breaks into the morgue where he finds the bodies of Lady Eve and her bodyguards. From analyzing the body, they swiftly come to the conclusion that Lady Eve and the Cleaners were killed by high-tech nuclear weaponry that shoots powerful electricity blasts. Although Black Lightning actually finds the weapons and the killers - murdered and buried in a forest - but the weapons self-destruct which destroys all evidence. 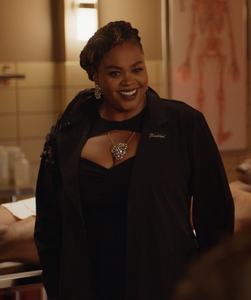 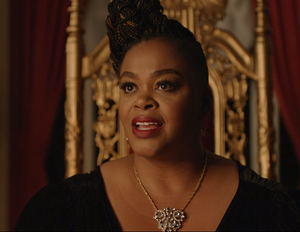 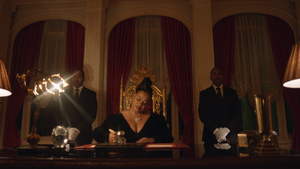 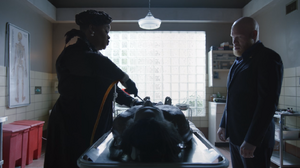 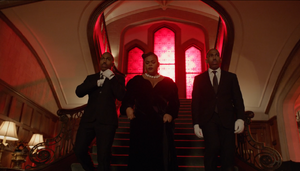 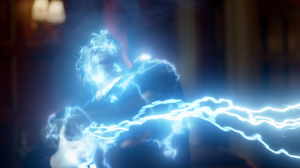