Villains Wiki
Register
Don't have an account?
Sign In
Advertisement
in: Mature, Serial Killers, In Love,
and 44 more

Heiress to the Allerdale Hall estate

Planning how to kill her victims.

Kill Edith Cushing and inherit her wealth with her brother (failed).

Lucille Sharpe is the main antagonist of the 2015 film Crimson Peak. She owns the mansion, Allerdale Hall, along with her brother, Thomas Sharpe.

She was portrayed by Jessica Chastain, who later played Vuk/Smith in the X-Men film Dark Phoenix.

Lucille and her younger brother Thomas grew up together and developed a close bond during their childhood. They were abused by their mother Lady Beatrice after she locked them in the attic and became emotionally weak due to the fact that her husband left her for another woman.

Eventually, their relationship grew into an incestuous love affair which led to Lucille killing their mother after she discovered her children's incest, and together they began plotting by killing Thomas's brides for inheritance and fortune.

Lucille is responsible for the death of Carter Cushing, an industrialist whose daughter Edith, a writer, began to see the ghosts after the death of her mother and grieving of her father's mysterious death by seeking solace with Thomas who falls in love with her by asking her to marry him. But her father became suspicious about Thomas' background and sent a private eye to investigate Thomas' alibi.

Lucille begins to grow jealous of Thomas's new found happiness with his newly married wife Edith. As a result, she began to treat her sister-in-law coldly. One night Edith is visited by her mother's ghost and warned her about Crimson Peak, becoming traumatized and weaker in the process.

She tells her husband Thomas that she wishes to leave the house but Lucille pressured her to stay. It was not long until Edith finds the decaying corpses of Thomas's brides and she realized that she will be Lucille and Thomas' next victim. One night, Edith hears noises in the manor and catches Lucille and Thomas in the middle of a passionate embrace, where its revealed that the siblings have had a long-term incestuous relationship since childhood, which eventually resulted in a sickly infant child who died shotly after birth.

Distraught, Edith leaves and Lucille follows after her, confessing of her close relationship with Thomas and then attempts to push Edith over the edge of the manor railing. Edith claims that Lucille is the other woman and not Thomas' sister as was interpreted but Lucille smiles evilly admitting she's his lover and biological sister then violently takes the Sharpe family ring off of Edith's finger and pushes her over the railing.

However, Edith's childhood friend, Dr. Alan McMichael arrived and attempted to rescue her, only to be stabbed by Lucille. Eventually, Thomas betrayed his sister by burning the wedding vows. Thomas tried to reason with her, vowing that they will leave together and they will all be together but Lucille realizes that he meant that she and him will live together as only siblings and he will be with Edith, she is distraught, reminding him of his promise to her that he would not to fall in love with someone else, only for Thomas to apologize to her and admit thought he wasn't planning on it, he has fallen in love with someone else.

After learning that Thomas had fallen in love with Edith, she has a breakdown and kills him. Distraught, she attempted to kill Edith next. However, she was disarmed by the appearance of Thomas's ghost, giving Edith the chance to kill her and break her head and neck with a shovel. But her black and decayed ghost remained in Crimson Peak, forever alone just as she lived in life. 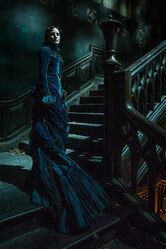 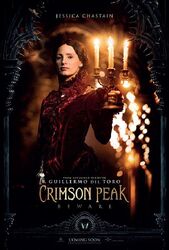