Trick and feed on victims if they reach black on her wheel.

During Universal Orlando's Halloween Horror Nights 21 event, a malicious entity called Lady Luck served as the icon. She was the personification of bad luck and drove those who were unfortunate enough to cross her into making fatal decisions. She was played by Sallie Glaner in the advertisements.

According to supplemental materials, Lady Luck has existed as long as humans have had to make a choice. This succubus preys upon those in her path and gambles, usually winning over her victims.

While she initially only presents the choices and allows those that gamble with her to choose their path in the games she plays with them, Lady Luck started pressing her victims to make the extra gamble, thus altering their fates in her favor.

Such an instance occurred in one of the events' advertisements wherein she viciously tortured an unfortunate man tied to a giant roulette wheel. She disguised herself as a beautiful yet also an ominous woman who became more and more hideous and demonic as her true form emerged and her victims made their choices.

Only one individual managed to escape her gamble with their life, a man named Floyd Mercer who later hung himself during his time as an inmate at Shadybrook Rest Home and Sanitarium (an Arkham Asylum-esque locale featured in several HHN events).

Mercer witnessed a friend gamble alongside Lady Luck and then get eaten alive by the succubus. Mercer escaped and faked insanity to seek sanctuary inside Shady Brook but was found. He elected to commit suicide rather than be killed by the monster.

Your Luck Has Run Out

Most unusual for a Halloween Horror Nights icon, Lady Luck did not have a featured house of her own. Instead, she had a designated "scare zone" (Large open spaces around the parks, filled with "scare-actors", that are themed to a certain location) called Your Luck Has Run Out. The scare zone consisted of a single urban alley where she appeared in both her beautiful and hideous forms to terrorize guests as they passed through. Also with her were chainsaw-wielding minions designed with an Ace of Spades motif.

All of the houses at the event featured backstories where Lady Luck was involved and disguised as everything from an old lady to a World War I recruitment poster. During all of these incidents, she delivered two options to her future victims, ending most of her offers with the phrase "It's your choice". 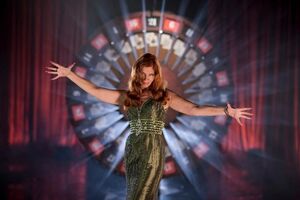 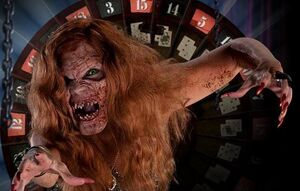 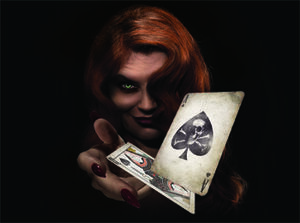 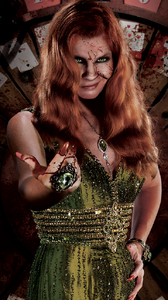 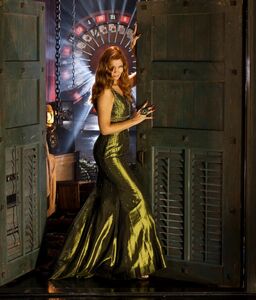