To take Earth's magic and rule the universe

Lady Lyzera is the first daughter of the House of Thraal-Nekron, Granddaughter of Sandar the Slayer, Last Blood of the People of the Ringed Moon, the wife of Varg, sister-in-law of Lexi, daughter-in-law of the Nekross King, the Queen Regent of Nekron, a member of the Nekross race and the secondary antagonist of the third series of the CBBC science fantasy series Wizards vs Aliens.

She was portrayed by Alex Childs.

Lyzera got married to Varg in order to save the Royal House of Nekron after it was revealed that Varg's father the King had taken Magic for himself and only gave the other Nekross scraps. She travels with the now King Regent Varg who wishes to have continued with the plan to extract the magic of Earth and fed his people on his father's behalf but also wants vengeance on a wizard named Tom Clarke after he turned Varg's sister Lexi into a human to save her life. Unknown to Varg, Lyzera is a Nekross Sorceress and wishes to have Magic for herself and to conquer the Universe, something only her pet bird Eelix knows.

In the episode The Key of Bones, whilst in her Sorceress Zone, Lyzera uses the drop of blood she took from Tom's grandfather Simeon Swann (which she took from him whilst disguised as a human named Laura Piper) and is able to communicate with him and is told by him about Warlock, the leader of the Wraith Lords who wish to bring Dark Magic and Chaos to the world. Simeon also tells her about a hidden talisman called The Key of Bones which can unlock and lock the Line of Twilight though Lyzera is unaware that Jathro is watching her doing magic and tells this to Varg. Later Varg brings Jathro to Lyzera saying that Jathro is making up lies about her being a sorceress to which Lyzera agrees saying that Jathro is mad. After Jathro is taken away by the guards, Lyzera tells Varg about The Key of Bones and shows him the vial containing Simeon's blood and use it to track him along with Tom and Michael in Shanghai and demand they go through a portal to take them to The Key of Bones.

The group arrives outside a castle where they meet a wizard called The Quest Master who tells them that they must play the quest in order to win The Key of Bones. During the quest, Lyzera traps Simeon, Tom, and Michael after overhearing Simeon's suggestion to dispose of her and Varg before leaving to look for The Key of Bones with Varg. However, the two find themselves trapped in an enchanted passageway but they overhear Simeon (who along Tom and Michael was freed by Ursula) calling out the names of the Wizards who made the Line of Twilight and follow them into a room with a row of small boxes inside it. The Quest Master appears and says for Lyzera and Tom to find which box contains The Key of Bones. Tom is successful in finding The Key of Bones but Lyzera destroys it before being banished from the realm along with Varg by The Quest Master but Lyzera keeps a piece of the talisman. Back on the Zarantulus, Jathro uses the piece to make a clone of The Key of Bones where Lyzera then asks him to feed Felix. But Jathro tells her that there are no more beetroo bugs left to which Lyzera kills him for betraying her earlier by turning him into beetroo bugs in front of a shocked Varg who realizes that Jathro was right all along about Lyzera being a sorceress. Lyzera then takes Varg to Her Sorceress Zone and tells him that Magic and Science will be allies in their battle against the Wizards before using the cloned Key of Bones to summon Warlock.

In Twilight Falls, Lyzera tells Varg that Magic is a strength to be embraced not just a energy to be consumed and also tells him that the Key of Bones can unlock only the Neverside but a resource of magic that spreads the entire cosmos. She also tells Varg that the planets the Nekross took magic from had its own Neverside which survive and are called the Neververse. She contracts Warlock who tells her to meet him at the Doorway of Long Shadows though secretly, Lyzera reveals to Varg that when Warlock enters through the doorway, they will take him and extract his and the other wraith lord's magic. Later Lyzera walks in on Varg revealing her plan to Tom and an Unenchanted girl named Jazz and orders the guards to seize Varg but fail to capture Tom and Jazz who escape back to Earth. Moments later, Lyzera along Varg and some guards teleport to Earth outside Blackhawk Abbey where the doorway is before sending out the guards to find Tom and Jazz. She and Varg enter the abbey and find Tom, Jazz and Randal Moon (disguised as a human) there too before using magic to make the monks there to disappear and then summons Warlock to the Dayside and gives him the Key of Bones which is his hand and reattaches it to him. Warlock after learning what Lyzera planned to do to him, uses his wraith magic to make her along with Varg fall to the ground. After Tom along with Jazz sends Warlock back through the doorway, Lyzera and Varg take them along with Randal to the Zarantulus and put them in cells and says that with Magic and Science the Nekross are victorious.

After the trio escape, Lyzera and Varg go off to the teleport to try and catch them there where they plan to suck the magic out of Tom's bones. After learning that the trio is in the Sorceress Zone, Lyzera goes there and prepares to turn Jazz into beetroo bugs for Eelix, but Tom tells her to leave Jazz alone. After being told by Eelix that Tom has one spell left, Lyzera tells him to choose between saving Jazz or the world. When Tom refuses to choose, Lyzera tells him that he is finished and so is his world. Tom then takes the magic from Lyzera's orb and uses it to take him, Jazz and Randal back to Earth to confront Warlock, destroying the orb in the process. Varg hearing the noise comes into the Sorceress Zone and finds Lyzera kneeling in the remains of her orb angrily calling out Tom.

Lyzera has violet skin with brown eyes, two antenna with an eye on the right one and a mouth on the left covered in purple strands. She wears a long purple and gold dress. 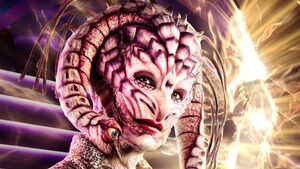 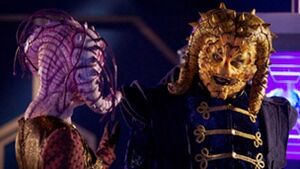 Lyzera with her husband Varg 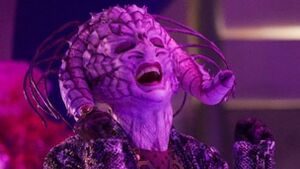 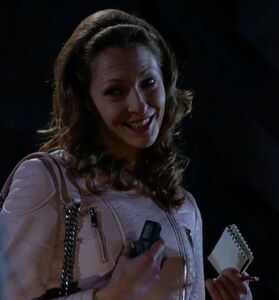 Retrieved from "https://villains.fandom.com/wiki/Lady_Lyzera?oldid=3549671"
Community content is available under CC-BY-SA unless otherwise noted.