Protect the secret of the Hunter's Nightmare.
Kill the Hunter (both failed).

Lady Maria of the Astral Clock Tower is a hunter found guarding the entrance to Fishing Hamlet and a major antagonist and boss in the Bloodborne DLC The Old Hunters.

She was voiced by Evetta Muradasilova in the English version, and by Saori Hayami in the Japanese version. Both of them also voiced the Plain Doll.

Despite being a member of Cainhurst (a high ranking one possibly), she seemed disillusioned with the hierarchy and became a hunter under Gehrman, respecting her master (and secret admirer) greatly.

The various deformed patients in the Clock Tower's seem to admire her greatly and even hold her up to a saint-like position, suggesting that she was kind to them during the experimentation. Whether or not this was sincere or if she simply feigned a kind demeanor in order to make them cooperate is unknown.

It can be assumed that at some point, she gave into the hunt and became blood-crazed, hence her presence in the Hunter's Nightmare. Despite this, she seems to retain her sanity much like Simon. It is possible that she feels remorse over the sins of her fellow hunters, thus why she protects the secret of the Nightmare.

She also seemed to have a liking for lumenflowers.

Despite being a citizen of Cainhurst, who relished in their extravagant uses of blood, she favored her Rakuyo, which required dexterity and skill rather than blood to wield effectively.

She begins the battle using her Rakuyo and a gun. When her health nears the halfway point she will plunge her blades into her chest, unlocking powerful new moves. This will not only increase her damage, but also her attack range while adding blood damage. When Lady Maria has one quarter of health left she repeats the process described above, with fire damage being added to her attacks.

The Cainhurst armor is one viable choice for fighting Lady Maria. The set's superior physical resistance hold up during the first half of the fight while the Cainhurst high blood resistance keeps it going for the second. Like the Living Failures, she does not have very high magic resistance, so the Holy Moonlight Sword's two-handed form is very effective.

Most of Maria's attacks can be avoided by dodging to her right side at the last second. Many of her moves require her to line up her attack first, giving The Hunter time to move or prepare.

Maria can be staggered and knocked down like other hunters. The Augur of Ebrietas is useful if you want to knock her down briefly.

Lady Maria was a citizen of Cainhurst and is directly related to Queen Annalise. However, she was one of the first Hunters to join the nightly hunt, studying under Gehrman, The First Hunter.

At an unknown point in time, Maria forfeited her beloved weapon, tossing it down a well when she could stomach it no longer, and disappeared mysteriously into the Hunter's Nightmare. Some believe that this had to do with the atrocities committed by the Hunters in the Fishing Hamlet. It is possible that she respected Gehrman so much that she helped defile the village and slay Kos.

Now, Maria resides in the Astral Clocktower, looking after the disfigured patients that reside there, and guarding the "secret" of the Nightmare, the entrance to the Fishing Hamlet, where the Orphan of Kos can be found. She sits in a chair, seemingly lifeless until the Hunter tries to touch her. She then fights the Hunter, hoping to kill the Hunter to prevent them from learning the secret (or at the very least, scare them away). 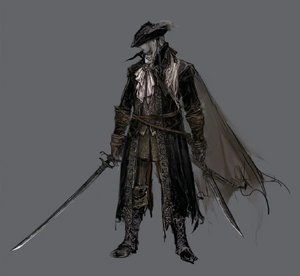 Concept art of Lady Maria.
Add a photo to this gallery 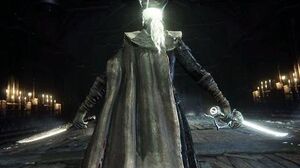 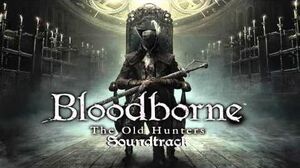 Retrieved from "https://villains.fandom.com/wiki/Lady_Maria?oldid=3790912"
Community content is available under CC-BY-SA unless otherwise noted.