To curse Princess Styla to wear an ugly jumpsuit

Lady Maud, or more commonly known as simply The Lady, is the main antagonist of the 2015 3DS game The Legend of Zelda: Tri Force Heroes. She is the witch of the Drablands and Madame Couture's older sister.

Lady Maud is the witch of Drablands, which also serves as her domain, as well as the older sister of Madame Couture. Both her and her sister are members of a tribe that crafts magical cloths. At some point, The Lady became power-hungry. Many of the Hytopia citizens loved their princess, Styla. Maud, however, hated her for her cute fashion sense. She one day sent Styla a beautifully wrapped gift. However, when Princess Styla opened the present, she was cursed to wear an ugly jumpsuit which was irremovable. Out of humiliation, the princess isolated herself, and the citizens of Hytopia began to wear regular clothes out of fear of being cursed by the witch.

In response, Hytopia's king, King Tuft, issues a request for heroes to defeat the witch as part of the Witch-Hunting Brigade, which Link is recruited to when he arrived. Throughout Drablands, the Links finds Lady Maud's material (Her glasses, collar, and parasol). Madame Couture reveals these items are used to create The Lady Ensemble, which can be used to lift the curse without having to defeat Lady Maud. She begs the Links to find all the material and save both Princess Styla, and The Lady herself.

Encounters with the Links

Lady Maud is first encounter at her lair. At first, she suspected the Links to be sent by Princess Styla to thank her for the outfit, as she thought of it as a generous gift. However, when the Links accuse her for cursing the princess, she became offended and ordered her pets to defeat the Links, but were all defeated themselves. As a result, Lady Maud throws a fit and told the Links to never be near her again before teleporting away.

She is then encounter at the Sky Temple, who is not very happy to see the Links. In rage, she declares that the temple is no place for "Unfashionable People". She then rids them of their items and engage them in battle. Despite losing their items, The Link managed to defeat her in a long battle. Realizing her defeat, The Lady surrenders and teleports away, but not before telling the Links to leave her alone.

With the last material found, the Links created The Lady Ensemble, which lifted the curse off the princess. King Tuft ensures that no serious charges will be pressed on Lady Maud. 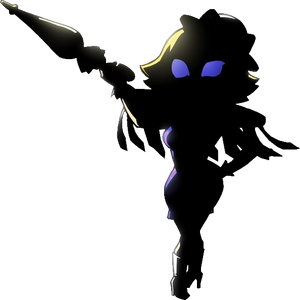 The dark artwork of Lady Maud. 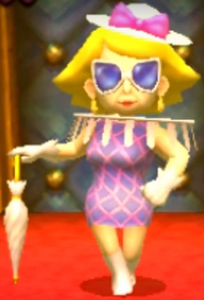