Lady Proxima is a minor antagonist from the Star Wars series. She is a Grindalid who is primarily an enemy of Han Solo. Proxima is a crime lord on the planet Corellia, her primary gang being known as the White Worms. Proxima houses and feeds young children (whom she dubs "scrumrats"), and in exchange they preform crimes for her.

She is voiced by Lina Hunt, who also voiced Gaia in God of War II.

Proxima appears to be a giant tan worm with many tiny insect-like legs running down the length of her body. She has green eyes, sharp teeth, and long white hair running down the top of her head. Her body is covered in various jewelry-related items. She appears to have a crustacean-like mass on her back.

Proxima acts more like a wicked old grouch rather than a feared crime lord. As apposed to most crime bosses, she cares somewhat about her hench people. She is quick to have them inflicted with violence for not following through with her orders, but she isn't ever seen considering punishing them with death. She even went out of her way to cooperate with a foe just so that the lives of one of her minions would be spared.

Being a crime lord, Proxima has many enemies, and she never seems to be too happy when they return to her. Their presence causes her to become enraged, and she expects them to experience some form of punishment for their wrong doings toward her. She is, however, willing to negotiate.

For the most part, Proxima relies on others to do her bidding for her. Due to her elderly state and other weaknesses, Proxima is limited to what she can do on her own. She is armed with razor-sharp teeth and she has the ability to breathe underwater. She has a large number of minions whom will preform crimes in her name in exchange for salvation.

Proxima's species has a particular weakness to light. Twice in the series has she been defeated when she was exposed to sunlight. Proxima appears to be anchored to her lair, and therefor she must rely on others. When one of her best was in threat of loosing their lives, she had no choice but to cooperate with an enemy.

In the film, Han was one of Proxima's many scrumrats. She gave him the task of retrieving Coaxium, a task which he failed. After his failure, he was brought to her lair, where she ordered one of her minions to strike him. He dodged this, so he pulled out a shooter-weapon. Han's companion Qi'ra jumped in front of him and begged them not to shoot. This is when Han picked up a rock and claimed it to be an explosive. While hesitant, Proxima caught his bluff. He then through it at the ceiling, causing the light to seep through and burn Proxima's face. She retreated into the water while her minions went after Han and Qi'ra.

Proxima is first seen while the character known as Chelli Aphra was looking for a "Path engine". At first, Proxima was not too delighted with this visit, as she had apparent quarrels with Aphra in the past. Aphra was able to make a peace offering to settle her tension.

Han returned with Chewbacca to Corellia in search of a parts for his Millennium Falcon during the "Galactic Civil War". One of Proxima's goons noticed him, and so he was taken and brought to Proxima. Proxima wished to invoke harsh punishment on Han for his past wrongdoings to her, but while they were talking, Chewbacca set off an explosive which again cracked the ceiling and burned Proxima, permanently scarring her once again.

A character known as Bazine Netal came to the planet Corellia in search of Han and his Millennium Falcon. She took one of Proxima's henchman hostage, forcing Proxima to give her the information she wanted. Proxima told Netal of the time he came in search for the ship's parts, and advised her to visit another being named Ducain on the planet Jakku. 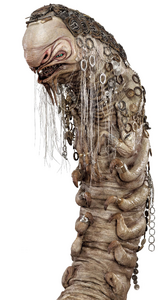 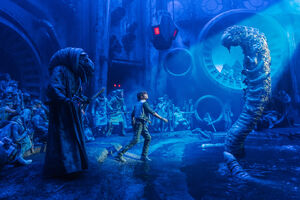 Appearing in front of Han 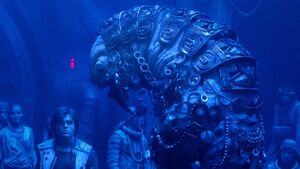 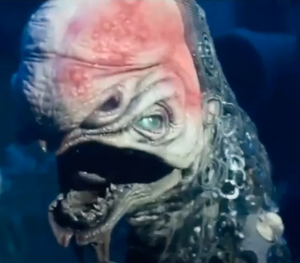 Being burnt by the sunlight 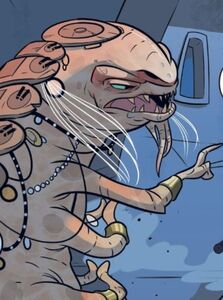 In the comic series 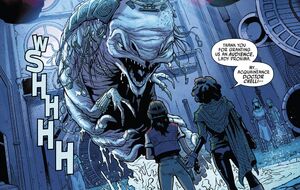