To be the manager of the copy machine shop (failed)

Lady Redundant Woman started her life as an ordinary human by the name of Beatrice Bixby. She's a copy machine employee who works at the city's copy machine shop. She's envious of the kind-hearted manager Dave, and yearns for the day that she gets rid of him, and becomes the manager of the shop. She also has an obsession with one copying machine and often calls it her baby. She then notices a strange button on the copying machine and clicks it. The result fused her and the copying machine, and this creates Lady Redundant Woman. She has the ability to create copies of herself, which she does by pressing her nose.

When she touches her nose a second time, the copy disappears. She also has the ability to copy a person by consuming a picture of that person and clicking on her nose. This ability is shown in one episode when she made a replica of WordGirl that was dubbed Evil Malicious WordGirl. And, much like her creator, she spoke redundantly. She then used the clone to steal all of the thesauruses in the city. She can also cause a copy to come to life by scanning a picture with her eyes.

However, her weakness is that the ink cartridges on her back can be removed, and this weakens her copies. The copies can also be blown away or destroyed by water, thus reverting them back into copying paper. It's also been shown that some of her copies possess their own personality.

This was shown when one of her many copies, Dupey, fell in love with the Butcher, though it didn't work out since she was a vegetarian. Whenever she's beaten, she's easily forgiven by Dave. She's also assumed to be an insomniac since she's so far the only character that has bags around her eyes.

One of Lady Redundant Woman's clone’s fantasy about The Butcher 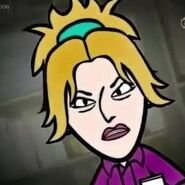