Kill anyone who was corrupt and evil

Spy on Batman to test his skills for the The Master
Kill Batman (in fact, to test him for Ra's al Ghul) (succeeded)

Lady Shiva is one of the eight assassins and a supporting antagonist in Batman: Arkham Origins. She is a highly trained and extremely dangerous assassin whose skills were known to be unmatched. She selected many of her targets simply to test her skills, but there were no known survivors.

Shiva exploited the opportunity to implement several operations throughout Gotham City that would serve as seeds for massive plans instrumental in an insidious conspiracy to wipe Gotham clean of corruption, crime, pollution, and most of its population in the years to come.

She was voiced by Kelly Hu, who also played Karai from the 2012 TMNT TV show, Cheshire from Young Justice, and Lady Deathstrike in X2.

At some point before the events of Arkham Origins, Shiva came into contact with Quincy Sharp and was able to convince him to reopen the old Gotham City mental hospital and claimed that in exchange her master could help him achieve his goals in becoming Mayor of Gotham City. With Sharp unaware, Shiva was secretly manipulating him into becoming the perfect pawn for Ra's al Ghul and Hugo Strange in their ultimate goal to eliminate any and all crime and corruption in Gotham for good.

Shiva also came into contact with one of the other assassins after Batman; Bane, who was immediately suspicious of her. Wanting to discover her true reasons for being in Gotham, Bane captured her and brought the assassin to his lair where he attempted to threaten her for information. Shiva, not fearing Bane at all, turned the tables on her captor revealing inside information on the TN-1 formula. Angry and scared his plans could be in risk, Bane demands on how she knows of this and Shiva says her master has a great deal of knowledge. Realizing who her master is, Bane demands to know what his planning, only for her to threaten and warn him to not interfere but escaping to reunite with her squadron of Ninjas.

Shiva, alongside Bane, Deadshot, Firefly, Electrocutioner, Deathstroke and Killer Croc, are hired by Black Mask (Joker) to kill Batman for $50 Million on Christmas Eve. She is seen in the video feed where she is surrounded by thugs, only to kill them all with her combat skills and then received the invitation from a cowardly mobster who then flees from her. While taking up the hunt alongside the other assassins, Shiva knowing that that her master was interested in the target, instead opts to test the masked vigilante's mantle; intending to pick up the reward as a consolation prize if he fails the test.

In order to lure Batman by using an abandoned baby carriage and a recording of a crying baby, Shiva instructs Batman to find and save an "innocent man" before he dies in the Burnley District. While Shiva used Ninjas to further test his abilities, Batman was able to save the innocent Police Officer that Shiva had captured, and then tracked down a body of a deceased police officer who Shiva killed for being corrupted.

While disappointed that Batman refused to agree that Gotham City needed to be purged instead of rehabilitated, Shiva instructed him to go to Wonder Tower in the Sheldon Park to finish the test; Batman surviving the trail and besting the Ninja, Shiva allowed her opponent to live; withdrawing herself from the hunt and said Batman is as good as Ra's claimed. Batman attempts to arrest Lady Shiva but she vanishes, with Batman knowing this isn't the last he has seen of her. Before she leaves, she hints that she is working on behalf of a higher authority.

Although Shiva doesn't appear in Arkham City, Shiva was partially responsible for the events within it as well as the prison's construction.

Shiva is a middle-aged Chinese woman with black hair swept over to one side coming down to her shoulder. She wwears a red mandarin jacket, over a black leather duster, black leggings, and high-heeled boots.

A seemingly cold, calculating, and very intelligent young woman who was willing to do anything to achieve her goals, Shiva spent most of her childhood and adult life training her body and mind to the point where she had been acknowledged as the most dangerous female martial artist in the world. The fact that both Batman and Bane were noticeably weary of her, confirmed her status as a dangerous warrior who shouldn't be underestimated under any circumstances.

Because of that, Shiva had great pride in her skills, though she was in no way arrogant enough to believe herself unstoppable. Shiva nonetheless sought to test her abilities against strong opponents and often targeted people to see how much she had improved. On each occasion, Shiva won every time, and there was no record of any known survivors suggesting that she was extremely merciless. It should be noted that most of her opponents were likely criminals.

Shiva hated criminals with a passion and believed that they couldn't be redeemed, and that the few who were were exceptions. As such, whenever Shiva encountered them, she had little to no problem with killing them. One exception to this appeared to be Bane, whom Shiva appeared to have a mutual respect for, as she warned him away from interfering with her business in Gotham City.

Despite being seen as a threat by Batman and countless others, Shiva had on occasion, shown a more human side to her as she had willingly helped him on several occasions. She was also known to take apprentices whom she had cared for greatly. Among them were Nyssa Raatko, Black Canary, and even Tim Drake who would become the future Robin.

Shiva's relationship with the League of Assassins was a complicated one. While Shiva greatly cared for her apprentice and friend, Nyssa, and agreed with most of Ra's al Ghul's opinions, she became noticeably detached from the organization over the following years and eventually she chose to defect from the League completely, as shown in Arkham City when she was not present with the League.

Despite her long list of achievements, Shiva's personal life was filled with regrets. Perhaps the biggest, was Shiva's failed relationship with fellow mercenary, David Cain, and her estrangement with her daughter, Cassandra Cain. Despite Shiva believing that Cassandra would be better off without her in her life, she eventually realized later that she had made a mistake. Since then, Shiva had become determined to try to fix her mistake. It was this reason among others, that Shiva had decided to defect from the League.

Shiva was shown to be extremely manipulative as she was able to easily trick Quincy Sharp into reopening Arkham Asylum without him ever suspecting a thing. 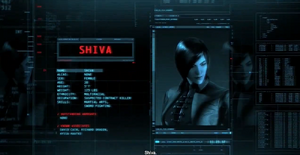 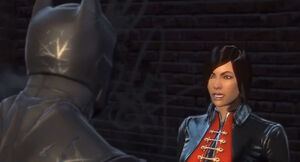 Shiva talking to Batman about her "test". 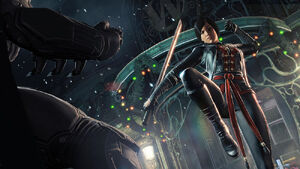 Shiva, in the Wonder Tower Lobby, ready to fight Batman with sword in hand. 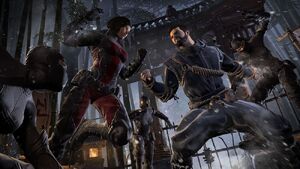 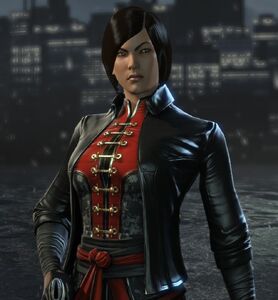 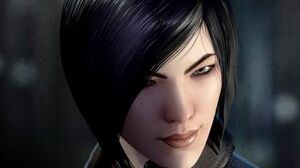