Leader of the Yakuza family

Antagonizing the Punisher and Gianni Franco.

Kill Gianni Franco and his son and take over organized crime in New York City (failed).

Lady Tanaka is a Yakuza boss and the main antagonist in the 1989 live action film, The Punisher.

She was portrayed by Kim Miyori.

Lady Tanaka is a cold, calculating psychopath with no empathy for anyone—she even slit her own brother's throat to advance her rank in the Yakuza early in her career. She thinks she is superior to everyone else, always addressing people as if they are children, and remains calm and collected even when angered. Her own adoptive daughter is a deaf-mute assassin who serves as her bodyguard.

Lady Tanaka has a bejeweled claw in place of her left pinky finger, suggesting that she failed her "big brothers" in the Yakuza at one point and was forced to sever it as penance.

Lady Tanaka grew up with her brother in Japan following World War Ii. At some point, she somehow became involved with the Yakuza and rose to a position of power. One day, her brother borrowed a amount of money from the Yakuza, but he didn't intend to pay them back (possibly thinking that his association with his sister would protect him from harm). Tanaka desired to become a Oyabun, one of the leaders of the Yakuza, but the other Oyabuns informed her that in order to do so, she would have to prove her complete loyalty to the organization. She did so by first cooking her brother a elaborate dinner, and when he was done, she killed him by cutting his throat. At one point, she adopted a mute American infant girl as her daughter, and later right hand woman. Eventually, she desired to expand her crime empire to America, setting her sights on New York City, possibly because she heard that the local Mafia had been weakened. When Gianni Franco tries to unite New York's Mafia crime families under his wing, Lady Tanaka proves (albeit bloodily) that they are still weak and disorganized, largely thanks to the Punisher's five-year killing spree. When the Mafia alliance tries to bring in a shipment of heroin in New York harbor, Tanaka's Yakuza slipped on board the ship and killed the French crew before wiping out the Mafiosi; however, the Yakuza themselves suffered heavy casualties from the Punisher who caused the van carrying the heroin to crash into the water.. She then confronts Franco and the other leaders, offering to supervise their enterprises for a 75-25% split (she, of course, getting the 75%). The American gangsters scoff at this deal, little realizing that Lady Tanaka is already taking steps to ensure their compliance: she has all the bosses' children kidnapped, and threatens to sell them into slavery. In light of this heinous news, all but Franco agree on a second meeting, where Lady Tanaka poisons the other bosses, kills the last boss with his own gun through the mouth and effectively seizes control of their territories. When the Punisher learns that Tanaka intends to sell the children anyway, he rescues all but one of them—Franco's son—at the cost of being arrested.

Later, Franco saves the Punisher from the electric chair so he will lead a raid on Lady Tanaka's headquarters and rescue Franco's son. Franco confronts Lady Tanaka as she holds a knife to his son's throat. She orders Franco to kill himself and leave all of the New York underworld in her hands; in exchange she will raise Franco's son as her own. Before Franco can do it, the Punisher buries one of his signature throwing daggers between her eyes, killing her. 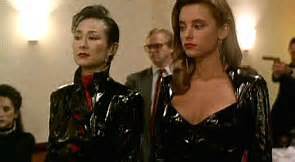 Lady Tanaka and her daughter. 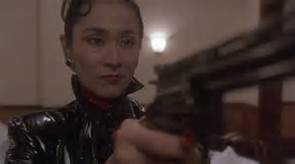 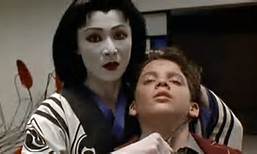 Lady Tanaka holds a hidden knife next to Tommy's neck. 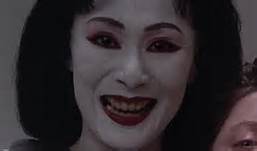 Lady Tanaka's evil grin and sadistic laugh when she nearly succeeds into making Franco kill himself moments before her death. 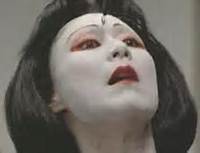 Tanaka's death from a knife in the head at hands of Frank the Punisher.