NOTE: This article is about the incarnation of Lady Tremaine from the 2015 film. The mainstream version can be found here: Lady Tremaine.

Take the Prince away from Cinderella in order that he will get married to one of her daughters and have financial security for herself and her daughters (failed).

Lady Madonna Tremaine is the main antagonist of the 2015 live action film/fantasy romance film Cinderella. She is also based off her original incarnation with the same name.

She was portrayed by Cate Blanchett, who also played Irina Spalko in Indiana Jones and the Kingdom of the Crystal Skull, Marissa Wiegler in Hanna, Penelope in Family Guy and Hela in the Marvel Cinematic Universe.

Lady Tremaine has had her share of broken dreams, which have left her cold, bitter, and delusional. She longs to have a life that is taken care of from a financial point of view and a secure future for her daughters. However, she is easily jealous of any affection her second husband bestows upon his biological daughter Ella, whom she grows to resent for her youth, innocence, and goodness.

Following the death of her second husband, the financial pressures and panic cause Lady Tremaine's jealousy to grow, and it manifested itself through cruelty and contempt directed at her stepdaughter, who is forced to become the servant of her own house. In the end, though, Lady Tremaine's jealousy, spite, and ambition get the better of her.

Described by the film's narrator to be "a woman of keen feeling and refined taste", Lady Tremaine was once married to Sir Francis Tremaine, the Master of the Mercer's Guild, with whom she had two daughters, those being Drisella and Anastasia.

According to her, her first marriage had been a love match, and she viewed her first husband as "the light of her life". When he died, her second marriage to Ella's father had been more for her daughters' sake than her own.

In the beginning, Lady Tremaine did not seem to bear any particular animosity towards her stepdaughter, and instead focused on restoring life and laughter to the estate, which appeared to have been shrouded in a sad, silent serenity after Ella's mother died. However, her methods - such as holding gambling parties to which even the nobility attended - didn't appeal to her husband and Ella, the former of whom even remarked that he didn't mind missing out on them as they were all the same. Later on, her overhearing of a private heart-to-heart conversation between her husband and Ella incited her jealousy and spite of the latter, for it seemed to confirm that her husband loved her stepdaughter more than her, and he still dearly cherished the memory of his first wife (Ella's mother).

After he departed on a business trip, Lady Tremaine started displaying, little by little, her true colors towards Ella. The first incidence was to indirectly make Ella move out of her bedroom into the attic (as a subtle excuse of which she stated it as a mere temporary measure since she was having the other rooms redecorated), and when it was obvious that her daughters were making fools of themselves to Ella, she deliberately did things to distract her while making her work like a servant (by taking subtle advantage of Ella's kind nature), such as pretending to accidentally upset a plate of biscuits, when Ella grimaced at Drisella's abysmal musical performance.

When the news of her husband's death came, Lady Tremaine was again angry, hurt, and jealous that his dying words had only been of Ella and her mother. When her daughters inquired about their lack of promised gifts, she rebuked them by stating that it didn't matter, for they were all ruined, and lamented about how they were to live.

Due to financial pressures, Lady Tremaine dismissed the entire staff of servants, and had no further qualms about being open about how she truly felt towards her stepdaughter: as described by the narrator, Ella grew to be ever misused by her step-family, who increasingly viewed her as more of a servant than a relation.

During the announcement of the royal ball, Lady Tremaine refused to allow Ella to join her and her daughters, accusing her of being ambitious and refusing Ella of buying her a new gown; even ripping apart Ella's mother's old dress alongside with her daughters, when she tried to attend anyways. While attending the ball later that night, Tremaine is as surprised as everyone else when a beautiful but mysterious princess in a blue gown appeared in the ball, let alone that she grows suspicious as Prince Kit is entranced by a mysterious girl in a blue gown. She is later informed that the Grand Duke had promised Kit's hand in marriage to the Princess Chelina of Zaragoza, causing her plan for one of her own daughters to marry Kit seemingly collapse.

Tremaine eventually realizes that the girl at the ball is Ella herself, and finds her glass slipper in the attic. She confronts Ella, and proposes that Ella marry Kit and make Tremaine the head of the royal household, ensuring that Anastasia and Drisella marry wealthy husbands. When Ella refuses to let her stepmother underestimate her will and rejecting the proposal of which Ella vowed not to have Kit and the rule of the Kingdom fall into her stepmother's hands after failing to protect her father, Tremaine destroys the glass slipper in response to the latter's defiance and locks Ella in the basement. Upon meeting with the Grand Duke, Tremaine then blackmails him into making her a countess and allowing her daughters to marry wealthy husbands, in exchange of keeping Ella hidden away from the Prince (who is now the new King upon the death of his father), to which the Grand Duke agreed to.

After Ella was discovered by the captain in the attic, Tremaine demanded that, as her mother, Ella would not be allowed to try on the glass slipper, but the captain overrules her and defends Cinderella. Ella replied that Tremaine has never been and never would be her mother. All she can do is grab on Ella's arm, sternly telling her to remember who she is. As she leaves with Kit, however, Ella tells Tremaine that she forgives her, causing a dejected Tremaine to sink to the ground in defeat. After this, the Tremaines, along with the Grand Duke were banished from the kingdom, never to return.

When she was first married to Ella's father, she was nice to Ella at first, but she was probably pretending to, just how she might have pretended to love her father to only marry him for his money. However, Lady Tremaine was later jealous towards Ella, as she may have actually loved her father, but then believed he didn't love her as much in return, as she had one time overheard him tell Ella that he cared about his daughter the most. As Ella's father left for a business trip and died, Lady Tremaine begins to reveal her jealousy and hatred towards Ella by making her do dirty work around the house and sleep in the attic. As time went by, Lady Tremaine and her daughters mistreated Ella as their servant.

Another reason why Lady Tremaine was jealous towards Ella was because of her beauty as to when she did not allow Ella to attend the ball and had her stepdaughter tear up her dress. Lady Tremaine's hatred for Ella later increased in the movie when she discovered her glass slipper and realized that she disobeyed and danced with the prince. Not wanting her to have a better life, Lady Tremaine locked up Ella as the royal guards came, refusing to let her marry the prince. At first, she believed she prevailed at hiding Ella and was satisfied that she did not allow her to wear the slipper after her daughters failed to do so. However, the royal guards soon discovered Ella upon hearing her singing voice, Lady Tremaine was forced to relinquish her. Lady Tremaine was then left heart broken as Ella tells her that she was never her mother, but offers her forgiveness, before leaving with the prince. Ever since then, Lady Tremaine and her daughters were never heard from again due to their banishment from the kingdom. 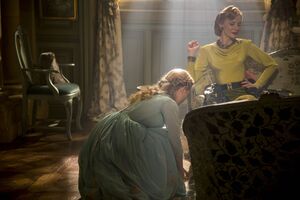 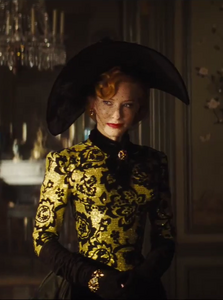 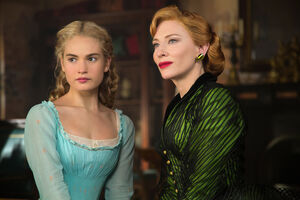 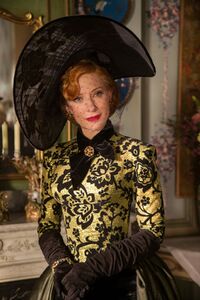 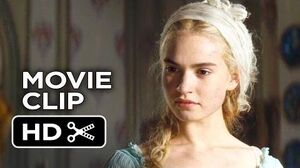 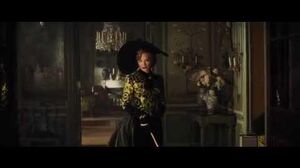 "Stepmother To Be" Clip - Disney's Cinderella