Claim both the Van Garrett and Van Tassel fortunes for herself.

Kill Ichabod Crane along with Katrina (both failed).

Lady Mary Van Tassel (formerly known as Mary Archer) is the main antagonist of the 1999 horror film Sleepy Hollow, an adaptation of the late Washington Irving's 1820 gothic story The Legend of Sleepy Hollow.

She is the second wife of Baltus Van Tassel and the stepmother of Katrina Anne Van Tassel, secretly known as an evil witch bent on gaining land rights to herself and revenge against the ones who ruined her family's lives through a string of murders by controlling the Headless Horseman.

She was portrayed by Miranda Richardson, who also voiced Mrs. Tweedy in Chicken Run.

She was born as Mary Archer, one of the two daughters of a happily married couple living in a cottage near Sleepy Hollow. When Mary was still a little girl, her father unexpectedly died for some unknown reason, and the family's landlord Sir Peter Van Garrett, evicted them and sold their home to his relatives, the Van Tassels.

One day, while gathering firewood, Mary and her sister ran into the bloodthirsty Hessian hiding from the arriving American soldiers. Despite the Hessian's order to be quiet, Mary gave him away to his pursuers by snapping a stick into two while her sister ran away in fear.

While watching the Hessian's execution and burial by the hands of the soldiers, Mary made a pact with the Devil: in return for her soul, she would be allowed her to raise the Hessian from the grave to assist her in taking revenge on the Van Garretts and Van Tassels. She vowed that she would one day make herself the mistress of everything they owned as her way of avenging what they did to her family. However, Mary's sister refused to be a part of this and broke off whatever ties she had with Mary.

18 years later, Mary came over to the Van Tassels' residence as a sick nurse for Baltus' first wife Elizabeth, whom she secretly poisoned before proceeding to enter a relationship with Baltus and becoming his second wife. Two years later, she headed over to the Tree of the Dead, where the Hessian's grave was marked at. She then dug up the grave and stole the skull herself, intending to use her dark magic to revive the Horseman under her control to kill those who wronged her.

As New York police constable Ichabod Crane (the hero of the film) arrives in Sleepy Hollow following the murders of Sir Van Garrett, his son Dirk, and the widow Emily Winship, Lady Van Tassel pretends to be supportive with him. As the investigation goes on following the murders of Jonathan Masbath and Magistrate Samuel Phillipse, Crane follows the clues through the woods to a crone witch, who gives him directions to the Tree of the Dead where the Horseman's grave is located. After seeing that the skull has been stolen and witnessing the murders of the Killian family and Brom Van Brunt, Ichabod starts to believe that a conspiracy links all the deaths together, deducing that all who either benefited from or knew about Van Garrett's new will have become victims of the Horseman (except for Brom, who was only killed in self-defense). Crane then suspects that Baltus is the person behind the murder spree since he is the only one who would have inherited the fortune, though Katrina refuses to believe that her father would do such horrible things.

One night, Crane and Masbath's son see a mysterious cloaked figure holding a lantern, disappearing into the Western Woods. As young Masbath stays behind while Crane goes to investigate, not only does he discover the cloaked figure to be Lady Van Tassel, but that she's engaged in a sexual encounter with Reverend Steenwyck, during which, she grabs a knife and violently slices the palm of her hand, allowing Reverend Steenwyck to lick her wound clean. The morning after the encounter, Lady Van Tassel notices how Crane has been so careful not to look at her hand or ask how she cut it, which would have been polite of him. She tells Crane that she knows that he had followed her into the woods and makes him promise not to tell her husband about her encounter in the woods.

Later, while Lady Van Tassel is out gathering flowers, Baltus comes to her to tell her of a gathering at the church. He then witnesses, to his horror, the Horseman coming towards Lady Van Tassel with his sword unsheathed and heads off to the church, with the townspeople filing in just as he arrives. With the men firing muskets as the Horseman circles the church, Crane realizes the Horseman can't enter the church grounds as it is hallowed ground. As a massive fight breaks out in the church, Dr. Thomas Lancaster begins to confess to his role in the conspiracy, only to be killed by Reverend Steenwyck, who is in turn shot to death by a frightened Baltus. The chaos ends only when the Horseman harpoons Baltus through a church window using a pointed church fence post attached to a rope, dragging him out and chopping off his head.

As Crane is about to leave Sleepy Hollow in disgrace, he becomes suspicious upon noticing that the hand of the supposed corpse of Lady Van Tassel has a wound that shows signs of having been caused post-mortem. Deducing that the cut was made when the woman was already dead, Crane realizes that Lady Van Tassel is the true culprit behind the murders the entire time. His suspicions are confirmed when the real Lady Van Tassel emerges alive from the dark and shocks her step-daughter Katrina into a faint. Lady Van Tassel then abducts Katrina and takes her to a windmill, where she summons the Horseman again, this time to kill Katrina to secure her hold of the entire combined Van Garrett/Van Tassel fortune for herself. As Katrina awakens, Lady Van Tassel confesses to her about her backstory and her true role behind the murder spree, also admitting that she killed Katrina's mother Elizabeth when posing as her sick-nurse. She also reveals that she had drawn the town's other four elders into her plot: instilling fear in Notary James Hardenbrook (who committed suicide before Baltus' death) and Magistrate Phillipse, blackmailing Dr. Lancaster to cover his affairs with the Van Tassels' servant Sarah (whom Lady Van Tassel killed to fake her death), and corrupting Reverend Steenwyck with his lust for her. She also confesses to having recently murdered the crone witch (who is revealed to be her estranged sister) for helping Crane and young Masbath in finding the Hessian's grave.

After confessing her crimes, Lady Van Tassel states that she now plans to have Katrina killed by the Horseman so she can get the entire fortune under her fist. Fortunately, Crane and young Masbath arrive to rescue Katrina and they head to the Western Woods to evade the arriving Horseman. Eventually, Lady Van Tassel arrives by horseback and shoots Crane while holding Katrina violently by the hair, awaiting for the Horseman to come and kill her. However, Crane (who had managed to survive the shot due Katrina's magic book intercepting it inside his coat) manages to get the stolen skull while young Masbath knocks out Lady Van Tassel with a large branch. Crane then returns the skull to the Horseman, reverting his head back to its normal form.

Finally freed from Lady Van Tassel's grasp, the Horseman spares Ichabod, Katrina, and young Masbath while reuniting with his horse Daredevil. Recognizing a recuperating Lady Van Tassel as the little girl who betrayed him to his death years ago and as the one who used him to commit the murders, the angry Horseman hoists the evil witch up on horseback and gives her a bloody kiss with his sharp teeth, much to her complete horror and agony. The Horseman and Daredevil then gallop their way back to Hell, taking a screaming Lady Van Tassel with them to make her pay for her crimes and fulfill her end of the deal with the Devil. All that ends up left of Lady Van Tassel is her sliced hand sticking out from the branches of the Tree of the Dead, indicating that she is now dead and condemned to Hell.

With the mystery behind the murders solved, Crane happily goes back to New York, taking Katrina and young Masbath with him. 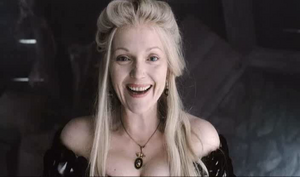 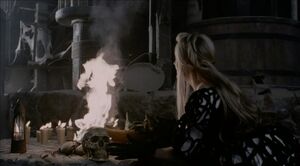 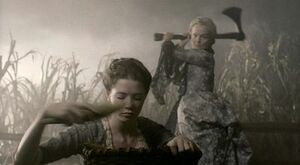 Lady Van Tassel about to kill the servant girl Sarah to fake her death. 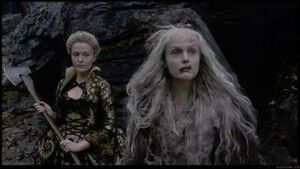 Lady Van Tassel about to kill the Crone Witch (who is also her sister). 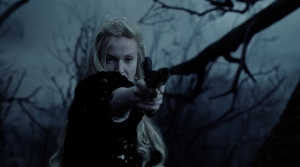 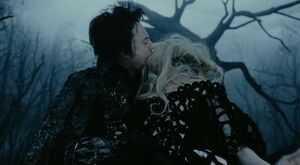 The Hessian giving a Lady Van Tassel a violent kiss, intending to make her pay for betraying him and making him commit the murders.