Heir to Zanarkand (when alive)

Messiah of the Yevon sect (in undeath)

Lady Yunalesca is the guardian of Zanarkand and a villainess in Final Fantasy X. She was the first summoner to defeat Sin long ago, as well as the daughter of Yu Yevon, after whom the Yevon religion was named, and now exists as a spirit involved in obtaining the Final Aeon for future summoners, requiring one of their guardians with whom they shared a strong, true bond to be sacrificed to become the fayth for the Final Summoning. Yunalesca actually sacrificed her own husband, Lord Zaon, in her case.

She was voiced by legendary voice actress Julia Fletcher.

Prior to the game, Lord Braska went to Zanarkand and sacrificed Tidus's father, Jecht, to be the Final Aeon, but Auron protested against this practice and went back to complain to Yunalesca, who told him that Sin is always supposed to come back, and their journey is ultimately pointless. Auron then attacked Yunalesca, but was killed by her.

When the player's party arrives at Yunalesca's temple in Zanarkand, Yunalesca is initially kind to them, welcoming them to Zanarkand and specifically congratulating Lord Braska's daughter, Yuna (who is actually named after Yunalesca), on the completion of her pilgrimage. She then gives Yuna time to discuss with her guardians whom her sacrificial fayth will be, and after some debate, Yuna decides to ask Yunalesca whether or not there is an alternate option for defeating Sin, or if Sin will come back no matter what. Upon finding out that Sin will, in fact, always come back no matter how many times it is defeated, Yuna realizes that her pilgrimage is futile, and she and the rest of the party see a vision of Auron fighting Yunalesca. Yunalesca says that the true purpose of "destroying" Sin is merely to give the people of Spira "hope" to carry on in spite of Sin's continued presence. When Yuna refuses to go through with the ritual upon hearing all of this, Yunalesca attacks the party, intending to kill them, as she believes that it is to "free" them of their Sin-caused suffering.

Lady Yunalesca at first fights in her beautiful humanoid form, but then reveals a giant Medusa monster attached to her body. After a long and difficult battle, she is defeated and destroyed, sending herself out of the land of the living, though not before dropping the name of her father, which ultimately sets in motion a chain of events that leads to the true defeat of Sin.

A now-purposeless Yunalesca returns in Final Fantasy X-2, however, as a guardian in the Via Infinito dungeon, where she takes the form of a giant basilisk called "Chac." After being defeated here, Yunalesca is finally put to rest and is sent to join Lord Zaon on the Farplane.

Yunalesca's boss form made an appearance as an Ice-elemental card in Final Fantasy Trading Card Game. 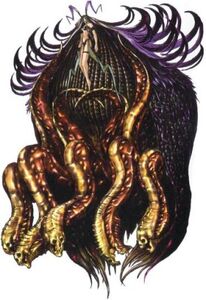 The terrifying and monstrous form of Lady Yunalesca. 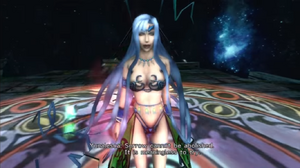 Retrieved from "https://villains.fandom.com/wiki/Lady_Yunalesca?oldid=2899222"
Community content is available under CC-BY-SA unless otherwise noted.