Hanging out at bars.

Frame Potter for his crimes.
Kill Daredevil to stop him getting in the way of his crimes.

Ladykiller (real name: Michael Reese) was a misogynistic psychopath and an enemy of Daredevil. He was a monstrous villain who hunted down women in order to beat and kill them for no reason other than a personal belief that women had to be "punished".

He favored attacking women he saw as weak but would also fly into a rage when women tried to defend themselves, judging by the style of his dress and his horrendous crimes he was also a sexual sadist.

Unlike many Marvel villains he had no superhuman abilities, but was arguably one of the darker antagonists for the reasons of being a "normal" human who engaged in horrific acts of violence for his own twisted beliefs and sadism.

Ladykiller first came to prominence at Harvard, where he attacked Becky Blake as she walked to her dorm - he knocked her down and taunted her, yet Blake fought back, pulling off his mask and revealed his true identity as Michael Reese, this prompted the madman to beat her so savagely that she was permanently paralyzed on both legs - wishing to put the events behind her Blake did not reveal Reese's identity to police when questioned, claiming she never knew the identity of her attacker.

Three years later Reese still partook in his twisted "Ladykiller" persona, preying on women in the streets of New York City - during on assault he strangled a man to the point he passed out in order to beat on his co-worker (a woman) - Daredevil heard the assault and stopped Ladykiller from murdering the woman but the monster evaded capture.

In the chaos of pursuing the Ladykiller police arrested Melvin Potter, who looked very similar to Ladykiller due to being a gladiator (and thus often wearing a mask, much as a luchador would) - so much so that when Becky Blake (who was appointed as his legal assistant) passed out upon seeing him, mistaking him for Reese.

Daredevil knew Potter was innocent and did as much as he could under his lawyer alter-ego of Matt Murdock to clear Potter's name, however Potter was brash and broke out of confinement to try and hunt down the Ladykiller himself, thankfully he was persuaded by Murdock to hand himself back to authorities to prevent further issues.

Yet the evil-minded Reese decided to try and frame Potter further, breaking into the home of Betsy Beatty (Potter's parole officer and confidante) - however Beatty managed to fend the fiend off long enough to alert neighbors and he fled. Daredevil would track Reese down to a bar, where several of Reese's allies ambushed Daredevil and held him down while the criminal savagely beat him - however Reese and his thugs were no match for the superhero, who broke free and finally defeated the monster, unmasking him.

Reese was arrested but the fact he always wore a mask in his crimes meant there was not enough evidence to convict him and it seemed he would walk free, however Murdock managed to persuade Blake to testify against Reese - likely sealing the violent brute's fate in the court of law. 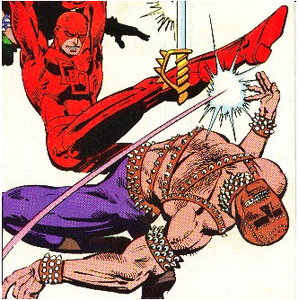