Laevatein is a minor antagonist in Fire Emblem Heroes. One of the generals of Múspell, she is Surtr's daughter and the younger sister of Laegjarn.

Laevatein is voiced by Rie Kugimiya in Japanese and Sarah Anne Williams in English.

Laevatein has long pale hair with a pinkish gradient tied in pigtails, dark skin, and red eyes. In her normal attire, she primarily dresses in dark armor and a cape with a dark blue inside that has a red to yellow gradient. In her New Years attire, she dresses in a red kimono, white socks and sandals. In her summer attire, she wears a black swimsuit and rose vines in her hair.

Laevatein's primary weapon is a large sword sharing her name. The weapons of her New Years and summer variants are a weaponized fan and surf board respectively.

Laevatein first appears under her father's command in Book II, ordered by Surtr to track down the Order of Heroes and destroy them. She makes her formal debut in Chapter 5, stating her plans and challenging them to a fight. After losing this first encounter, she retreats under her sister's recommendation. Although she later appears teaming up with her sibling, she again fails. Laevatein remarks desire to use Múspell's flames to activate Múspell's flames to try a kamikaze strike, but her sister strikes this idea down.

In Chapter 6, both sisters are successfully lured into a trap by the Order of Heroes. Laevatein at first desires to, but under her sister's command, she flees the fight instead.

Laevatein makes a final appearance in Chapter 13, where she is almost sacrificed in the Rite of Flames before her sister steps in and pays the ultimate price in her place. Facing them one last time in revenge, she also plans to sacrifice herself, but is persuaded against it due to her sibling's last wish. Following her father's demise, she takes control over his kingdom. 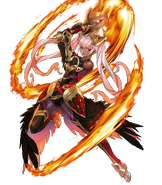 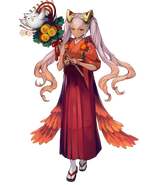 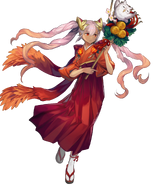 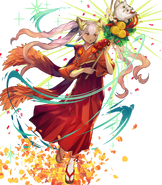 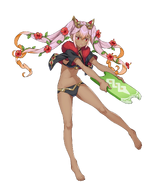 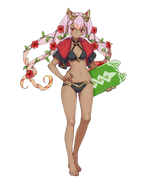 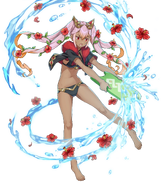 Retrieved from "https://villains.fandom.com/wiki/Laevatein?oldid=3858261"
Community content is available under CC-BY-SA unless otherwise noted.