Lord of the Seas, Lagia

The Lagiacrus is the flagship Monster of Monster Hunter 3, which it debuted from. It is a greatly feared Leviathan known as the Lord of the Seas that specializes in using specialized plates on its back to charge and electrify its enemies and prey. One particular Lagiacrus acts as the archenemy of the Moga Village Hunter and serves as a primary antagonist for much of Monster Hunter 3 and Ultimate's main campaign. Though initially appearing as the source of Moga's earthquakes, this turned out to be a false lead, as Ceadeus is ultimately revealed to be the cause of Moga's plight.

The Lagiacrus is a Leviathan known as the Lord of the Seas. It is serpentine in appearance, with gray-blue scales, orange eyes which glow when enraged, and a series of dermal spikes on its back. These plates serve the purpose of charging up the Lagiacrus, eventually to the point of glowing blue, so that it can release a burst of electricity to paralyze and kill its foes. The Lagiacrus is mainly aquatic, though it breaches the surface to cross to other bodies of water and to rest.

From the abyss' darkest cave

Comes the master of the wave

Consumer of the world entire

Devil of the sea most dire

Fear it as you fear the grave

Very little is known about the Abyssal Lagiacrus, and it takes residence in the deep where Ceadeus and Goldbeard Ceadeus are fought. 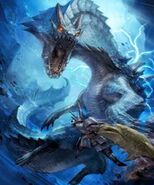 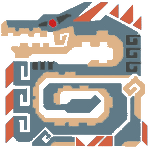 Lagiacrus is attacking hunters
Add a photo to this gallery

Retrieved from "https://villains.fandom.com/wiki/Lagiacrus?oldid=4310541"
Community content is available under CC-BY-SA unless otherwise noted.