Abducting lifeforms to experiment on.

Become the strongest being and the ultimate lifeform in the universe.

Conquer the universe.
Destroy the Flashman.

Great Emperor Lah Deus, also alternatively translated as Ra Deus, is the main antagonist of Choushinsei Flashman. He is the leader of the Reconstructive Experiment Empire Mess and sought to become the ultimate lifeform in the universe.

He was voiced by the late Unshō Ishizuka and was portrayed in-suit by suit actor Hideaki Kusaka, who also later played Emperor Zeba in Hikari Sentai Maskman and Lagorn in Kousoku Sentai Turboranger.

Lah Deus was originally a mass of genetics that was somehow brought to life. Desiring to assimilate as much genetic materials as possible in order to become the ultimate lifeform of the universe, Lah Deus founded the Reconstructive Experiment Empire Mess and traveled across the universe invading planets to gain test subjects for genetic experiments. To perform these experiments, he has recruited several Great Doctors over the eons and undergone several reconstructive operations in those years to enhance himself.

300 years before he mounted his Earth invasion, Lah Deus abducted Lie Köpflen while he was still an Earth infant and raised him to serve as the next Great Doctor of Mess to further their genetic research. To this end Lah Deus employed the Alien Hunters led by Sir Cowler to kidnap people to be experimented on by Mess. Kopflen would create several lifeforms to serve as the generals of Lah Deus' army, as well as a creature that could enlarge the monsters of Mess known as The Kuragen.

In 1966, the Alien Hunters abducted five infant children from Earth. Before they could be experimented on by Mess however, the children were rescued by the Flash race.

Lah Deus and the Mess Empire eventually return to Earth with the intention of conquering it, seeking to use its lifeforms for Mess' genetic experiments. However, Mess was opposed by the Flashmen, who were originally 5 children abducted by the Alien Hunters but rescued by the Flash race.

After the repeated failures of Keflen's creations to destroy the Flashmen, Lah Deus brought in the Alien Hunters to back up Mess' forces. Lah Deus eventually permitted to use Cowler's Alien Hunters for his experiments by this. However, infuriated by Lah Deus sacrificing his men, as well as tired of being controlled by him, Cowler began to plot against the Emperor. Around this time Lah Deus allowed Keflen to use his own genetics to create Beast Warriors, called "Deus Beast Warriors".

Seeking revenge on Lah Deus for the deaths of his men, Sir Cowler created his own Gene Synthesizer and used it to weaken Lah Deus before striking him down and seemingly killing him, leaving behind only his mask.

With Lah Deus gone, Keflen eagerly attempted to take over Mess. However, Lah Deus soon reformed from his genetics to his full form and returned to punish Köpflen for his treachery. Lah Deus revealed to Keflen his past as an Earthling and mocked him for his heritage. Angered, Keflen refused to submit to Lah Deus and used the Gene Syncronizer to reconstruct his former master into a Beast Warrior called The Deusura.

Keflen sent the Deusura to destroy the Flashmen, but Lah Deus quickly resurfaced and returned to his original form. Vowing to destroy both the Flashmen and Keflen, Lah Deus engages Flashman in an ultimate showdown. The Emperor overpowered Flashman first, but once Sara returned the team used two consecutive Rolling Vulcans and destroyed Lah Deus. Keflen then sent Kuragen to resurrect and grow The Deusura from Lah Deus. The Deseura was then destroyed by Flashman with the Flash King, leaving behind only the broken mask of Lah Deus.

However, this was not the ultimate end of Lah Deus. After being destroyed by the Flashman, Lah Deus' broken mask was taken by Köpflen in order to extract its DNA for his final creation, The Demoss, which he created by fusing the mask and DNA of Lah Deus with the body of the Kuragen, the lifeform used by Mess to enlarge their monsters. The Demoss was used by Kopflen in a final attack and was destroyed by the Flashmen, taking the Kuragen with it.

Even with The Demoss destroyed however, Lah Deus' mask was still left behind on Earth, hinting that alien overlord might someday return. 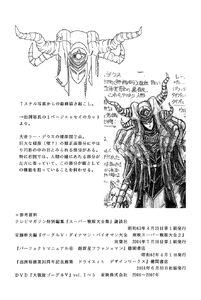 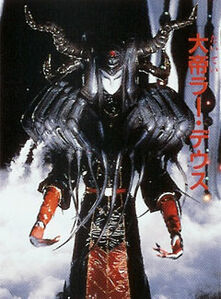 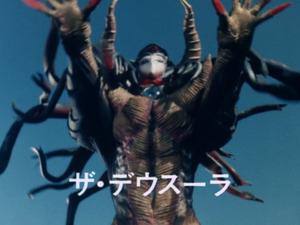 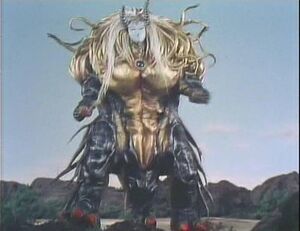 The Demoss
Add a photo to this gallery

Retrieved from "https://villains.fandom.com/wiki/Lah_Deus?oldid=4353930"
Community content is available under CC-BY-SA unless otherwise noted.