Goddess of the Present
Middle Sister of the Sisters of Fate

One of the three Sisters of Fate

Preventing Kratos from killing the Sisters and Zeus.

Lahkesis is one of the main antagonists with Zeus in God of War II. She is the middle sister of the Sisters of Fate and the Goddess of the Present.

She was voiced by Leigh-Allyn Baker.

Lahkesis is about medium height woman with angel-like wings. She wears a toga-like outfit and always carries a staff with her. Similar to Zeus her eyes are white. But the most notable thing about her is that her toga covers only a part of her torso, leaving her left breast completely revealed. However, there is a censored version, where Lahkesis is wearing a metal plate to cover her revealing breast.

When Kratos reached the Island of creation, Kratos actually made several contacts with Lahkesis. She constantly warns Kratos that he stop this journey, the result would end in death, but Kratos refused to listen and continued forward.

Lahkesis still tries to convince Kratos to stop right here and no harm will be done. But Kratos wanted to finish what he started, and so Lahkesis realized that Kratos wouldn't stop, so she decided to confront him.

Lahkesis uses her staff and shoots several green beams right at Kratos. She creates pillars made out of the green energy, and even uses the green energy to make the floor to dangerous for anyone to step on. She also uses her staff as a weapon for combat and can even throw it as a boomerang. After she's defeated for the first time, Lahkesis calls forth her older sister; Atropos, while she recuperates from the battle.

After Atropos is defeated by Kratos, Lahkesis fights Kratos for the second time, but this time, both Lahkesis and Atropos fight together to defeat Kratos. Lahkesis uses the same techniques as the previous boss battle, the only difference is that when she gets knocked out, Kratos uses her ability to slow down time and attack Atropos. When Atropos gets knocked back into the mirror, she gets stuck in the cracks. Kratos can then destroy the mirror before it can be repaired and keep Atropos from reemerging to attack. Kratos does this once, and after he does it a second time, Lahkesis guards the third mirror. After Lahkesis is weakened by Kratos, Kratos then stabs Lahkesis with her own staff. He gets grabbed by Atropos, and as Lahkesis is about to stab Kratos, but Kratos manages to slip out of Atropos' grip, as Atropos gets stabbed by her sister. Kratos then stabs Lahkesis in the head and pushes her in the third mirror. Trapped in the mirror, they can do nothing but watch while Kratos destroys it, erasing once and for all Lahkesis and her sister from existence. 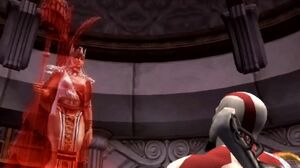 Lahkesis' bloody avatar.
Add a photo to this gallery

Retrieved from "https://villains.fandom.com/wiki/Lahkesis?oldid=3777453"
Community content is available under CC-BY-SA unless otherwise noted.