The Hegemon
The Tyrant

Deacon of the Testament of the New Ezekiel

Leader of the Scalled

Worshipping the Gospel of Knoth.

Crucify and consume Blake to cure himself of his "physical sins" (failed).

Laird Byron is a major antagonist in the 2017 survival horror video game Outlast 2. He is the delusional and ill-tempered leader of the Scalled, a group of diseased members of the Testament of the New Ezekiel who have been cast out from Temple Gate.

He was voiced by Carlo Mestroni.

Laird is a deformed, small man who is a member of the Testament of the New Ezekiel. In addition to his dwarfism, Laird at some point had to have his legs amputated which, as expected, renders him unable to walk. To counter his physical weakness, Laird is constantly seen riding atop the mindless brute Nick Tremblay. Laird even uses a saddle and has a quiver strapped to Nick's back. Laird himself carries a bow, using fire arrows against his enemies.

Laird is in control of the malformed and sick part of the Testament of the New Ezekiel, who are known as "The Scalled". Deeply loyal to Sullivan Knoth, Laird keeps the deformed part of the population in a camp outside of Temple Gate on Knoth's orders. From time to time, Knoth sends them food and other goods. He keeps a correspondence with Laird through letters.

Laird and a group of his men capture Blake Langermann after Blake escaped Temple Gate. Laird thanks God for this incident as he believes Blake to be the new messiah. To make sure, Laird forces Nick to wrench open Blake's mouth and then cuts his own hand, pouring the blood down Blake's throat. The results seem to appease Laird who declares that Blake is indeed the new messiah and that they will help him ascend. They bring Blake towards a near hill and while dragging him, Laird reveals that they plan to nail Blake to a cross, intending to having him suffer the same fate Jesus did. By then burying the corpse and eventually uncovering it and eating it, Laird and his group hope to heal their physical deformities.

However, while they are about to nail Blake to the cross, Laird gets irritated. He asks Blake why he is not delivering his gospel, as the messiah is supposed to do exactly that. He then sees Blake's camera and states that a modern messiah would not deliver his gospel by book but by camera. Happy with the result, Laird then orders Blake to be crucified. After Blake's hands have been nailed to the cross and the cross has been erected, Laird and his men leave Blake to die. When Blake rips himself free, Laird is informed eventually and he is horrified and angry at his men for letting the messiah escape. However, he then realizes that Blake will surely attempt to re-obtain his "gospel" and thus has his men walk back to the shed where Laird left Blake's camera.

Although Blake manages to get his camera before Laird can do so, Laird sees Blake leaving the hut and fires an arrow at him. The arrow misses and thus, Blake is warned that Laird is near. Blake runs off and Laird eventually loses him. Nonetheless, Laird's men remain vigilant. Eventually, Laird spots Blake again and forces him to flee once more while Laird tries to shoot him with his arrows. Blake stumbles down a slope but does not realize that a barbed wire fence is located underneath. Blake crashes into the fence and is impaled on its spikes. Laird approaches him, claiming that everything will be alright but also stating that the gospel is not done yet. He has Nick grab Blake and free him from the spikes, only to place him in a wooden coffin. While Nick buries the coffin Blake is located in, Laird claims that Blake must complete his gospel by filming his own resurrection. After covering the coffin with enough earth, Laird and Nick leave. However, Blake breaks free from the coffin almost immediately after and brushes off the thin earth layer used to bury him.

After Blake's escape, Laird's men at first believe that he has actually been resurrected. However, once Laird sees Blake, he realizes what truly happened. He fires arrows at him again, angrily ranting about how Blake's weakness prevented the deformed group from reaching paradise. Now out for revenge, Laird screams at his men once more to find Blake. When he sees that Blake is about to escape by using a rope to climb down into the woods below their enclave, he tries to stop him. But two of the members of the Scalled, betrays them possibly due to Laird's constant abuse of them, push the two out of the shed which sends the entire party plummeting into the docks, killing both Laird and Nick.

While Laird is typically devout due to being a member of the fanatical Testament of the New Ezekiel, he is considerably more foul-tempered and delusional compared to many of Sullivan's followers. He praises Knoth as one of God's prophets and remains loyal to his teachings, but his status as an outcast follower of the Testament has rendered him desperate, taking extreme measures in order to be cured of his physical sickness in order to let back into Temple Gate. As such, Laird has molded his own twisted beliefs from Sullivan Knoth's already twisted faith, preaching to the Scalled that a messiah will descend upon them, allow himself to be crucified, buried and consumed by the Scalled in order to cure them. Because of this, Laird immediately thinks that Blake is the "Scalled Messiah" and crucifies and buries him (though Blake escapes twice).

Laird has an aggressive and volatile disposition, which likely stems from both his status as a leader and from his dwarfism (possibly a form of Napoleon Complex), evident from his abusive treatment towards his followers, which ranges from Laird beating, verbally berating, and even killing them if they doubt their own faith. Because of this, he is hated by many members of the Scalled, calling Laird a "hegemon" or a "tyrant". This abusive and cruel nature directly causes Laird and Nick's own demise respectively. Despite Laird's mentally unstable nature, he generally treats his mount Nick Tremblay fairly well by feeding him salted crickets and petting him affectionately, though he still threatens to "hurt him" if he doesn't immediately obey his orders. 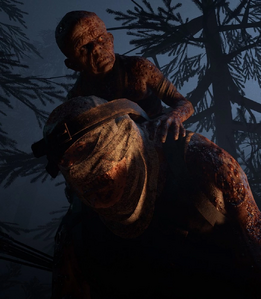 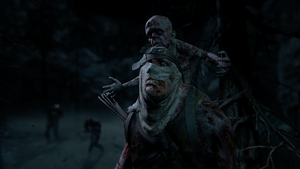 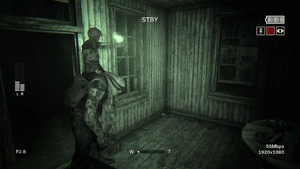 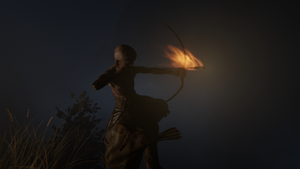 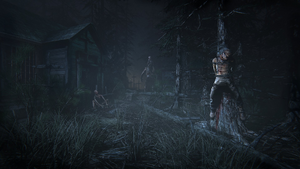 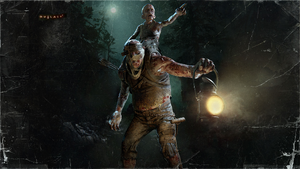 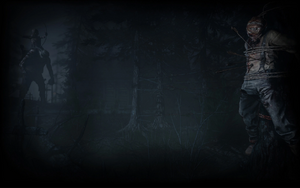 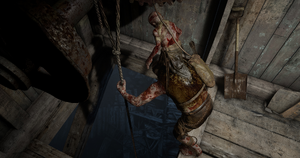 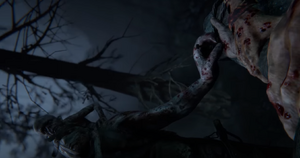 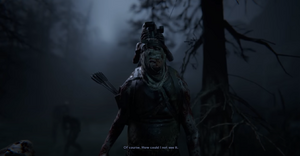 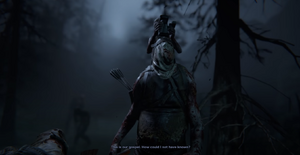 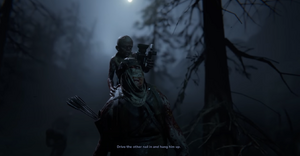 Retrieved from "https://villains.fandom.com/wiki/Laird_Byron?oldid=4154826"
Community content is available under CC-BY-SA unless otherwise noted.