Aquatic Monster of an unknown origin

Devour whomever foolish or hapless enough to enter a lake where the Lake Blob resides (succeeded).

The Lake Blob is the main antagonist of the 1987 Stephen King horror anthology film Creepshow 2, in the segment The Raft.

The novel begins with four college students named Randy, Deke, Rachel, and LaVerne decide to swim to a wooden raft on a remote Pennsylvania lake to celebrate the end of summer.

While swimming out to a raft in the middle of lake, Randy notices a mysterious oil slick-like blob floating on the surface that appears to go after the girls as they reach the raft. Deke and LaVerne dismiss Randy's suspicions that the lake blob was chasing the girls until Rachel remarks on the beautiful bands of colors on the blob's surface and touches it. The blob then instantly coats her finger and pulls her into the water, where it covers her with itself and dissolves her alive. The horrified teens are helplessly forced to watch her perish.

After the initial panic, the three remaining teenagers contemplate their next course of action. They deduce they are trapped by what is apparently some blob creature with an unknown origin, and it is waiting to devour whoever enters the water. Swimming past the entity is not an option, as it moves faster than they can swim. The group has driven eight miles off the nearest back road without having told anyone where they were going, making rescue not viable. Their only hope is to wait and see if it goes away.

The iridescent surface of the creature somehow hypnotizes and disorients them into almost falling off the raft, but they realize that it can be avoided if they look away in enough time. But the entity does not wait for teens to make next moves: after a while, the creature begins to squeeze under the raft. Deke decides he could make a swim to the shore, but as he prepares to jump into the lake the blob oozes up through two boards and grabs him by his foot. Unable to free their friend, Randy and LaVerne watch helplessly as Deke is slowly pulled through the crack by the creature and is devoured alive. LaVerne faints from the horrible sight; Randy struggles to maintain his sanity and contemplates swimming to shore while the blob is busy eating Deke, but finds he cannot do so, for he has to abandon LaVerne and abandoning her would cause LaVerne to suffer the same fate as Deke.

After LaVerne regains consciousness, Randy and LaVerne take turns watching the blob. They also take turns sitting and standing, allowing brief moments of rest for one while the other watches for when it once again goes under the raft. During the course of the night, LaVerne convinces Randy that they should sit and watch it together and keep each other warm, when LaVerne's long locks fall over the side of the raft. Before Randy can pull LaVerne up, the creature manages to tangle itself in her hair and flows over her head, dissolving and disfiguring her face. Realizing that LaVerne is beyond saving, Randy kicks her over the side of the raft in a panic, hastening her death.

As morning comes, Randy, totally isolated and alone, fantasizes about rescue, suffering from extreme fatigue. To make matters worse the blob flows under the raft every time Randy tries to sit down, forcing him to remain permanently standing. Randy finally breaks down and resigns to his fate, acknowledging the impossibility of the situation he is in.

After night comes, Randy turns to the creature and wonders that the blob's enticing colors on its surface will take the pain out of being consumed. Randy does not look away as the blob shimmers and drifts toward to claim its final victim, and the story ends.

The Raft was adapted to film as a segment of the 1987 horror anthology movie Creepshow 2, directed by Michael Gornick with a screenplay by George A. Romero. The bulk of the story is faithful to the short story with the ending altered a little: Lake Blob is an oil slick-like creature which is first seen consuming a duck as four teenagers swim towards an abandoned raft. As the blob swims towards the raft, it consumes Rachel in front of the other, horrified teens. It isn't long until Deke is also claimed by the monster as it catches him from under the raft. Randy and Laverne are the only two left on the raft. The next morning, Randy finds the oil creature catching and consuming Laverne in front of the horrified Randy, who sees his chance to escape towards the car on shore. Having made it to shore, Randy tells the Lake Blob "I beat you, whatever you are, I beat you!".

However, the creature rises up from the water like a wave and engulfs Randy. The oil creature then swims back to the lake with no evidence of the four teens ever visiting the lake except their car, which was left running the whole time. The camera then points to a "No Swimming" sign barely visible from behind some growth. 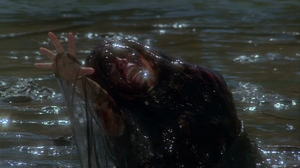 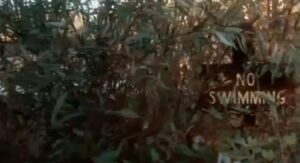 Retrieved from "https://villains.fandom.com/wiki/Lake_Blob?oldid=4085944"
Community content is available under CC-BY-SA unless otherwise noted.