Member of The Families

Become "king" of the Los Santos underworld (failed, later given up).

Prevent Stretch from going after him (succeeded in the Deathwish ending).
Help the trio.

Lamar Davis is a deuteragonist for Franklin's story in Grand Theft Auto V and a main character in Grand Theft Auto: Online. He is Franklin Clinton's best friend as well as being criminal alongside him (1988) living in Los Santos and he is also a member of The Families. He appears in Franklin Clinton's storyline. Lamar Davis is voiced by Gerald "Slink" Johnson. He is one of the two archenemies of Harold Joseph.

He is voiced by Gerald "Slink" Johnson.

Lamar is the best friend of gang banger Franklin Clinton from Chamberlain Hills. He is a member of the Families street gang as well as being a gang banger and drug dealer. Lamar was working as a repossession man for Premium Deluxe Motorsport until their boss Simeon Yetarian fired him and Franklin after Michael De Santa forced Franklin to crash through the place's window and beat him up. Lamar and Franklin both went to Davis High School when they were teenagers, eventually, the two became involved with crime.

While working for Simeon, both Lamar and Franklin stole many vehicles from their owners which were a white 9F, a red Rapid GT, a green Bagger motorcycle, and a yellow BeeJay XL SUV until Michael caused them to get fired. Lamar eventually finds an "opportunity" to kidnap a Ballas "OG" member named D for a large amount of money ($40,000). With the help of his dog Chop, they succeed in kidnapping him, but were forced to free him when Lamar inadvertently revealed their location. Later, their friend Harold "Stretch" Joseph is released from jail. Lamar celebrates by attending a drug deal at a warehouse in La Puerta. Unbeknownst to them, it was actually a trap to have Lamar and Franklin killed. When Franklin finds Ballas members arriving instead of the LSPD, Stretch retaliates by shooting D in the head, and the trio escapes the warehouse, killing Ballas members and escaping the cops along the way.

When Franklin returns to his old house where his auntie Denise lives, Lamar is there too but Franklin's unstable friend, Trevor Phillips, shows up as well, and he joins both Franklin and Lamar in a drug deal. They all go but the deal turns out to be a trap and the trio are forced to fight through large numbers of Ballas members and police to escape. Lamar eventually befriends Trevor from this point and calls him "crazy dude".

Eventually, Devin Weston gives Lamar an opportunity to make a lot of money by helping Franklin and Trevor hijack expensive luxury cars and take them to Paleto Bay. Unfortunately, Devin refuses to pay them, with Franklin calling it money for nothing at all.

Later on, it is revealed by Tanisha that Lamar has been set up by Stretch, getting him kidnapped by the Ballas at the sawmill in Blaine County. Franklin goes to rescue him with Michael and Trevor, kill the Ballas there and head back to Los Santos.

Lamar is described as crazy but a "good kind of crazy" and "very funny", and the opposite of his best friend Franklin. He is very prideful of his Apache descent and uses this to express himself and is the basis of several of his jokes. Like Franklin, he is rather affable to those who don't mess with him; however, his reckless nature results in him being overly trusting.

Lamar is seen to be lazy and tends to get himself in trouble by blindly trusting anyone offering him money, showing he is not very bright. He constantly gets himself, Franklin, and others into situations that common sense people would normally keep away from. Lamar in general is an unsuccessful criminal, all of the criminal heists he comes up with normally ends penniless and near death. Even when he does pull one of his schemes off, it's only because someone helped him, or that he actually took the time to plan ahead.

Though Lamar is a loyal friend to Franklin, where he is capable of assisting Franklin, Michael, and Trevor although Franklin warned him he will most likely die. This proves that despite his somewhat poor treatment of Franklin, Lamer is highly loyal and a great friend to have. If not for his reckless nature, he would be a decent, if inexperienced career criminal. 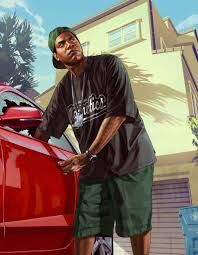 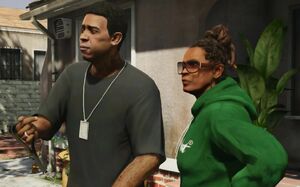 The beta version of Lamar Davis. 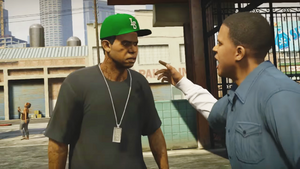 Lamar arguing with Franklin during "Repossession".