Villains Wiki
Register
Don't have an account?
Sign In
Advertisement
in: Mature, When They Cry Villains, Umineko Villains,
and 36 more
English

The Witch of Certainty
Lambda

Former Strongest Witch of The Universe

Game master of Rokkenjima game board

Any form of magic

Space-time traveling
Multiversal control (the ability to create and destruct multiple universes)
Conceptual existence (immortal, only can be harmed by a being standing on a higher plane of existence than her)
Magic of certainty (the ability to do happen whatever she wants to do)
Overwhelming willpower

To enclose Bernkastel into an eternal tie (failed).

Lady Lambdadelta, also known as The Witch of Certainty, is a supporting antagonist in Umineko: When They Cry.

She used to be known as the most powerful witch in the universe, but was defeated by Bernkastel (whom she cares for but hides her feelings) in "another game". She is also known as the Witch of the Absolute and her "magic of certainty" allows her to kill anyone with an absolute result.

Her goal is to "trap" Bernkastel by making the game between Battler Ushiromiya and Beatrice last for eternity, thus forever involving Bernkastel in the game. She has lived for a thousand years. As a witch, she embodies the concept that "hard-workers are rewarded", and is very much respected even by human beings.

She doesn't flee from the human concept of a witch; hence, the power of hers, which is respected by human beings, is immeasurable. However, she is whimsical about whose efforts she will reward and, in many situations, the person who can please her more will be able to receive her smile. Her tremendous and swiftly fierce power makes any kind of witch surrender in a moment. However, she seems to be reckless and it was thoroughly read by Bernkastel.

Lambdadelta was voiced by Fuyuka Ōura, who also voiced the younger version of Miyo Takano from Higurashi: When They Cry.

Lambdadelta appears as a young girl with short blond hair. Her eyes were amber in the original novel but were switched to red for the anime and the PS3 adaptation. In the Pachi-Slot adaptation, her eyes were changed back to amber.

She wears a pink hat and dress and wears white-and-pink-striped stockings and shoes and bows of a darker shade of pink, almost red. She also wears black long gloves. The aforementioned bows are to be found in her hair, on her hat, on her dress and on her shoes. Some of them look a little bit like candies in shape. She also wears a pumpkin on her dress and a few green leaves. You can also see a row of small white pearls on the bottom part of her dress.

She is playfully cruel. She loves Bernkastel very much, but chooses to hide it. In Twilight of the Golden Witch however, she openly expresses her love towards Bernkastel (albeit in a disturbing manner). In the Tea Party of Episode 8, it is implied that she shares a rivalry with Erika and this was further explored in her story mode with Chiester 410 in Ougon Musou Kyoku CROSS.

Standing on a higher plane of existence than humans and most witches, Lambdadelta doesn't have a great concept of them. That is why she uses them as mere pieces to play "games" against Bernkastel. From this viewpoint, she isn't particularly evil or wicked, just disregarding for human life which she considers ultimately unworthy.

This is the first game where Lambdadelta becomes a main part of the story outside of the Witches Tea Parties. In this game, she took over as the Game Master of Beato's gameboard and plays against Bernkastel. After playing out the game and eventually, in the end, getting Battler involved her and Bernkastel lead the court of Natsuhi's Trial. After Erika's victory and Battler's revival, she declared Battler the Golden Witch and Endless Sorcerer and supported him in his battle against Erika because of its pure entertainment. With Battler's revival to Endless Sorcerer and as the Territory Lord she gives the game board over to him, thus ending her small time as Game Master. 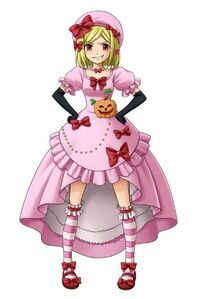 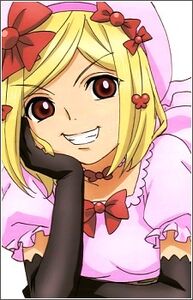 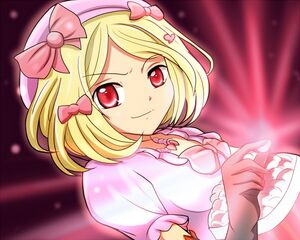 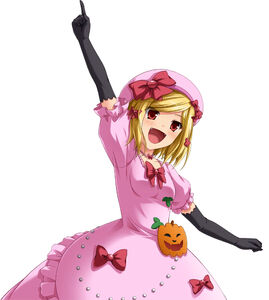