Villains Wiki
Register
Don't have an account?
Sign In
Advertisement
in: Mature, Demon, Collector of Souls,
and 35 more

Lamia (Drag Me to Hell)

The Most Feared of All Demons

Drag Me to Hell

Tormenting its victims and toying with them.

Attacking anyone that stands in its way.
Collecting souls.
Taking cursed victims to Hell.

The Lamia is the main antagonist of the 2009 satirical horror film Drag Me To Hell. It is a powerful demon that torments its victims for three days before ultimately manifesting and literally dragging them into Hell: the demon does so as part of a curse placed on Christine Brown by Sylvia Ganush and is almost unstoppable once it has been unleashed. The Lamia is described as "the most feared of all Demons".

The Lamia is an ancient and powerful demon that can be called upon by evil sorcerers or witches, as well as Gypsies who seek revenge on people who have wronged them - once the curse is activated, the Lamia will haunt the victim for three days and nights before it ultimately opens a portal to Hell and drags them into the fiery pit of lost souls to suffer an endless torment at the hands of the evil dead.

It was voiced by Art Kimbro.

In 1969, the Lamia pursued a young boy known as Juan whose desperate parents took him to the mansion of a powerful Mexican American medium known as Shaun san Dena in hopes she could perform an exorcism and save his soul, in the process they admit he had stolen a silver necklace from the back of a Gypsy wagon and despite them attempting to give it back, the Gypsies refused. Shaun San Dena tried to stop the Lamia but was overpowered as the demon attacked her and the guests, Juan fled in a panic and fell off the balcony to the floor below which soon splintered apart as a portal to Hell opened up and the Lamia dragged the boy screaming to the netherworld, prompting a horrified Shaun to swear that some day she and the Lamia would meet again.

The Lamia would return in the modern age when a young woman named Christine Brown incurred the wrath of an old Gypsy homemaker known as Sylvia Ganush - who cursed one of the buttons of her coat with the Lamia curse, which resulted in the demonic spirit targeting Christine as its next victim, and Ganush accused Christie of shaming her.

Inside of the garage, Ganush brutally attacks Christine inside of her vehicle. After a while, Ganush ends up ripping Christie's button from her coat, and manages to curse it, giving it to Christine. Because of the tragic event, she with her boyfriend Clay ended up talking to a fortune speaker known as Rham Jas, that told Christine that she is being haunted by a evil force. This escalates in Christine being attacked by the entity, multiple hallucinations occur, she even bled from her nose.

Sylvia later died before Christine could find her, making reversing the curse near-to-impossible. Christine went to Mrs. Ganush's former house to make peace with her in order to get rid of the curse, only to find herself at the old Gypsy woman's funeral as it were already too late. Sylvia's granddaughter, Ilenka Ganush, says to Christine that she had it coming now that the curse is on her head.

Later, after the recent death of local medium Shaun San Dena who tried to help her remove the curse in a séance but failed, Christine attempted to reverse the curse herself by digging up Sylvia Ganush's grave, and shoving the accursed button into her mouth after first making it a formal gift to her which, according to an old, traditional Gypsy custom as unexplained by seer Rham Jas, is to bestow Gypsy blessings upon the deceased by their loved ones to curry favor the departed's soul for truly the soul never dies.

Unfortunately, Christine had used the wrong envelope, and at the end of the film, the right envelop was given to her by accident by her boyfriend. The curse reactivated and was fulfilled, as Christine was being dragged, screaming, into Hell to burn for all eternity.

The Lamia is an intensely violent, sadistic, perverted, aggressive and duplicitous monster that takes delight in its gruesome task of hunting down souls and taking them to Hell - it does so for no apparent reason other than malice and for this reason can be considered to have a "Satanic" personality.

The Lamia's cruelty is showcased during the scene when it possesses several people during Shaun's seance - taunting Christine and telling her that she can never appease it, as far as the Lamia is considered, Christine is going to Hell... in the end the Lamia makes good on this threat.

The Lamia is an extremely powerful supernatural entity capable of even altering reality as well as casting horrific illusions and as a demon, can possess animals and people at will, it can track down its victim using a personal item that has been cursed and will torment them endlessly for 3 days before ultimately punching a hole through to our world and literally dragging them to Hell, where they will endure endless agony.

It was capable of animating its own shadow physically, and also altering electronic devices - it reduced the battery charge of a mobile phone from 100% straight down to zero, before projecting its own face across the screen. The Lamia could also telekinetically lock/unlock locks and doors at will. It was also capable of other unknown powers. 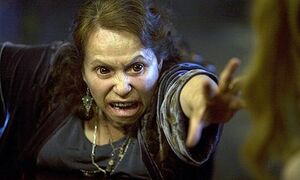 The Lamia while possessing the medium Shaun San Dena, attempting to finally take Christine into Hell. 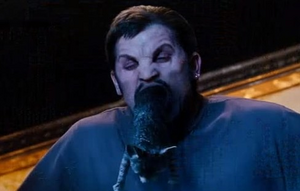 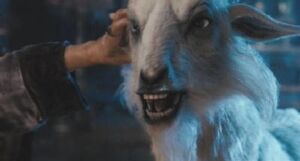 The Lamia was tricked by Christine into ritualistically leaving Shaun San Dena's body and transferred into a goat.