Spending time with her husband Grifforzer.

Lamie is one of the villains of Kyōryū Sentai Zyuranger. Her membership to Bandora's group was a secret even to other minions of Bandora: only Bandora and Grifforzer knew Lamie's existence. She is Grifforzer's wife and the only member of Bandora's group who evaded capture 170 years ago due to her assigned to a different task involving of tracking down dinosaurs' eggs that spilled out to the sea. She was called by Bandora to aid Grifforzer in her plans to take out Daizyujin during a solar eclipse. In the series finale, Lamie was pregnant with Grifforzer's child, giving birth after being trapped in an urn with the rest of Bandora's group. At the time of Zyurangers was on air it was considered rare to see an evil female executive who is a married woman.

She is portrayed by Ami Kawai, who also both portrayed and voiced a monster called Amikiri in Kakuranger series later on.

Shortly after the awakening of Burai, Bandora sensed Lamie's presence on Earth and began calling out to her, offering to grant Grifforzer the ability to talk if she joined up with them. Emerging from deep within the Dark Forest and still locked within her boulder, Lamie attacked the Zyurangers as they met with two brothers who had found the Dinosaur eggs that had been lost during their fight with Dora Cockatrice on Delos island. Upon emerging from the boulder, Lamie was joined by Grifforzer and while they failed to retrieve the eggs, instead they managed to kidnap the elder of the two brothers who Bandora later ransomed for the eggs with the promise that Daizyujin would be destroyed in three days time. True to her word, Bandora granted Grifforzer the ability to speak and his first words (much to Lamie's outrage) were, "Women don't belong on the battlefield. Go home and do some laundry or something." Regardless of her husband's disapproval, Lamie participated in the following battle anyway and, after transforming into Lamie-Scorpion, worked with both Grifforzer and an enlarged Dragon Ranger to hurl a power deprived Daizyujin into a volcanic fissure. Later, after Burai was awarded the Zyusouken and summoned Dragon Ceasar, Lamie and Grifforzer engaged the rampaging mech in battle but were forced to retreat when the Guardian Beasts suddenly returned.

When the Zyurangers were dealing with Dora Silkis, Lamie found a rival in Mei in the art of disguises. Lamie gives birth to her and Grifforzer's son at the end of the series, who looks human.

After Dora Talos is destroyed, Lamie, along with the rest of the Bandora Gang, are sealed away by Daizyujin and launched into space. While sealed away, Lamie and Grifforzer have a human-looking son, whom Bandora adores.

Lamie is a highly fierce fighter and wields a crescent shaped Lamie Bomerang as both as a blade and as a boomerang. Whenever she is enlarged, she tranforms into the more monstrous Lamie Scorpion. Also when around Lamie Grifforzer, who is usually very serious and commanding, turns smitten and comical. 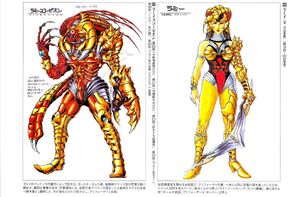 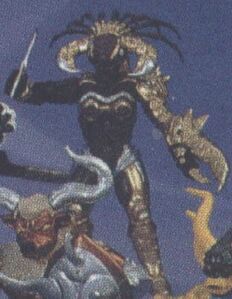 Monster form in footage.
Add a photo to this gallery

Retrieved from "https://villains.fandom.com/wiki/Lamie?oldid=3703302"
Community content is available under CC-BY-SA unless otherwise noted.