NOTE: This article is only for the original comics version of Lamplighter. To see the article for the TV show's version of him, go to Lamplighter (TV Series).

Member of The Seven (formerly)
Prisoner of Vought

Lamplighter is a minor antagonist of the controversial adult comic book series The Boys.

He was the original member of The Seven that was created by Vought-American. He served as the former enemy against the Boys during the time Mallory was in charge, he was also responsible for the group being active in secret after being beaten and then shot in the head by Mallory. He was resurrected by Vought-America but lost the brain function of a human being. He is Mallory's archenemy.

Just like the rest of the original members of The Seven, Lamplighter was born under Nazi experimentation and was given extreme amounts of Compound V during his mother's pregnancy. Later on, he became a member of The Seven with Homelander, Black Noir, Queen Maeve, A-Train, and The Deep. On 9/11, he injured both his ribs and lungs after colliding with a plane's wing.

During his time as a superhero, he fought against George Mallory and The Boys along with the Seven. This resulted in a cease-fire when Lamplighter murdered Mallory's grandchildren. Yet instead of stopping, Lamplighter decided to further antagonize The Boys, leading to them brutally beating him before Mallory executed him.

After his death, he was resurrected into a brainless zombie without higher brain functions, mindlessly playing with his own feces while confined in a secret room. For a while as a form of punishment, A-Train and Starlight were forced to feed him and clean his filthy room.

In the comics, Lamplighter seems to have a bad temper and the sadistic need to burn people alive for his gratification. He goes to the extreme by burning George Mallory's grandchildren as they bathed in a bathtub with no remorse as a form of retaliation against The Boys. However, after he was killed by them and resurrected by Vought, he became a mindless zombie with no high brain functions and kept imprisoned as a result. 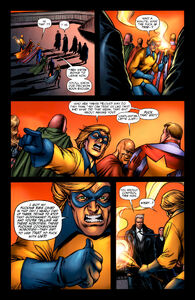 Lamplighter instigating The Boys, refusing the go through with the cease-fire. 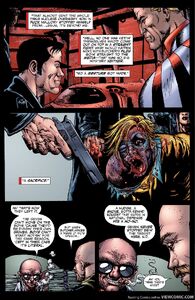 Lamplighter being beaten by Mallory. 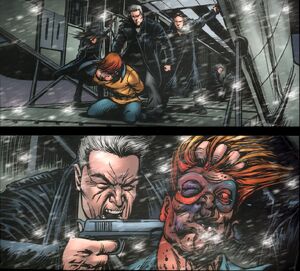 Lamplighter shortly before his demise. 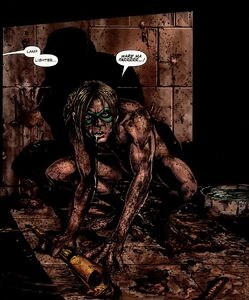