Start a Wiki
Lana is a professional wrestler and manager currently competing in WWE as a villainess.

She is an evil Russian villainess who dresses in business suits with very short skirts. She hates everything about America and plans to show everyone how inferior America and the rest of the world is to Russia. To do this she uses a brute of a man named Rusev to dominate all that stand in her way. She has a domineering power over Rusev, who operates on her command. During Rusev's matches she will eventually order him to finish his opponent after she is satisfied by the beating the opponent has taken. She will do this by telling him to CRUSH them by locking in a submission hold called The Acolade, a hold he will only release on her command.

Lana debuted with Rusev on the 7th April 2014 edition of RAW where he made quick work of an opponent. In the weeks and months to come she would frequently disrespect America and Americans, whilst praising Russia and its leader Vladimir Putin. Many wrestlers would try and defend America during this time by attempting to take down Lana and Rusev, but they would all fail and fall to them. On the 3rd November 2014 edition of RAW, Rusev would end up winning the WWE United States Championship, a win that thrilled Lana. They were now in possession of the United States Championship and Rusev was still undefeated in his matches, all the Americans who tried to stop them had failed so far, Lana was enjoying their dominance.

The situation made WWE mega star John Cena take notice, he was determined to take the United States Championship away from the evil Russian's control, and end Rusev's undefeated streak at the same time. Cena and Rusev would feud resulting in a match for the championship at Wrestlemania 31 on 29 March 2015. The match would end as Lana got up on the apron to distract John Cena, Rusev charged at Cena to try and attack him, but Cena moved out of the way. Rusev instead knocked Lana off the ring apron by accident, which lead to Cena taking control of the match and finally ending Rusev's undefeated streak nearly a year after he first debuted, but more importantly taking the United States Championship back to America.

In the latter part of 2015 Lana and Rusev became engaged, and would later marry the following year. In 2016 Lana began a feud with Brie Bella on the February 29th 2016 episode of Raw, when she interrupted Brie's interview by insulting not only Brie, but her husband, Daniel Bryan. She further mocked Brie after her loss to Naomi, and on March 7 Lana caused a distraction that led to Brie losing to Summer Rae. After the match, Lana attacked Brie with her own move, the Bella Buster.

In November 2015 Lana and Rusev started having issues with Enzo Amore and his tag team partner Big Cass, on the 5th December 2016 edition of RAW, Lana seduced Enzo backstage and told him to come to her hotel room. Enzo later showed up, but it was revealed to be a trap, as Rusev showed up and completely destroyed Enzo for trying to hook up with his wife, as Lana cheered in the background. Rusev then smashed a glass vase over Enzo's head and threw him out into the hotel hallway as Lana looked on with satisfaction. She then placed a do not disturb sign on the hotel door and closed it, perhaps indicating she really enjoyed watching the beating. At Tribute To The Troops 2016 Lana and Enzo were on the outside acting as managers for two seperate teams envolved in a tag team match. During the match Lana sneak attacked Enzo from behind by pushing him face first into the steel steps on the outside.

In 2017 Lana was drafted to Smackdown with a focus on being an in ring competitor rather than just managing. In June of that year she debuted and attacked the Women's Champion Naomi , causing her to lose her match, much to Lana's delight. Lana continued to compete in the ring for a couple of months, but it soon became clear that she was not as skilled as her opponents. No matter how hard she tried she could never pick up a victory and was often dispatched within a few minutes. This caused her to return to managing, and she quickly sided with the villainous Tamina and vowed to take her to the top of the Smackdown women's division. On the 29th August 2017 edition of Smackdown, the evil Lana made her managerial debut alongside Tamina, Lana cheered her on and ordered her to crush her opponent, which Tamina did very quickly. 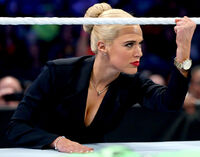 Smackdown 9 May 2014: Giving Rusev the order to CRUSH his opponent

RAW 12 May 2014: Telling patriotic WWE legend Hacksaw Jim Duggan to get on his knees... 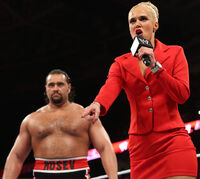 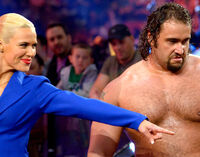 Extreme Rules 2014: Not satisfied yet, she orders Rusev to inflict more pain on his opponent post match 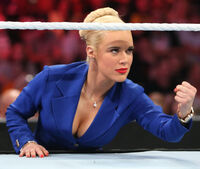 Payback 2014: Proudly holding the flag of her country

RAW 2 June 2014: On the stage, ready to speak disrespectfully about America 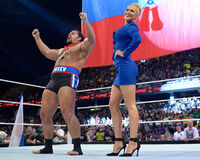 RAW 16 June 2014: Enjoying another dominant victory, with the Russian flag hanging behind her 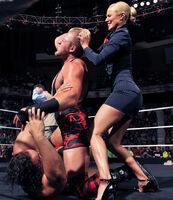 Battleground 2014: Showing the power she has, as she enjoys watching Rusev use The Acolade, as the referees tell her to stop him 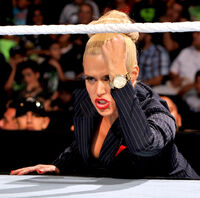 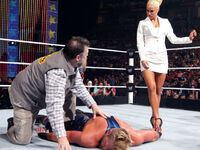 Smackdown 22 August 2014: Speaking to the audience, as yet another victim lies at her feet

Smackdown 21 November 2014: Not satisfied with just winning the match, she orders Rusev to lock in The Acolade... 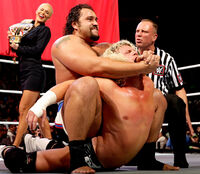 Smackdown 21 November 2014: ...which he does, a sight that gives the evil Russian great pleasure

Smackdown 26 December 2014: Enjoying the sight of yet more dominance 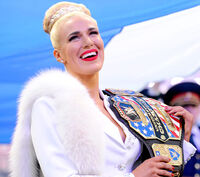 Wrestlemania 31: Confidently walking to the ring with the United States Championship 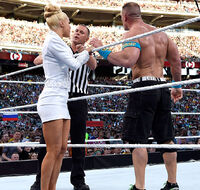 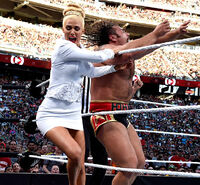 Wrestlemania 31: ...only to be knocked off the apron by Rusev accidently, resulting in his championship being taken and his undefeated streak finally ending after a year

RAW 7 March 2016: Sneak attacking Brie Bella with her own move, and feeling satisfied by it 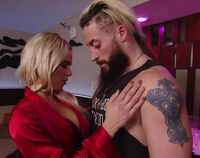 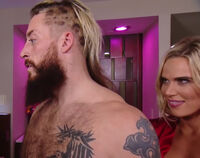 RAW 5 December 2016: ...the reveal that it was a trap. Rusev shows up and destroys Enzo as Lana enjoys it

RAW 5 December 2016: A defeated Enzo is thrown out of the hotel room as Lana looks on with satisfaction

Tribute To The Troops 2016: Lana pushes Enzo face first into the steel steps and smiles with satisfaction

Smackdown 6 June 2017: The evil Lana returns and attacks Naomi, causing her to lose the match 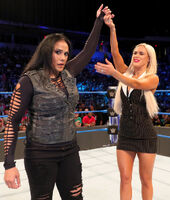 Smackdown 29 August 2017: The evil Lana manages Tamina for the first time, leading to a victory
Add a photo to this gallery
Retrieved from "https://villains.fandom.com/wiki/Lana_(WWE)?oldid=3539482"
Community content is available under CC-BY-SA unless otherwise noted.