She is Chris Griffin's teacher and a criminal. She desires to murder her husband Ronald.

She was voiced by Drew Barrymore, who also played Ivy in Poison Ivy, Sugar in Batman Forever and Sheila Hammond in Santa Clarita Diet.

Chris is instantly smitten with his new teacher, the voluptuous Mrs. Lana Lockhart. Chris asks his parents for advice on how to get a girl to like him, and Stewie gives him a condom, since he has heard about his relationship with his teacher. Lois tells him that he should be romantic, and Peter suggests that he should dress up as a naked spaceman to be spontaneous. When Chris shows up to class, Mrs. Lockhart is shocked and thinks he's being too impulsive.

When Lois is not pleased with this, she and Peter talk to Mrs. Lockhart, who finds out that Chris is in love with her. She reveals she had a feeling and promises to talk with Chris. At first, viewers believed that Mrs. Lockhart was simply trying to find a way to let Chris down as harshly as possible to tame any more urges to come on to her.

However, that night, she arrives at the Griffin house and reveals she fell for him, but she is married and will only be with him if he kills her husband, Ronald. When he arrives at her house, he informs her that cannot bring himself to do it, suggesting she simply get a divorce and secretly stay with Chris. This causes her to "dump" him and state she will carry it out herself. Her intentions to murder her husband turn out to be genuine, as she later had a bear maul him to death while he ate his breakfast.

When Lois finds the teacher's written instructions in Chris's laundry, she runs to Mrs. Lockhart's home and finds the body of her husband, who had been mauled to death by a local bear, whom she had apparently asked to do the deed. Believing Chris is the killer, Lois and Stewie conspire to cover up the plot by dumping the body in the lake and bluffing a policeman. Back at home, the rest of the family treats Chris differently because they believe he actually killed Mrs. Lockhart's husband, until it is shown on the news that it was really Mrs. Lockhart and the bear. Chris' family apologize to him while he wonders what happened to Mrs. Lockhart and the bear.

In the last scene, Mrs. Lockhart and the bear are found in a motel, with Mrs. Lockhart all dressed up for a nice evening dinner while the bear is lying on the bed watching television. The two engage in stereotypical passive-aggressive behavior. The bear insists that he going out for the night while watching his current show, snapping at her after she tries to insist. After she becomes sad, he attempts to ameliorate Mrs. Lockhart's disappointment by rubbing her back with his foot and saying, "Love yoooouuuu." And with that, the episode concludes. Their current whereabouts are unknown, as neither has been seen since then with the exception of Mrs. Lockhart having a non-speaking cameo during the musical number "Peter is Slow" in the episode "Petarded." 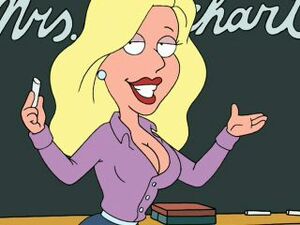