Yelling and abusing his chefs.

Kill the ambassador to Albania (succeeded).

He was voiced by Anthony Bourdain.

He is responsible for overseeing the dinner between the delegations of the U.S and Albania. Upon hearing of a vague threat to the ambassador of Albania (which was originally a hoax set up by Malory as an attempt to secure future contracts with the state department), ISIS was hired to do undercover security to make sure the dinner went smoothly.

Casteau belittled Lana, Ray, Cyril, and Archer for their lack of staying in character and criticisms as well as threw objects at Archer, Cyril, and Ray. Archer and Cyril had vegetables thrown there way, while Ray had a kitchen knife thrown at him when he complained to Casteau. However, Lance did show appreciation for Archer's cooking skills and likes his ability to create culinary dishes.

At the end of the episode, the Albanian ambassador dies as a result of Casteau lacing the rim of the glass the ambassador was drinking from with cyanide. In the confusion surrounding the Ambassador's death, Caseau slips away onto a helicopter piloted by Katya.

He explains by phone to Archer that the praise he gave earlier to him was a lie, and that he was paid six million dollars to kill the ambassador. His reasoning for doing do so was so he could create another show where he travels the world and try different foods. After a minor conversation with Barry and Katya, Katya tilts the helicopter which sends Casteau falling out of the aircraft. 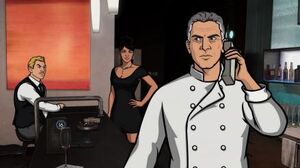 Lance on the phone.