Lancer is a tiny creature inside a knight armor and an antagonist in My Life as a Teenage Robot. Lancer is a greedy bandit who steals valuable things from others such as jewelry, money, and even clothing.

He was voiced by Quinton Flynn, who also played Axel in Kingdom Hearts and Henry Cooldown.

Lancer appears for the first time in Ear No Evil, where he attacks the people of Tremorton, robbing every one of their precious items. Jenny has to deal with him and her newly acquired big ears which benefit Lancer in battle.

He taunts Jenny for her big ears and makes everyone laugh at her. However, once Jenny gets rid of the ears she throws one at Lancer's weapon disabling him from attacking giving Jenny the chance to defeat him, causing his armor to explode. Lancer is revealed to be a small, big-eared elf in a jester costume who everyone laughs at and runs away in humiliation.

Lancer later returns in season 3 episode "The Legion of Evil", where he, the Mad Hammer Bros., Mudslinger, and Vladimir form into the Legion of Evil to share their vengeance against Jenny. But due to arguing and lack of planning they are foiled by Jenny. In the end, they are sent back to jail at the end of the episode. 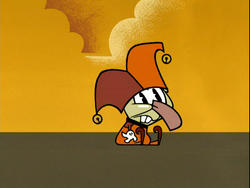 Lancer outside of his armor.
Add a photo to this gallery

Retrieved from "https://villains.fandom.com/wiki/Lancer?oldid=3837462"
Community content is available under CC-BY-SA unless otherwise noted.