Trying to be evil (formerly).

Impress his father and become "son of the month" (formerly; failed).
Help the Lightners (succeeded).

Lancer is one of the secondary antagonists (alongside Susie) turned supporting character of Deltarune: Chapter 1, a 2018 roleplaying game created by Toby Fox. He is the King and Queen's son and the prince of the Dark World.

When Kris and Susie first enter the Dark World, they both encounter Lancer, as a dark silhouette standing on top of a cliff. In mere seconds of their encounter, Lancer starts throwing magical spades at the duo. When Kris and Susie escape Lancer's barrage of spades, they end up in an empty town, where Ralsei, a "Prince from the Dark" lives.

While the two Lightners were speaking to Ralsei, Lancer interrupts them by ramming his bike into Ralsei and knocking him off-screen. A short battle between Kris, Susie, and Lancer begins. Kris and Susie can either spare Lancer or temporarily defeat him. If they prolong the battle with Lancer, he will eventually give up and retreat from the Lightners.

When Kris and Ralsei go into the Field, they repeatedly encounter Lancer. The latter left an abundant amount of signs scattered around the field, warning the Lightners and misleading them. Near the end of the Field, Susie threatens to eat Lancer's face, in the same way, she did to Kris. Lancer takes Susie's threat as helpful insight on how to be scary.

When the party reaches the end of the Great Board and defeats K. Round, Susie joins up with Lancer, and she becomes his friend. As Kris and Ralsei are trekking through the Forest, Susie and Lancer set up multiple ridiculous japes to try and foil the party. One of their japes was "tricking" the party into designing a "machine to thrash your ass".

When Lancer and Susie finish building the machine that the party designed, they blow it up to spite the party, and then they engage in a fight. Kris and Ralsei can win the fight against Susie and Lancer by persuading Lancer not to fight or hitting Lancer too many times. Once the fight is won, Susie rejoins with Kris and Ralsei, and Lancer joins the team.

While the party is approaching Card Castle, Lancer becomes worrisome, due to the fact that the party may have to fight his father, and that either he or the Lightners may get hurt. Due to his worries, Lancer flees from the party, and orders the Rudinns, the king's henchmen, to capture the Lightners.

While the party is in Card Castle's dungeon, Susie breaks out and confronts Lancer. The two former friends battle, with Lancer becoming more reluctant to fight Susie as the battle goes on. Eventually, Susie admits that she doesn't want to kill Lancer, and stops the fight. Susie swears to Lancer that she and the other heroes won't hurt the king, and Lancer decides to let the heroes go.

After the party deals with Rouxls Kaard and defeats the King (either by pacifying him or fighting him), Lancer reappears. If you don't fight the King, and you haven't hurt or defeated a single Darkner, Lancer storms the Card Castle with an entire infantry of the King's troops, and imprisons his father in the dungeon. In this ending of Deltarune: Chapter 1, Lancer becomes the new king of the Dark World.

If you've hurt or defeated the Darkners along your way to the King, Susie will pacify the King with Ralsei's "pacify" spell, and temporarily put him to sleep. After his father is pacified, Lancer says goodbye to the Lightners as they leave the Dark World.

Lancer is a short Darkner with a rounded torso and a tear-drop shaped head. Much like his father, the upper-half of his face is obscured by a spade. Also similarly to his father, he has a blue tongue that he always has sticking out of his mouth. However, Lancer's true face has a handsome lobed chin, two gleaming eyes, blue eyebrows and clean teeth.

Despite the King being a horrible and somewhat abusive father, Lancer still wants to earn his admiration and approval from his father figure. Lancer is the only person that truly loves the King, while everybody else despises him for his tyrannical rule. Lancer's respect for the King isn't mutual, since the King is rotten and horrible to everyone he encounters, even to his own son.

Susie and Lancer become close friends by the end of Deltarune: Chapter 1, since they both have much in common. They're both outcasts, who formerly had no real friends, and they're both regarded as "the bad guys". After Lancer captures the Lightners, Susie and Lancer's friendship is broken for a short period of time, since Susie believed that Lancer betrayed her. After Lancer states his true intentions, to keep the Lightners from harming the King, they become friends again.

Lancer views Rouxls as a secondary parental figure, due to the neglect and abuse he faces from the King. Rouxls however, pretends to not care for Lancer's wellbeing. If you talk to Rouxls in his shop, he will complain about being forced to babysit Lancer, saying that the King's son calls him "Lesser Dad", and he forces him to listen to his MP3's, which are all just cartoon splat sound effects. At the end of his rant, Rouxls will ask how he is doing anyways, proving that he really does care about the King's son.

Lancer is immature and foolish, as evidenced by his childish dialogue and his weak attempts of defeating the Lightners. One of the things Lancer seems to enjoy is aggravating people, as he repeatedly angers Rouxls Kaard by forcing him to listen to his MP3's. Lancer is intimidated by large people, since he's scared of K. Round, and his own father, who is five times as tall as him.

Despite sometimes being afraid of his father, Lancer views him as a role model and wants to impress him. Lancer is aware that the people of the Dark World only listen to Lancer because the King tells them to, he wishes genuine friendship, which is granted when he becomes close friends with Susie.

Vs. Lancer by Toby Fox

Lancer on his bike during his first boss fight. 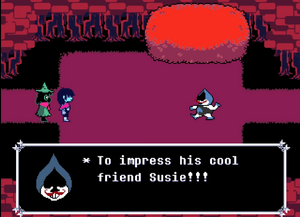 Lancer in his "disguise". 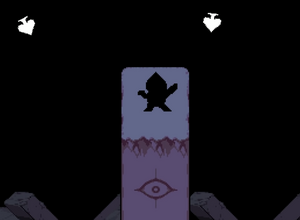 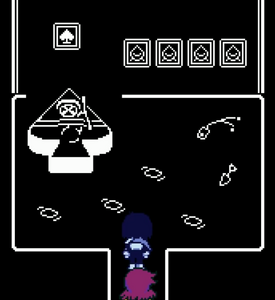 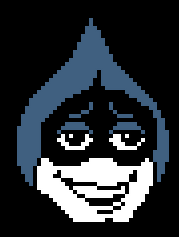