General of the Archanean Empire
Leader of the Grustian Occupation Army

Stealing wealth from his people

Lang is a deceitful and corrupt man who uses any power granted for his personal gratification. As both the Marquess of Adria and Occupying General of Grust, he frequently stole goods and wealth from the people under him. He also abducted young women for his own sex slaves.

Lang is also wrathful and impulsive, desiring to kill not only those involved the Grust rebellion, but their allies as well. In spite of his cruelty towards his subordinates, he is also a coward willing to betray his noble allies to ensure his survival.

Prior to the War of Shadows, Adria was allied with the Holy Kingdom of Archanea. However, Lang betrayed the Archanean royal family to the invading Dolhr Empire and killed many nobles in the process, such as Jeorge's father Noah, the Marquess of Menedy. With Dolhr's protection during the war, Lang pilfered the money and goods from the suffering Adrian public. Near the end of the war, Lang realized that the tides were turning against Dolhr and defected back to Archanea. At the war's end, Lang was spared justice by successfully convincing the newly crowned Princess Nyna and Emperor Hardin that he was forcibly pressed into Dolhr's service.

The nation of Grust, one of the allies of Dolhr during the War of Shadows, recovered briskly after the war's conclusion. As the heirs of Grust, Prince Jubello and Princess Yuliya, were too young, General Lorenz ruled as Grust's regent. Emperor Hardin, having corrupted by his deteriorating marriage with Nyna and the influence of the Darksphere, sent an army to occupy Grust, with Lang as administrator. In addition to continuing his regular pillaging of the populace, Lang sent men to abduct young girls and bring them back to his castle at Olbern. Lorenz eventually has enough of Lang's rule and forms a rebellion, which gains much support from the Grustian populace. However, it's strength is hindered by Lang's sanctions against Grust's military and is quickly suppressed, Lorenz himself suffering grievous wounds. Lang tasks Prince Marth, who arrived after recieving a letter from Hardin, to finish off Lorenz and bring him the heirs of Grust. However, Lorenz sent the twins away with the mercenary Ogma, and upon meeting Marth, warns him of Hardin's corruption before committing suicide. Later, Lang appears to Marth claiming that Ogma, Yubello, and Yumina were spotted in Macedon. He again asks Marth to return the royal twins, but Marth refuses. In response, Lang brands Marth a traitor and orders an invasion of Altea, an ordeal which resulted in the capture of Marth's sister, Princess Elice. Marth's wife, Princess Caeda, barely escapes the assault on Altea and notifies Marth, who decides to oust Lang and liberate Grust in retaliation. Lang retreats to Olbern Keep and plots to trap in foes in a pincer attack. He also orders who he believes to be the mercenary Navarre to ambush Marth's army when they open a specific door. Nonetheless, both plans end in failure and Lang is defeated.

Lang's portrait in Fire Emblem: Mystery of the Emblem.

Lang's battle sprite in Fire Emblem: Mystery of the Emblem.

Lang's portrait in Fire Emblem: New Mystery of the Emblem. 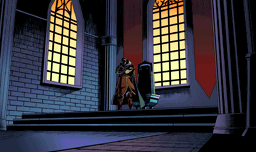 Lang occupying Olbern Keep.
Add a photo to this gallery

Retrieved from "https://villains.fandom.com/wiki/Lang?oldid=4211704"
Community content is available under CC-BY-SA unless otherwise noted.