Lang Rangler is a minor antagonist in JoJo's Bizarre Adventure: Stone Ocean. One of Enrico Pucci's assassins and an inmate in Green Dolphin Street Prison, he goes after Jolyne Cujoh and Weather Report in order to obtain Jotaro Kujo's Stand Disc for the priest's schemes. He wields the Stand known as Jumpin' Jack Flash.

He was voiced by Chikahiro Kobayashi in Japanese and Dave Wittenberg in English.

At a unknown point, Lang Rangler was imprisoned at Green Dolphin Street Prison for hijacking and stabbing his female professor sixty-nine times. Following his imprisonment and again at a unknown point in time, Lang accepted work under Pucci with orders to defeat Jolyne and fetch him Jotaro's Stand Disc in order to keep it away from the Speedwagon Foundation.

Lang makes his first appearance in JoJo's Bizarre Adventure: Stone Ocean as Jolyne, Weather Report, and Emporio head out to give Jotaro's Stand Disc to Savage Garden, stalking the heroes from the shadows. Lang chases after them attempting to spit on Jolyne, but the heroes eventually escape, although Jolyne is eventually caught in Jumpin' Jack Flash's effects after heading to the factory to get her boots fixed up.

While floating around by herself, Lang manages to snatch Jotaro's Stand Disc and makes a break for it inside the factory, with Weather Report eventually scuffling with the man and his Stand's centrifuges. When this fails, Lang tries to fight Weather Report directly, only for the air resistance to set his hands alight. Turning off gravity while security alarms are sounded by the falling objects, Lang escapes by using objects to launch him through the closing gate, although the heroes are already on his tail towards the factory.

Eventually, the air around the heroes itself becomes affected as Jolyne's and Weather's blood spills from them, and as they are busy attending to this, Lang tries and fails to land more hits with his centrifuges. Weather eventually makes suits of condensed air for himself and his ally as they begin to truly trail Lang, with Lang on the while continuing to fire away. Eventually, ricocheting scrap metal hits a drum of oil, sending it crashing towards Weather. Lang then tries to use more scrap metal against Jolyne, these being deflected to some rats, who's bloody wounds blind Jolyne.

A job assumingly done, Lang begins to leave the heroes to their fate as he wonders if he can even take down Whitesnake, although his attention is caught by strings made by Stone Free around his centrifuges. Thrown back into the weightless arena, Lang uses a stored bottle, disinfectant, and manganese dioxide to create a bottle of pure oxygen, which he uses to break Jolyne's suit as Lang plans to attempt to flee once more, only for Weather Report to summon wind to blow Lang straight into an barrage of fists gifted to him by Stone Free. Lang is send flying towards a laundry basket, with Jolyne not only able to use his entry pass and hat to make her way to the courtyard, but stop his and Pucci's attempts to keep the Stand Disc away from being delivered back to the Speedwagon Foundation.

Being fairly tall with a slim build, Lang Rangler wears a strange brown jumpsuit to guard against the abilities his Stand has, with a brown bag-like mask (alongside yellow goggles with blue glasses) covering the top half of his face (including his eyes and ears), a rocket-shaped set of holes in the chest with a smaller buckle of them under them, orange strips going down the limbs, "G.D. st. Jail" written in white text on the back, and holes cut out for his fingers and toes. Around his legs also are two red sneakers tied by their laces, which Lang uses to store items.

Despite his positive of calculating his fights, Lang Rangler is an arrogant, violent man with a taste for murder and a willingness to betray Enrico Pucci due to seeing himself as being more powerful than him.

Once Lang Rangler spits on someone, Jumpin' Jack Flash is able to both have the target and everything that target touches be not affected by gravity, causing them to float as if in space. In the process of doing so, Lang is able to essentially create a airless vacuum by air not being affected by gravity (slowly suffocating the target and both boiling/sucking away their blood) and allows objects that have air in them to become highly explosive. Despite this first ability allowing Lang to nimbly cross space affected by his Stand and Lang being able to freely toggle this ability on and off regarding specific, the lack of oxygen is also deadly to himself, so he must keep a safe distance in order to remain unaffected by his Stand's abilities. Jumpin' Jack Flash also has the ability to use two small centrifuges on it's arms and Lang's arms if summoned, allowing it to store objects to later fire at great speed.

Lang himself is not only a skilled shot with this ability, but he also has suction-cup like tips on his fingers and toes, allowing him to navigate his zero-gravity environments with ease. 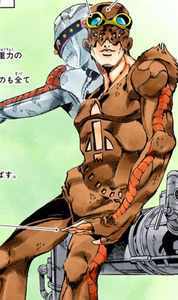 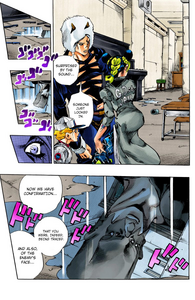 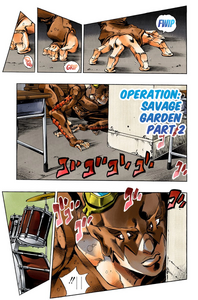 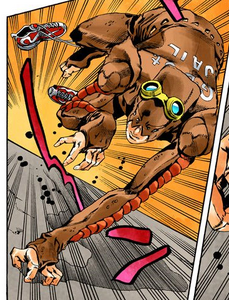 Lang Rangler on the move. 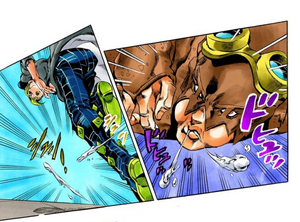 Lang Rangler spitting at Jolyne to activate his Stand's effects. 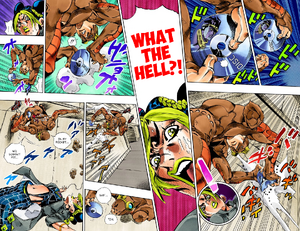 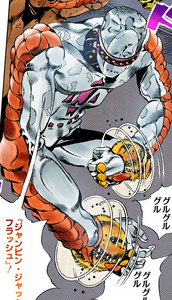 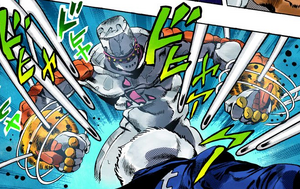 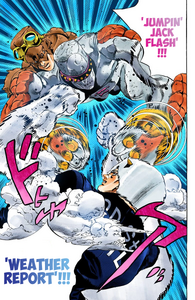 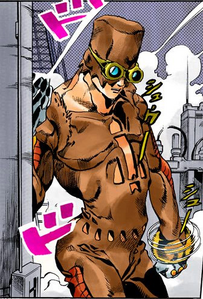 Lang Rangler with his goggles on. 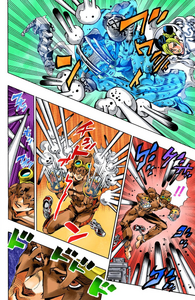 Lang Rangler deflecting some of his rebound shots. 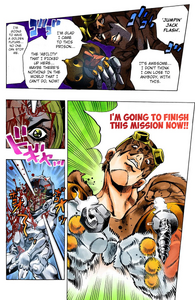 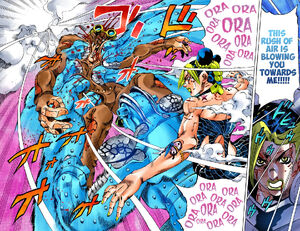 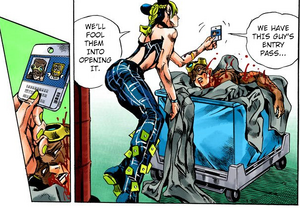 Lang Rangler's defeat, as well as his identity card. 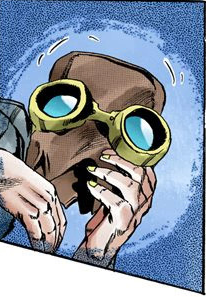